When there is a downturn in the financial cycle, banks restrict credit in anticipation of an increase in risks and related provisions. Macroprudential authorities have a specific instrument at their disposal to deal with this: the countercyclical capital buffer (CCyB). During favourable periods, the CCyB can be increased to impose additional capital holdings on banks, which can then be used during unfavourable periods to absorb losses and ensure an appropriate supply of financing to the economy. Nevertheless, the concern remains that increasing the CCyB could burden the economy with a cost that far outweighs the expected benefits. These fears are unwarranted however: countries that have activated the CCyB have experienced no negative effects and now have widened the policy space that could respond to potential crises. As a precautionary measure, the French macroprudential authority, the Haut Conseil de stabilité financière (HCSF – High Council for Financial Stability), recently increased the countercyclical capital buffer in two steps. 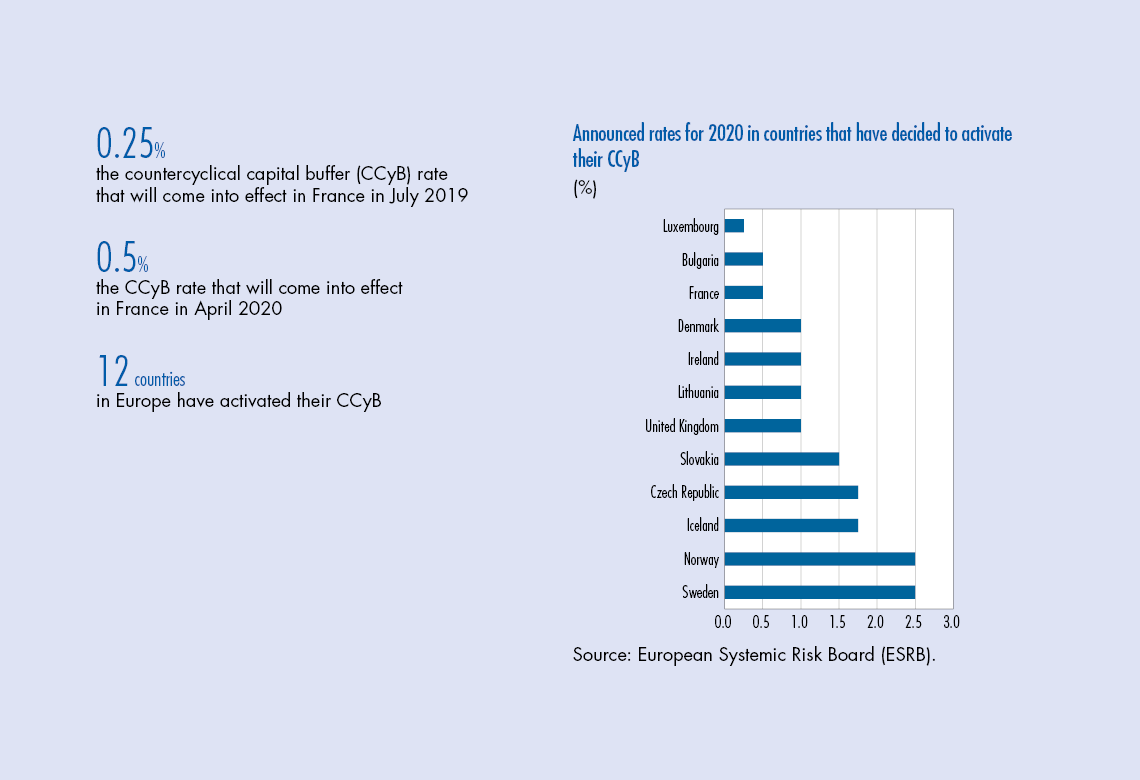 1 What is the objective of the countercyclical capital buffer?

The countercyclical capital buffer (CCyB) is a regulatory capital adequacy requirement applied to banks, whose rate can vary between 0% and 2.5% of risk weighted assets and which should be increased during the upswing of the financial cycle and relaxed during a downturn. The CCyB is activated in addition to other regulatory requirements, which taken together define the minimum solvency ratio imposed on banks (see Box 1). It was introduced in the European Union on 1 January 2016, and is set in France by the Haut Conseil de stabilité financière (HCSF – High Council for Financial Stability) on a quarterly basis.

The underlying logic of the CCyB is to mitigate the procyclicality of banking sector capital, notably observed before and during the great financial crisis of 2008. When the business cycle is bullish, there is an increase in financing and transactional needs while credit risks are perceived to be low. This can lead to a boom in the financial cycle, with excessive and increasingly risky lending, which diminishes banks’ capacity to absorb future losses. In the event of a crisis, risks materialize and the losses suffered eat away at banks’ capital, while investors demand sounder finances. As raising capital in this type of situation is difficult and costly, banks have to restrict their lending in order to comply with regulatory capital adequacy requirements or market expectations. As a result of a lack of financing, enterprises and households are constrained to reduce their spending and even forced towards bankruptcy, with extremely adverse repercussions for the economy. The CCyB aims to counter the procyclicality of banking sector capital to support “the sustainable provision of credit to the real economy throughout the financial cycle”.
The CCyB activation strategy adopted by macroprudential authorities is therefore underpinned by (i) the primary objective of strengthening the resilience of banks in order to limit credit restrictions during crises and (ii) a secondary objective of leaning against excessive lending during the upswing of the cycle.

The CCyB strengthens the resilience of banks

Increasing the CCyB during the upswing of the financial cycle encourages an accumulation of capital at the most opportune moment, as: