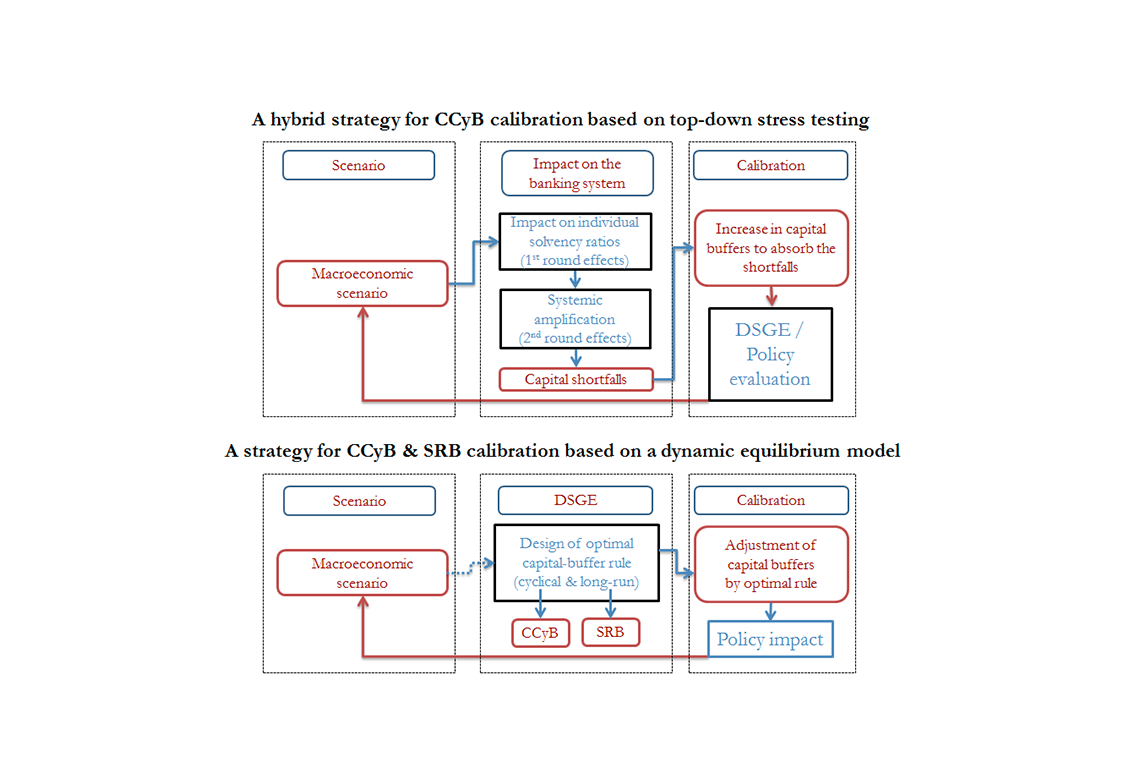 The implementation of macroprudential policy poses a number of challenges to policymakers. A major one relates to the development of an analytical framework to inform the macroprudential decision-making process and guide the calibration of macroprudential buffers. This paper presents the tools developed at the Financial Stability Directorate of the Banque de France to guide the calibration of two macroprudential instruments of the CRD IV that are at the disposal of the French macroprudential authority:  the countercyclical capital buffer (CCyB) and the systemic risk buffer (SRB). Both buffers are Common Equity Tier 1 capital requirements. The CCyB is a time-varying buffer that aims to protect the banking sector from periods of excess aggregate credit growth as well as at leaning against the credit cycle. The SRB is a ‘structural’ capital requirement that aims at preventing or mitigating systemic risks of a non-cyclical nature.

We start by describing our framework for scenario design. Baseline and adverse scenarios are key ingredients to place a calibration exercise into the current and perspective macroeconomic context, and a crucial component of one of our strategies to macroprudential calibration – the “hybrid” approach that relies on stress testing tools. In particular, we describe how systemic risk analysis through early warning models [EWM] can be used to inform the design of the adverse scenario.

In addition to EWM, our analytical framework relies on several complementary models. A first class of models –at the heart of our “hybrid” calibration strategy– consists of a sequence of modules in the spirit of top down stress tests. Our framework builds on Henry and Kok (2013) and on Dees et al. (2017). It consists of several complementary modules that quantify the impact of an adverse scenario on individual banks’ balance sheets through the calculation of first-round capital losses and the impact on risk-weighted assets. We then aggregate the individual results and test whether projected systemwide capital ratios remain above a threshold level throughout the adverse event. Finally, the framework integrates a counterfactual analysis of the macroeconomic impact of any additional capital requirements that the policymaker may consider introducing based on the stress testing results.

A second class of models consists of contagion simulations. They can be used within the hybrid approach to quantify the systemic amplification that could follow after first-round bank losses in an adverse scenario, e.g., because of interbank contagion or asset fire sales.

A third class of models consists of dynamic stochastic general equilibrium (DSGE) models with costly financial intermediation, as in Clerc et al. (2015) or Gerali et al. (2010). These models are used for four distinct goals: (i) a structural calibration of the CCyB by the optimization of a given objective, e.g., the maximization of social welfare or the minimization of credit volatility; (ii) the design of adverse scenarios in the hybrid calibration strategy for the CCyB; (iii) a counterfactual analysis of the macroeconomic consequences of activating a CCyB in the hybrid calibration approach; (iv) a structural calibration of the SRB, through identification of long-run costs and benefits to a permanent change in capital requirements.

We conclude with a quantitative illustration of the calibration strategies at our disposal: two structural strategies based on DSGE models (used to calibrate both the CCyB and the SRB), and a hybrid strategy relying on our top-down stress test framework (used to calibrate the CCyB). The next figure provides a visual description of the two strategies. We conclude by emphasizing that expert judgment retains a crucial role for calibration. Expert judgment is central to the design of relevant scenarios as well as in the definition of the objective function of the macroprudential authority.