Working Paper Series no. 715: Are global value chains receding? The jury is still out. Key findings from the analysis of deflated world trade in parts and components

In this article, we examine the dynamics of Global Value Chains (GVCs) since the 2000s. Did it show a marked expansion up to the Great Recession and did GVCs begin a downturn in the 2010s? To better understand the evolution of GVCs at the world level, we use very detailed trade data for 2000 to 2016, which distinguishes different production stages along the GVC. In particular, among intermediate goods, we focus on Parts and Components (P&C) rather than semi-finished products since the manufacture of P&C corresponds to activities more embedded in GVCs. We control, also, for the global business cycle and price effects using an original production stages deflator based on detailed bilateral trade unit-values. This new GVC indicator shows moderate growth over the study period with no trend reversal. 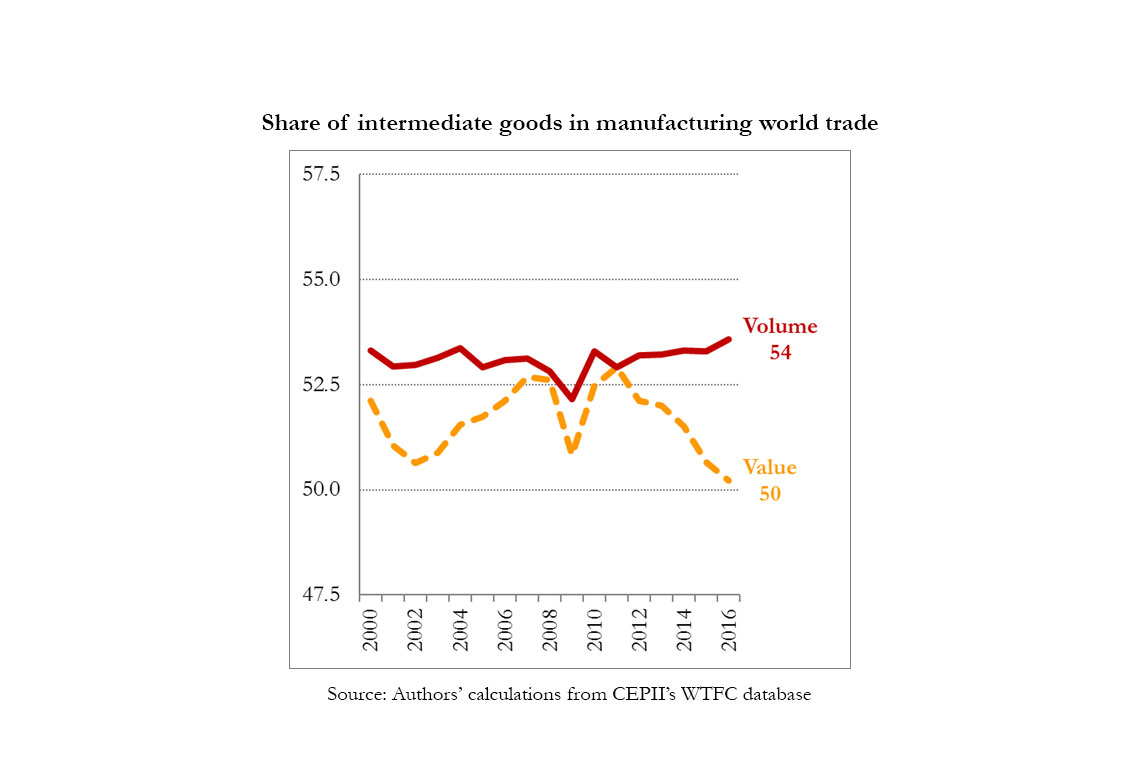 Over the period 2000-2016, the share of intermediate goods in world trade in nominal terms is fairly well correlated to various Global Value Chain (GVC) indicators based on international input-output matrices: a moderate expansion of international fragmentation followed by a decline from 2011 onwards.

However, taking into account price effects (using an original deflator by production stages based on very detailed and harmonised bilateral trade unit-values), our results show a different evolution: the intermediate trade share in volume is growing at a subdued rate between 2000 and 2016.

Focusing on the manufacture of Parts and Components (P&C), which corresponds to activities more embedded in GVCs than other intermediate goods, that is, semi-finished products, the same pattern emerges, namely a slight increase in the share of P&C in manufacturing world trade in volume. Furthermore, after controlling for the global business cycle, there is a modest but steady rise, with no sign of a downturn after the Great Recession.

GVCs are particularly well-developed for electronics, the share of this sector in P&C trade being the highest and remaining stable over the period. However, subsectors exhibit contrasting developments: P&C trade related to office machinery and computers receded while trade in telecommunications equipment, the flagship IT revolution industry, thrived.

Counts of clients or suppliers by stages of production indicate a higher and growing geographical diversity for P&C..

publication
Working Paper Series no. 715: Are global value chains receding? The jury is still out. Key findings from the analysis of deflated world trade in parts and components
Download (EN)