Working Paper Series no. 810: Bankruptcy Costs and the Design of Preventive Restructuring Procedures

A European directive requires Member States to give firms access to preventive restructuring procedures. This paper assesses the interest of a procedure distinct from that for insolvent firms. It is based on the French experience, where a preventive procedure has coexisted with the more common restructuring procedure since 2006. The spatial and temporal heterogeneity of the Commercial Courts' decisions allows the identification of the causal impact of the conversion from the preventive procedure to the common one on the firm's survival chances. Using an (almost) exhaustive sample of preventive bankruptcy fillings over 2010-2016, we show that conversion reduces the probability of firm survival by 50 p.p., which corresponds to indirect bankruptcy costs of around 20% of the firm assets. Our interpretation is that the low restructuring rate under the common bankruptcy procedure may alarm some of the firm's stakeholders, especially its customers. This in turn aggravates the firm's difficulties and reduces its chances of restructuring under the common procedure. We provide some empirical evidence to support this interpretation. A distinct preventive procedure helps prevent this spiral. 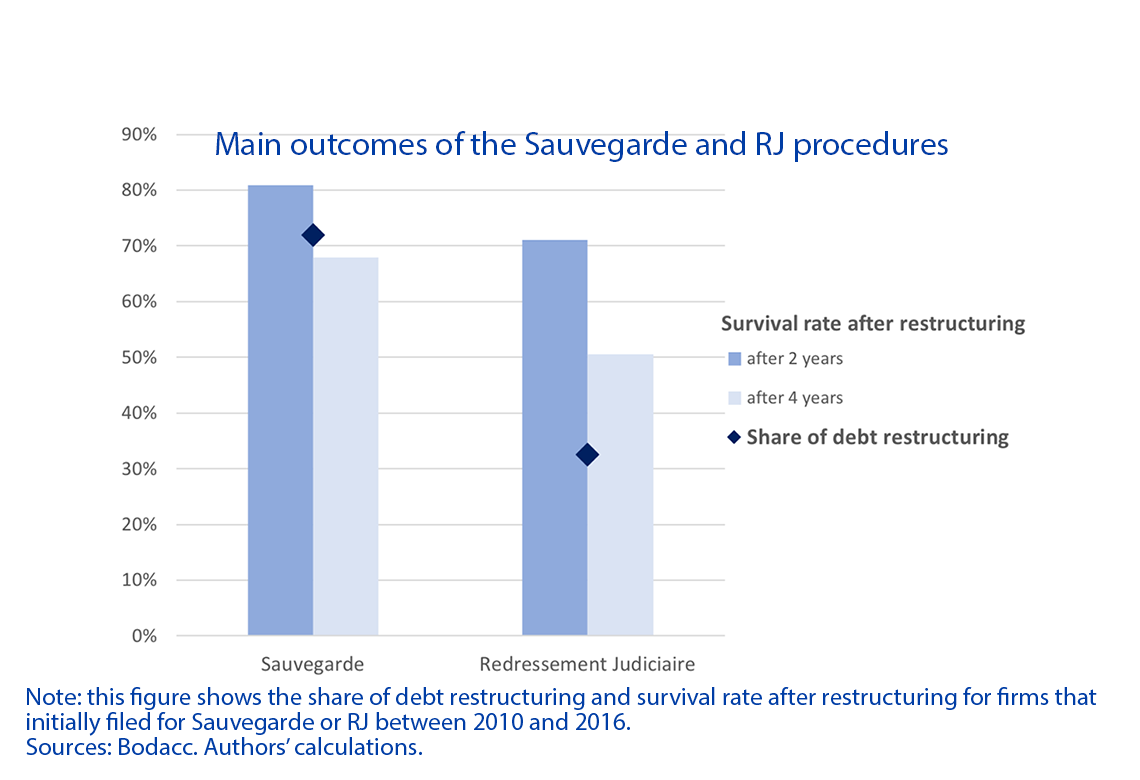 In 2019, an EU directive invited Member States to introduce into their commercial laws a court-supervised preventive procedure for businesses. The rationale for preventive restructuring is that the sooner a firm's difficulties are addressed, the greater its chances of survival. There are two ways of introducing a preventive procedure into commercial law: one can either just extend existing bankruptcy procedures to allow firms that are on the verge of insolvency to file for it –  as is the case in US Chapter 11 –  or create a specific procedure exclusively for these firms.

In this paper, on the basis of an empirical analysis on the French experience, we argue that it might be more efficient to create a specific procedure, notably if the existing bankruptcy procedure entails low survival rates. The reason is that the specific procedure would serve as a signal for stakeholders that firms allowed to file for it are in a relatively better financial situation than firms entering the regular bankruptcy procedure. That would help reduce indirect bankruptcy costs and thus preserve the survival chance of these firms.

To conduct our analysis, we take advantage of the coexistence in France of two court-supervised debt-restructuring bankruptcy procedures: the Redresssement Judiciaire (RJ) for insolvent firms, and the “Sauvegarde” procedure available since 2006 to firms that are not yet insolvent. These two bankruptcy procedures yield radically different results in terms of the success of debt restructuring. We use the fact that commercial courts convert some cases from the “good” bankruptcy procedure (Sauvegarde) to the “not as good” one (RJ) to identify the reduced restructuring chances associated with conversion to RJ. Our identification strategy relies on the heterogeneity in the Court conversion rates resulting from dfference in interpretation of the law, as the exact trigger for conversion may be interpreted differently across courts and over time. This heterogeneity remains substantial even when we control for local firm characteristics and economic conditions. Our empirical results suggest that conversion to RJ reduces the chance of debt restructuring by 50 percentage points, which correspond to about 20% of the total book asset value of the firm.