We incorporate external information extracted from the European Central Bank's Survey of Professional Forecasters into the predictions of a Bayesian VAR, using entropic tilting and soft conditioning. The resulting conditional forecasts significantly improve the plain BVAR point and density forecasts. Importantly, we do not restrict the forecasts at a specific quarterly horizon, but their possible paths over several horizons jointly, as the survey information comes in the form of one- and two-year-ahead expectations. Besides improving the accuracy of the variable that we target, the spillover effects to ``other-than-targeted'' variables are relevant in size and statistically significant. We document that the baseline BVAR exhibits an upward bias for GDP growth after the financial crisis and our results provide evidence that survey forecasts can help mitigate the effects of structural breaks on the forecasting performance of a popular macroeconometric model. 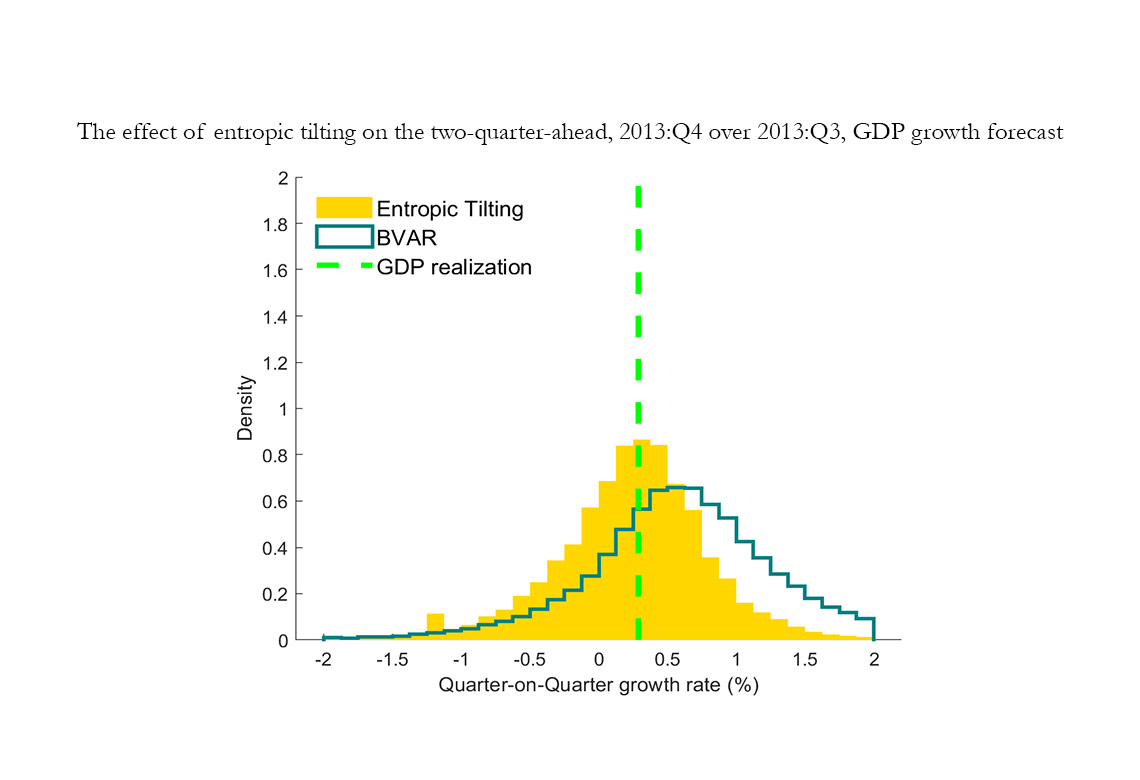 Central banks conduct surveys in which they ask forecasters of the private sector for their predictions. It is known that, when averaging the predictions of these survey panelists, i.e. the "consensus forecast", these predictions also provide precise forecasts of key macroeconomic variables. Unfortunately, due to the limited scope of the surveys, to which participation is voluntary, these survey predictions are usually not available for all forecast horizons or variables of interest. On the other hand, it is straightforward to generate predictions from statistical models for any variable at any forecast horizon. The recent forecasting literature, therefore, tries to bridge this gap by incorporating external information into statistical models, to benefit from the quality of survey forecasts beyond the scope of the surveys itself.

In this paper, we use two existing methods, called "entropic tilting", and "soft conditioning", to incorporate external information, coming from survey forecasts, into the forecasts of a Vector Autoregressive (VAR) model. A VAR model is a statistical model that allows to model a set of variables in a dynamic form. As it allows modelling the dynamics of more than one variable it is a multi-variate model, i.e. we can model the dynamics of real GDP growth, HICP inflation and the unemployment rate jointly in a system of equations. The model is called dynamic because it allows for a relationship between past, future and present values of the variables.

The variables we use in the baseline VAR are real GDP growth, HICP inflation, the unemployment rate and the Euribor (a benchmark for the interbank interest rate). The VAR provides us with forecasts of the mean, i.e. a "point forecast", and also provides us with a forecast of the uncertainty surrounding the mean, which we subsequently call a "density forecast".

We find that incorporating one- and two-year-ahead survey expectations on GDP growth, HICP inflation and the unemployment rate considerably improves predictive accuracy. Improvements are statistically and economically significant and the results hold for both point and density forecasts. In addition to improvements in the forecast accuracy of the variable for which external information is used, spillover effects to the other variables are positive in terms of predictive accuracy, often statistically significant and qualitatively similar across the two methods. We provide evidence that around the two recent euro area recessions, as well as the slow recovery thereafter, SPF panelists predicted GDP growth more accurately than a VAR model, hence integrating this information into the econometric model's forecasts leads to considerable gains. Importantly, our results do not advocate abandoning VARs for forecasting, as the "tilting procedure" relies directly on the dynamics of the VAR. Instead, we consider the incorporation of additional information as a simple way to correct possible misspecifications in an otherwise useful model.

We take the external forecasts from the Survey of Professional Forecasters (SPF), which is conducted quarterly by the ECB. Our sample of SPF forecasts ranges from 1999:Q1 to 2017:Q3. More information about the survey can be found on the website of the ECB.

The first method, entropic tilting, is based on a paper by Robertson et al. (2005). In simple terms, the method allows to impose restrictions on (i) the year-on-year point forecast, i.e. the expected growth over the next year, and also (ii) the uncertainty surrounding this forecast. Because in a dynamic model the values of the variables depend on each other across time, by restricting the year-on-year point forecast and uncertainty, we indirectly impose restrictions on other forecast horizons as well.