We analyse the propagation of carbon taxation through input-output production networks. To do so, we use a static multi-sector general equilibrium model including France, the rest of the European Union and the rest of the world to simulate the impact of carbon tax scenarios on economic activity. We find that a tax increase on sectors' and households' greenhouse gas emissions corresponding to a carbon price of 100 euros per ton of carbon dioxide equivalent entails a decrease in French aggregate real value added by 1.2% at a 5-to-10-year horizon when implemented in France only, vs. 1.5% when implemented in the whole EU. Impacts on sectoral real value added range from -20% to negligible. The most affected sectors are generally the most polluting ones, but the tax also propagates across sectors via intermediate inputs. Specifically, the network structure tends to affect comparatively more upstream sectors than downstream ones, given their taxation levels. International financial markets also play an important role by neutralizing the positive response of final demand that would result from the redistribution of the tax proceeds to domestic households. 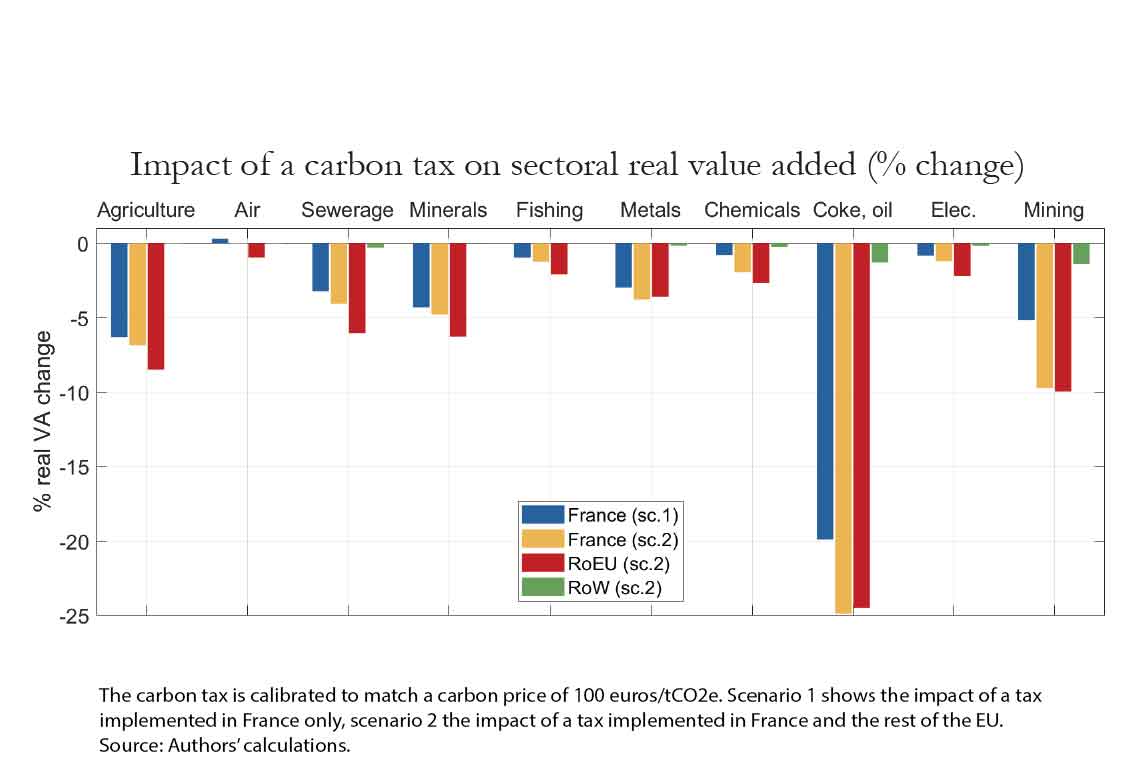 While issues related to climate change and environment become more and more present in the public debate, there is a political will to encourage a transition towards a greener economy, and a wide range of countries have committed to greenhouse gas emissions reduction objectives within the Paris Agreement. One of the instruments often mentioned to achieve these objectives is a carbon tax. Central banks and international organisations have also started to engage in the matter. In particular, financial supervisors need tools to build adverse low-carbon transition scenarios disaggregated at the sectoral level to evaluate the resilience of financial systems against the implementation of large-scale climate policies.

This paper focuses on the implications for carbon taxation of disaggregrating production into interconnected sectors in a macroeconomic model. We build a static general equilibrium model embedding an input-output production network for the world economy and allowing substitution across intermediate inputs entering production and across final consumption goods. We analyse the propagation of various carbon taxes throughout this network.

We calibrate the model for three regions, namely France, the rest of the European Union and the rest of the world, each including 55 sectors. The model includes three types of climate-related tax. The first two types of taxes cover firms' greenhouse gas emissions with sector-specific rates. One is a tax on firms' fossil energy purchases and induces a substitution towards cleaner energy sources within firms. The other one covers firms' emissions that are inherent to their production activity (like methane produced by cows for farming or carbon dioxide generated by the chemical reactions involved in cement manufacture). The third tax applies to households' refined oil purchases. Carbon tax scenarios considered in the paper involve all three taxes, calibrated so as to correspond to a benchmark price of 100 euros per ton of carbon dioxide equivalent.

We consider two scenarios. First, we look at the impact of a carbon tax implemented in France only (scenario 1). We find a decrease in French aggregate value added by 1.2%, with effects on sectoral real value added ranging from -20% (in the Coke and refined petroleum sector) to negligible. Second, we consider a carbon tax implemented in the whole European Union (scenario 2). In that case, aggregate value added drops by 1.5% in France and by 2% in the rest of the EU. Sectoral impacts show a pattern similar to the first scenario, apart from a few differences.

Our sectoral results reflect the characteristics of the production network represented in the model. While the most impacted sectors are generally the most polluting ones, the tax also propagates across sectors via intermediate inputs. In the end, the network structure tends to affect comparatively more upstream sectors than downstream ones, given their taxation levels: some sectors, such as Mining and quarrying or Chemical products, are disproportionately harmed, whereas relatively high-polluting ones like Health, Education or Trade and repair of motor vehicles are hardly affected.