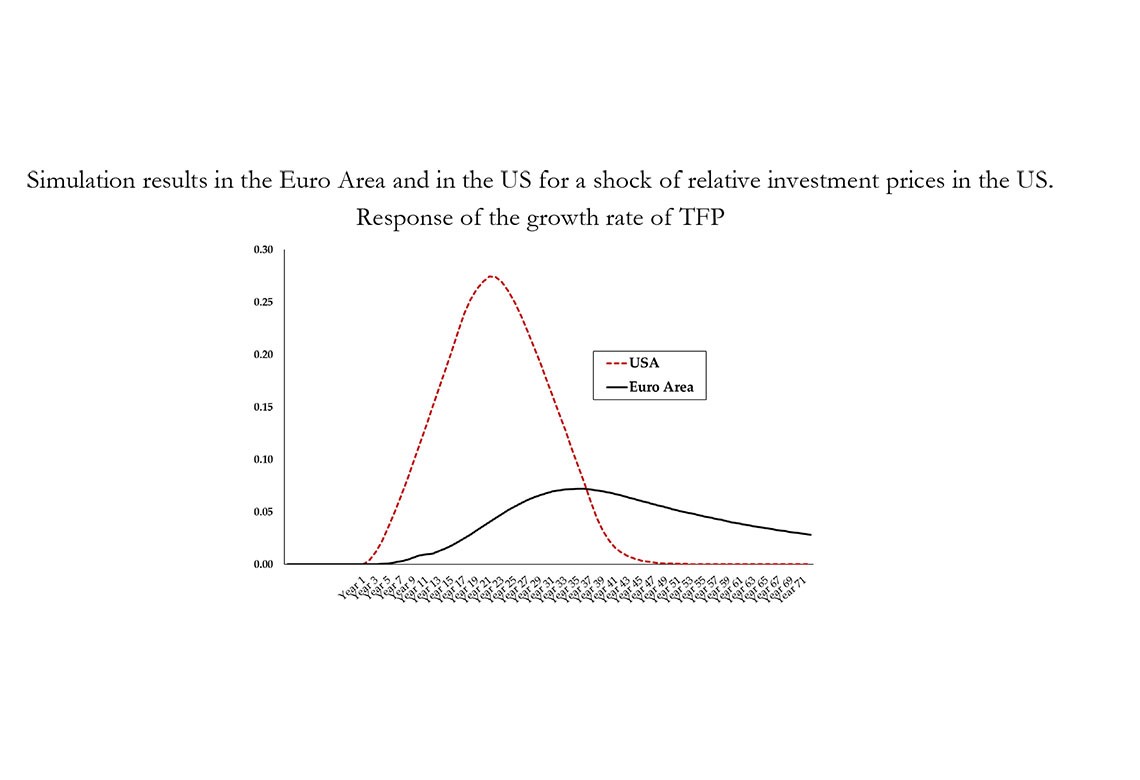 Economic growth in all advanced countries has slowed continuously since the 1970s and has fallen to a historical low since the Great Recession. This secular slowdown is mainly the result of weaker growth in total factor productivity whose widespread stagnation is difficult to interpret with a standard growth framework. The picture becomes even more puzzling if we consider the diversity of productivity levels, of new technology diffusion, of average human capital and of openness to trade across all advanced countries, which are all affected by a slowdown. Such a shared TFP trend in a context of significant structural heterogeneity suggests that a common global factor could be at play.

In this paper, we investigate one possible explanation: the decline in long-term real interest rates observed since the early 1990s in all developed countries. Specifically, we discuss and test the existence of a circular relationship between interest rates and productivity growth. It is of course well-known that productivity is a long-term determinant of return on capital and thereby of interest rates, which explains a positive correlation between these two quantities. But we argue that this is only one side of the coin as interest rates are also a determinant of the minimum expected return from investment projects, and therefore of the productivity level required for such an investment. The decline in long-term real interest rates, notably due to negative demographic pressures, may have led to a slowdown in productivity by making an increasing number of weakly-productive companies and projects profitable (we refer to this mechanism as the ``cleansing effect'').

If this channel dominates the negative impact of tougher financial constraints on innovation financing, a negative permanent shock on interest rates, for example due to population aging, would indeed lead to a secular fall in productivity growth. This fall would in turn lead to a decline in interest rates and create a circular relationship between these two indicators that ultimately would converge to a steady-state characterized by low growth and low interest rates. When real interest rates are low (as it has been the case for several decades), it is likely that this second channel will dominates the first one. In this case, only a technology shock could disrupt this downward spiral.

In order to test this mechanism, and in particular the existence of a circular relationship between real interest rates and TFP growth, we take a long run view. We first rely on the the Long Term Productivity database built by Bergeaud et al. (2016) which provides comparable cross-country TFP estimates from the end of the 19th century, and on the work of Jorda et al. (2017). We estimate this circular relationship by cross-country panel regressions using annual data on a sample of 17 advanced countries over the period 1950-2017. We jointly estimate the two relationships (from real interest rates to productivity growth and from productivity growth to real interest rates) using different methods and use the point estimates to look at the past and the future.

Our results hint at the existence of a circular relationship that results in a secular stagnation equilibrium: a situation where productivity grows slowly and where real interest rates are low. Between the two sub-periods 1984-1995 and 2005-2016, TFP annual growth declined by about 0.66pp in the United States and 1.51pp in the euro area and the contribution of real interest rates that we estimate fell by 0.6pp and 0.56pp respectively. While of course other factors are at play during this period, and in particular, in the case of the euro area, a slowdown in human capital stock, such contributions suggest that real interest rates could account for a significant share of the productivity slowdown.

One way to break out of this circular relationship is via a new technological revolution linked to the digital economy, or, in countries where there is still room for convergence, via structural reforms to improve the diffusion of new technologies. Using our estimate results, we propose some simulations to test the impact of such shocks in the frontier economy. The results from these simulations confirm the intuition. We assess the impact of a negative shock on relative equipment prices with a magnitude that could be comparable to the ``ICT shock'' in the United States between 1985 and 2007 (cf. figures below). This shock would be enough to escape the secular stagnation trap, with TFP growth higher than the baseline rate by 0.6pp at the peak. This technology shock in the United States would spread to other countries through the catching-up process and lead to a slow but lasting acceleration in TFP, as its level converges with that of the United States. In the euro area, TFP growth relative to the baseline reaches a peak of 0.2pp, about ten years after the US peak.

The global economy will face several headwinds in the foreseeable future (see Gordon, 2010). In particular, significant productivity growth would be required to finance the energy transition towards a more sustainable growth, to lead to an ordered decrease in the crisis-inherited high debt level and to face the consequences of an aging population. This technology shock, the impact of which would be maximised by the low interest rate environment, would hence be necessary to be able to face these headwinds with confidence. The debate on its emergence is still highly controversial among economists, but as the after-effects of the crisis on productivity growth vanish, a clearer view of what we can expect in the coming years should be warranted.