This paper studies whether greater competition can mitigate agency problems within banks. We measure the intensity of the agency conflict within a bank by the volume of loans that the bank lends to its insiders (e.g., executives). We first check that these loans are a form of private benefit. By exploiting interstate branching deregulation, we then show that banks react to greater competition by reducing insider lending, especially when the entry of new competitors may more strongly affect bank profitability. Results are robust to using various identification approaches and alternative indicators of agency conflict. We conclude that competitive pressure reduces managerial self-dealing. 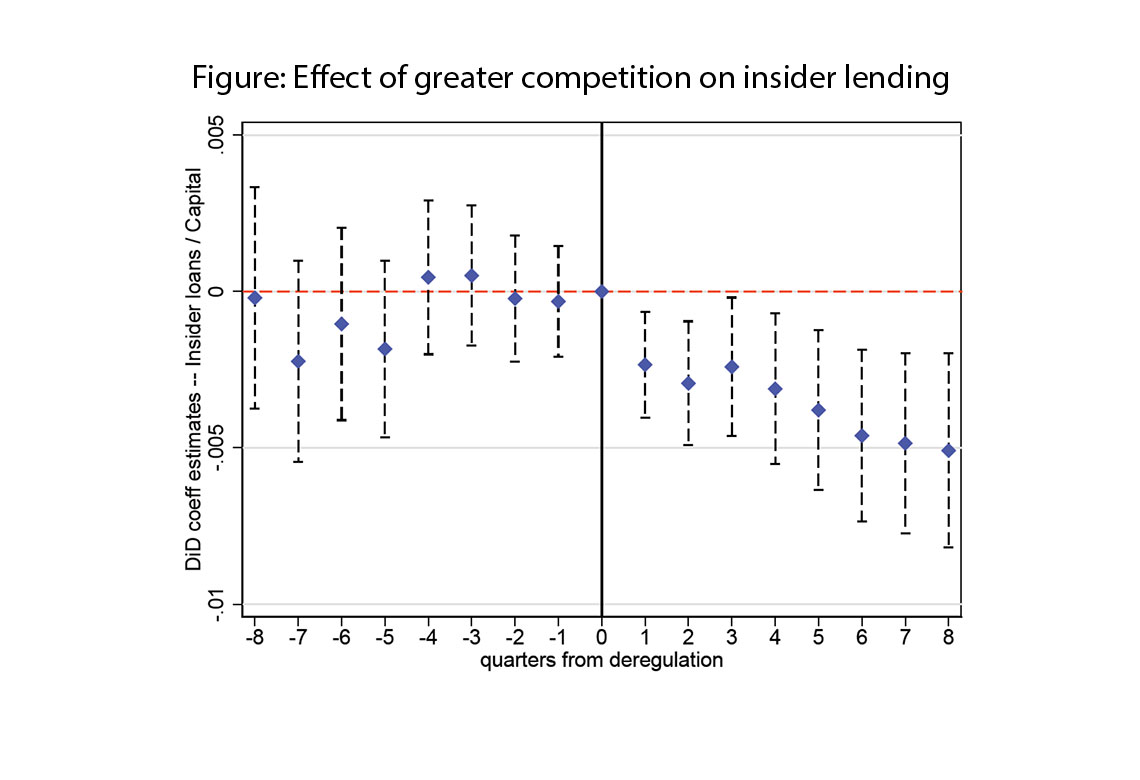 The separation of ownership and control within a corporation generates agency problems. In the banking industry, insiders' opportunistic behavior may be further exacerbated by the presence of deposit insurance, which reduces debtholders' incentives to monitor bank management. In this paper, we test whether competition can act as a spontaneous market force to reduce agency problems within banks.

We consider quarterly data on the universe of US commercial banks and thrifts from 1994Q2 to 2005Q2. Our proxy for the agency conflict within a bank, and, specifically, for the private benefits extracted by bank insiders, is the volume of loans that the bank lends to its executive officers, directors, principal shareholders, and their related interests (e.g., a company controlled by a director).

Our analysis starts by evaluating whether these loans are private benefits related to agency problems. We show that the volume of insider loans is larger in banks with high free cash flows and low growth opportunities: according to Jensen (1986), it is precisely in such institutions that insiders are more likely to extract private benefits. We also show that greater insider lending is associated with lower bank productivity and profitability. These results support the view that insider lending is a manifestation of self-dealing.

We then analyze the effect of competition on insider lending. We exploit the staggered relaxation of interstate branching restrictions: The Interstate Banking and Branching Efficiency Act (IBBEA) of 1994 favored the penetration of out-of-state banks in local banking markets and significantly increased the number of branches in each state. The relaxation of the constraints was, however, implemented at different points in time and with different intensity across states, enabling us to draw causal inferences.

In our baseline difference-in-differences approach, we compare the level of insider lending between commercial banks headquartered in different states, which are thus exposed to different degrees of local banking market contestability depending on whether and how the home state implemented the IBBEA, at the same point in time. The figure summarizes our findings. The blue dots describe the evolution of insider lending depending on the time distance from the quarter in which the bank’s home state deregulates (i.e., passes at least one of the provisions in line with the IBBEA for the first time). The figure also reports 95% confidence intervals. It appears very clearly that a significant decrease in the lending to insiders starts exactly after the bank's home state deregulates, and that the reduction amplifies the more time passes from deregulation. Overall, our estimations indicate that following full deregulation, the average bank decreases insider lending by at least 3.2%.

We find confirmation that the mechanism underpinning our results hinges precisely on bank competition by checking that the reduction in insider lending is more pronounced for banks that are a priori more challenged by the entry of new competitors. Then, we corroborate our findings in multiple ways. We address potential endogeneity concerns from a variety of angles, and consider an instrumental variables approach. Also, we explore whether using alternative measures of agency conflict delivers similar results.

Overall, in this paper we provide the first empirical evidence on the effect of greater local banking market contestability on the consumption of private benefits by bank insiders. All our results confirm that greater competition enforces discipline on bank insiders.