We propose a new “global” market share indicator that complements the traditional export market share analysis by accounting for the foreign value added embodied in the production process and for the performance of national firms on their domestic market. We also consider all the income from activities used in the production to address the manufacturing final demand, namely all activities within the manufacturing value chain. Our results show that the role of services is growing in global value chains. Interestingly, considering our global indicator makes the dynamics of market shares converge among large economies, which can be explained by a de-correlation between national and export performances. This de-correlation appears to reflect greater specialization within global manufacturing value chains. 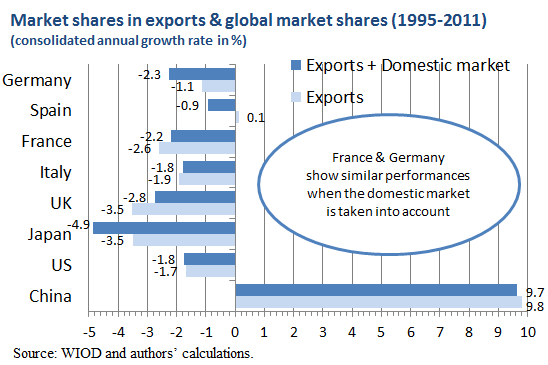 Export market shares indicators have become a yardstick for measuring competitiveness. Using gross trade flows does however not allow distinguishing whether exports contain substantial domestic value added or a large proportion of imported inputs. Also, they do not consider the performance of firms in their domestic market, facing import competition. The global market share indicator developed in this paper proposes an approach to overcome these two limitations. Furthermore, the paper focuses on countries’ pattern within the manufacturing global value chains, and considers all the incomes from activities used in the production to address the manufacturing final demand, including services.

The import content of exports increased over the last two decades following the development of global value chains. The paper shows that despite this trend, export market shares computed from value added trade flows do not substantially affect the basic diagnosis based on gross trade flows. Interestingly, the analysis of all the tasks performed within the manufacturing global value chain gives a rather mixed diagnosis.

Taking into account all the contributions of services sectors to the manufacturing production reduces the international divergence in the dynamics of market shares indicators, notably between European countries. This is especially due to the increasing specialization of advanced economies in these service sectors. Our results highlight the importance of considering all activities within GVC to better assess the international performance of advanced economies. In particular, the French services industries increasingly contribute to the manufacturing value chain; whereas Germany stands at the opposite end of the spectrum as this deformation toward service tasks is less pronounced.

The convergence in the dynamics of market shares of most European countries is even stronger when we consider the performance of national firms in their own domestic market; i.e. using the global market share indicator. Thus, as the dispersion of global performances tightens, our results suggest that there is no polarization of the manufacturing production within the European Union.

To better understand these trends, we decompose our indicator into four main components: the countries’ performance on exports and on their home markets; and the dynamics of foreign and domestic demands. The decomposition indicates a very low correlation between firms’ external and domestic performances. Among the European countries in our sample; Spain and Germany, the two advanced economies that best maintain their export market shares between 1995 and 2011, do not reproduce this performance on their home markets. In contrast, for France and Italy, the loss of market shares is less pronounced in their home market than in foreign markets. This de-correlation between export and domestic performances seems to reflect greater specialization of domestic production within the manufacturing global value chain while final demand remains diversified.