This paper analyzes the business cycle behavior of the corporate debt structure and its interaction with economic recovery. The debt structure is measured as the share of bonds in the total credit to non-financial corporations for a quarterly panel of countries over the period 1989-2013. We first show that the substitution of loans for bonds in recoveries is a regular property of business cycles. Secondly, we provide evidence that economies with high bond share and important bond-loan substitution recover from the recessions faster. This identified link between corporate debt structure and business cycles is robust to the inclusion of traditional factors which shape recessions and recovery such as the size and the quality of financial markets, the occurrence of bank crisis, the dynamics of credit, and the distribution of firm size. 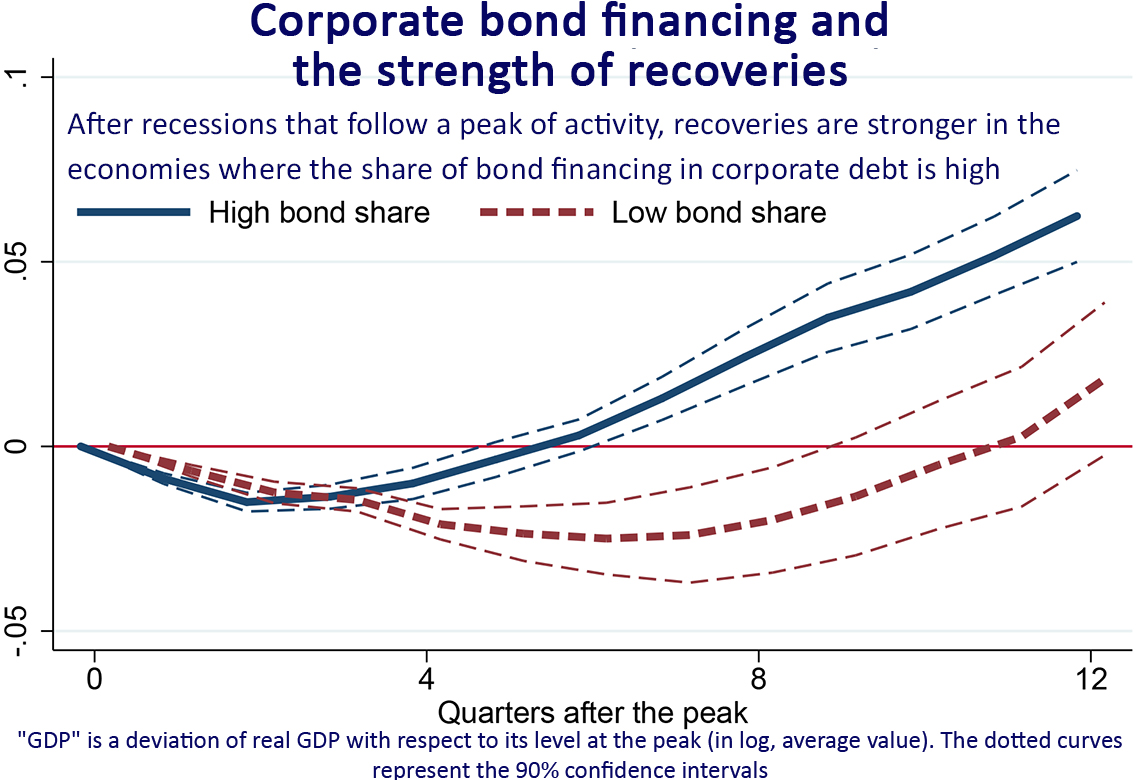 The total credit to the US nonfinancial corporations (NFC) declined during the Great Recession of 2008-2009 and the structure of corporate debt shifted from bank debt to market debt. This time-varying composition of corporate debt has been stressed by Adrian et al. (2012) and Becker and Ivashina (2014) as essential to understand the transmission of the financial crisis to the non-financial sector. Indeed, the issuance of market debt helped firms to mitigate the contraction in the supply of bank debt by troubled banks. However, besides the recent US experience, the macroeconomic evidence of the cyclical behavior of the corporate debt structure is relatively scarce.

This paper fills the gap by providing a cross-country study of the business cycle behavior of corporate debt structure.  First, we analyze the variations of the corporate debt structure around recessions and find that the firms substitute bank debt by market debt in recoveries. The substitution of bonds for loans reported by Adrian et al. (2012) for the United States after the Great Recession is robustly observed in other recoveries of our panel. Second, we investigate whether the access to corporate bond finance matters in the aftermath of recessions. To our best knowledge, this is the first evidence for a panel of countries that shows that the economies with higher share of corporate debt and large substitution from loans to bonds experience shorter and more vigorous recoveries (see the Figure above).

Our main measure of the corporate debt structure is the ratio of the amount of bonds issued by non-financial corporations to the total credit provided to them, referred to as the "bond share". Our quarterly panel for corporate debt structure covers twenty three advanced and emerging economies since 1989 for most countries. We identify the peaks of real GDP for each country and study the behavior of corporate debt around these peaks. We show that the loans and bonds follow a similar trend during the year before the peak, but diverge strongly during the recovery phase. The cumulative growth of bank loans over the two years following the peak is close to 1%, while the cumulative growth of bond debt amounts to 20%. The change in the structure of corporate debt occurs during the recovery phase, and leads to a total increase in the bond share of 15%.

The substitution of bond debt for bank loans that occurs during a recovery phase appears to reflect banks' difficulty in meeting companies’ demand for credit (see Becker and Ivashina, 2014). Access to bond markets as an alternative source of financing would increase investment and thus accelerate the recovery. We therefore investigate the existence of a link between the structure of corporate debt and the strength of the recovery in our panel of countries. The Figure above shows the change in real GDP after a typical peak of activity, depending on whether the initial value of the share of bond financing is high (above average, full line) or low (below average, dotted line). At the beginning of the recession, the trend is similar: in the first three quarters, the two curves are very close. Subsequently, the two curves diverge. The recovery starts earlier in the countries where the share of bond financing is high - on average three quarters after the peak, compared with six quarters in the economies with a low share of bond financing - then the gap widens. Economies where the share of bond financing is high return to pre-recession GDP levels five quarters after the peak, while economies with a low share of GDP only reach such levels eleven quarters after the peak. At this date, the real GDP of the economies where the share of bond financing is high exceeds its value by 5% at the height of the cycle. The positive relationship between the recovery dynamics and the level of the initial bond share exists irrespective of the nature (financial or non-financial) of the crisis. It is maintained when we exclude the United States and the 2008 recession from the sample. The debt structure also has a specific effect when we take into account the effect of firm size, the development of financial markets and the quality of institutions.

Our findings are relevant for the economic policy design especially in the Euro area where corporate debt markets are less developed. Diversification of firms’ external finance diminishes the risk of credit crunch in case of bank sector disturbances.