Working Paper Series no. 673: The Cost of Non-Europe, Revisited

Thierry Mayer, Vincent Vicard & Soledad Zignago quantify the cost of Non-Europe, i.e. the trade-related welfare losses that would occur under different scenarios of undoing the European Union. Thirty years after the terminology of Non-Europe was used to give estimates of the gains from further integration, authors use modern versions of the gravity model to quantify the trade creation implied by the EU, and apply those to counterfactual exercises where for instance the EU returns to a shallow-type free trade regional agreement, or reverts to WTO rules. Those scenarios are envisioned with or without the Brexit happening, which points to interesting cross-country differences and potential cascade effects in doing and undoing of trade agreements. 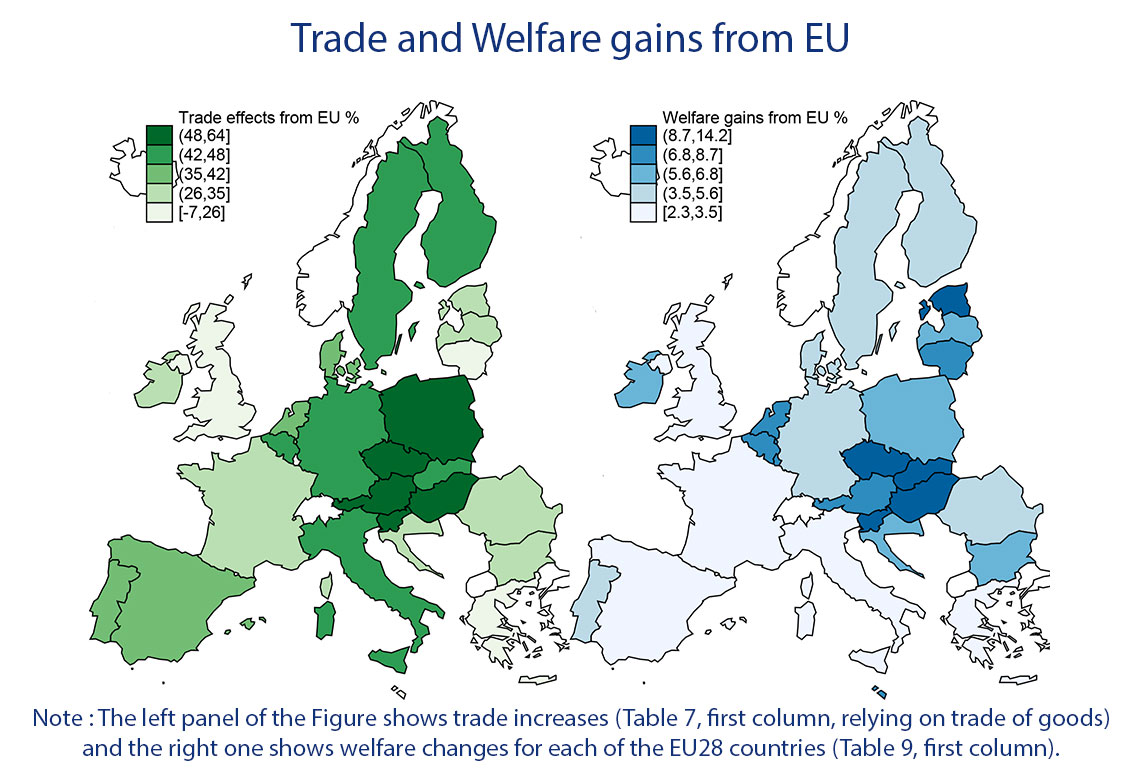 Nearly a quarter century after the implementation of the Single Market Program (SMP, started in 1987 and achieved in 1993), we live in an age where a possible scenario in the near future is one of single market fragmentation in Europe, reversing one of the deepest and most prolonged trade liberalization processes in modern history. The choice of the United Kingdom to exit the EU (Brexit) combines with the calls from many governments (even ones seen as moderate) for a reversal of key integration agreements like Schengen, to give a bleak picture of what may come next. This makes it a good time to revisit the gains the EU has reaped from trade integration since 1957 and what would be the costs of going backwards.
On the academic front is a happy coincidence that the techniques available to estimate those gains and costs have come to maturity recently, enabling a relatively easy quantification of different scenarios which might characterize the near future of the continent. In particular, Costinot and Rodriguez-Clare (2014) show that the most popular models that trade economists have been developing and using since the late 1970s (a large class of models featuring important diversity in assumptions regarding demand systems and market structure) have two very convenient properties for the purpose of quantifying gains from trade: i) trade frictions are estimable in a simple way using the “structural” version of the gravity equation; ii) endowed with those frictions, it is easy to run counterfactuals (using an approach often referred to as Exact Hat Algebra that imposes minimal data requirement).
This paper can be seen as a re-assessment of the cost of non-Europe. The first assessment was one carried on in 1988, in an official European Commission report estimating the likely ex-ante gains that would come from the achievement of the SMP. Our paper is an ex-post exercise quantifying what would be the costs of undoing what has been achieved over all those years in terms of European integration. We propose various scenarios of EU disintegration, ranging from the return to a standard free trade agreement to the return to WTO rules under which each former EU country would apply the current MFN (Most Favoured Nation) tariffs to its former EU partners. Another contribution is that we ground our simulations with our own estimates of the direct trade effects of the EU using the latest available data and techniques of structural gravity estimation. Finally, we investigate how Brexit affects gains from EU integration of remaining members.
Our results show that the EU provides for deep trade integration over and above tariffs cuts: we find a (partial) trade impact of the Single Market more than three times larger than a regular RTA. In our preferred simulation, the Single market is found to have increased trade between EU members by 109% on average for goods and 58% for tradable services. The associated welfare gains from EU trade integration are estimated to 4.4% for the average European country (weighted by the size of the economy). Not all countries have benefited to the same extent however. In order to graphically illustrate the distribution of those gains, Figure 1 shows two maps. The map on the left of the Figure shows trade (of goods) increases and the one on the right shows welfare changes for each of the EU28 countries. Welfare gains from trade are significantly larger for small open economies than large EU members (right side of the Figure). Interestingly, OLS and PPML gravity estimates of the EU trade impact differ; (as differences in trade elasticities or differences in ad valorem equivalent of trade costs, the gains from EU integration are magnified or dampened compared to the standard OLS case).
Several qualifications are in order regarding the scope of our analysis. We estimate the economic gains from European integration through the trade channel. We are therefore silent about other dimensions of European integration, such as the free mobility of capital and labor, or non-economic gains. Also, by the supranational nature of the EU, member countries may benefit from a more efficient provision of public goods (e.g. external trade policy, competition policy, monetary policy...) as well as incur costs related to the heterogeneity of preferences between members. In addition, our framework does not feature dynamic gains from trade, which have ambiguous effects in the literature.