This paper studies the impact of uncertainty on cross-border investments. We build a data-set of firm-level outward Foreign Direct Investments between 2000 and 2015. We create a time and country varying measure of uncertainty based on the dispersion of idiosyncratic investment returns. An increase in uncertainty delays cross-border flows to the affected country. Yet, this average e_ect hides strong heterogeneity. Firms with low ex-ante performance durably reduce their foreign investments. Meanwhile high-performing firms increase their investments after the initial shock. We interpret these results as the evidence of a cleansing effect of uncertainty shocks among multinational firms in the presence of financial frictions. 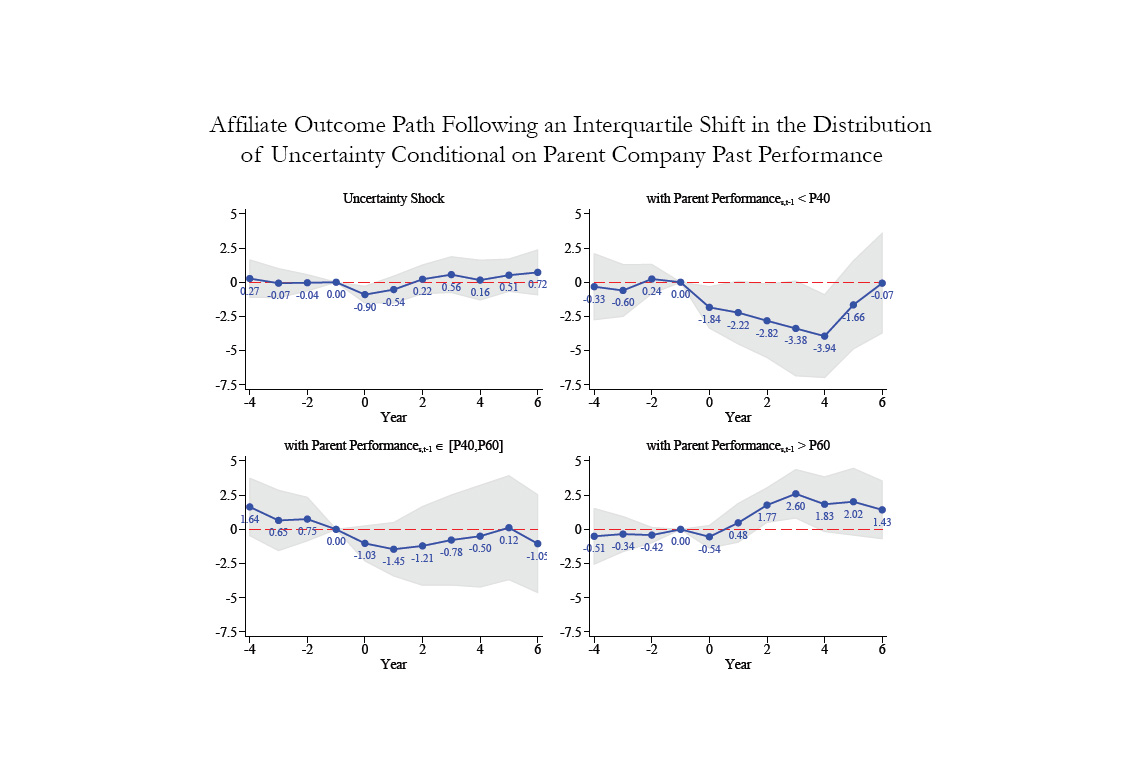 Foreign investors fear uncertainty. This widespread view is repeatedly invoked in the media and political circles during turbulent times as in the current context of Brexit and trade wars. In this paper, we build a measure of uncertainty based on FDI returns of French Multinational Firms (MNF or firms hereafter) to document how FDI react to a rise in uncertainty in the host country. A striking result is the great heterogeneity of the effect of uncertainty on FDI decision. A slightly negative and short-lived average effect hides a strong negative and persistent effect for low-performing MNF which turns out to be positive for high-performing ones. Therefore, besides its moderate effects on average, uncertainty appears as a key driver of reallocation of FDI between MNF.
The starting point is to build a microdata based measure of uncertainty for FDI returns. While investigations on the impact of uncertainty on FDI in the literature rely upon global measures of uncertainty as the electoral cycle, the stock market volatility or the exchange rate uncertainty; we investigate herein a measure of uncertainty which is specific to FDI. To get as accurate measure of exogenous uncertainty, we consider the dispersion of FDI returns which are not predicted by relevant factors (Anderson et al. (2009), Boutchkova et al. (2012), Bloom (2014) and Bloom et al. (2018)). More precisely, our uncertainty measure is the standard deviation of the component of FDI returns that is unexplained by its lagged value, the indexes of world and country FDI returns, and an estimated structure of fixed effects.
The highest uncertainty is observed in 2008 in Thailand, a year marked by a very serious political crisis. We also observe high values during the Great Recession for several emerging countries (South Africa, India and Romania) and the famous 2001 financial crises in Argentina and Turkey, as well as in Russia (in 2002 and 2006, a year of tensions with Ukraine and international sanctions). Our measurement is therefore a synthetic indicator of the several dimensions of uncertainty (economic, political and financial).
We then estimate how FDI react to uncertainty by regressing the individual FDI outflows by French MNF on our measure of uncertainty. We supplement our results with the Local Projection method of Jordà (2005) to assess the persistence of the adverse effect of uncertainty on FDI. Following a one interquartile range increase in uncertainty in one country, French MNF decrease the rate of their direct investments to this affected country by as much as 0:904 points of percentage. Using split sample analysis, we show that this figure hides a strong heterogeneity. Parent companies with low ex-ante performance bear the brunt of the losses from uncertainty and do not experience any recovery in the following years; contrary to parent companies with high ex-ante performance. Indeed, the fall of 0.904 points of percentage of FDI growth on average is associated with a gap of 5.98 points of percentage three years after between parent companies with the highest and the lowest ex-ante performance. In fact, the rise in uncertainty has a positive effect for high-performing parent companies (2.60 ppt) while low-performing firms experienced a dramatic fall in FDI (-3.38 ppt). The small and short-living average effect hides strong and persistent heterogeneous effects of uncertainty on FDI.
Our results contribute to the large literature on the relation between FDI and uncertainty, confirming the importance of the effect of uncertainty not only on the aggregate level of FDI flows but also on the composition of the MNF at the origin of those flows. Our results contribute also to literature on the heterogeneous effects of uncertainty shocks. Our contribution is to extend the set of results that highlight the importance of heterogeneity in trade flows to FDI flows; and to identify the role of firms returns as a key source of heterogeneous responses of MNF to uncertainty. Finally, it is worth emphasizing that heterogeneity concerns the sign of the impact and not only its magnitude: the impact of uncertainty is positive for high performing firms. Such effect has also been identified in the literature mainly by showing that investment lags in somes spécific sectors - such as R&D, oil and gas or mining - reverse the standard result of the literature on adverse effects of uncertainty on investment. FDI may thus share some features with these types of investment which would explain why they react positively with uncertainty for the most performing firms in our sample.