Working Paper Series no. 870: The Currency Channel of the Global Bank Leverage Cycle 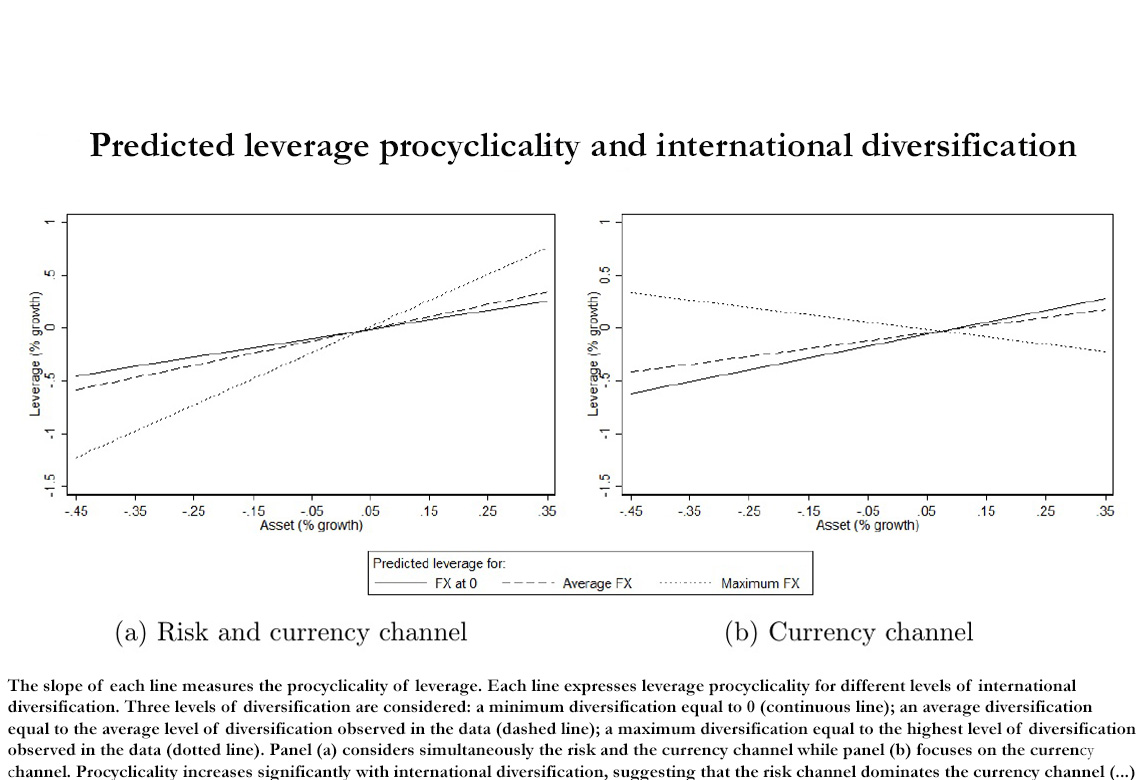 According to Adrian and Shin (2010, 2014), the amplitude of leverage procyclicality is heterogeneous across banks and across countries. This paper introduces international diversification of bank balance sheet as a factor of this observed heterogeneity, with a special emphasis on currency diversification. It first develops a contract model between the bank and its creditor with international assets and liabilities. It provides micro-foundations for a Value-at-Risk (VaR) rule where the probability of default of the bank – defined through the global portfolio return distribution – is constant over all states of the nature. To satisfy this rule, the bank and its creditor set the level of payoff and debt according to the state of nature. Assuming that the state of nature is reflected in the distribution of the portfolio return via a location parameter (i.e. the better the state of nature, the higher the location and the mean of the distribution), payoff, debt and leverage adjust to changes in this parameter and the associated risk environment. It provides a new theoretical framework to decompose the impact of diversification on bank leverage adjustments according to two channels, i.e. the risk channel and the currency channel.

In this paper, the distribution of the global portfolio return consists of a mixture of distributions between a domestic asset and a foreign asset in foreign currency. Because the location parameter of each distribution is a proxy of the state of nature of its related economy, changes in the states of nature affect the location of the global portfolio return distribution, as well as its tail risk. This direct effect is called the risk channel of diversification. The higher (lower) the risk introduced by diversification, the lower (higher) the leverage to satisfy the VaR rule. It follows that the risk channel accentuates leverage procyclicality when the foreign economic condition is more volatile than the domestic one, that is when it outperforms the domestic economic condition during booms but falls behind it during busts. The currency channel comes from the valuation effect on assets denominated in foreign currency. It affects the relative weight of each asset in the global portfolio. Foreign exchange rate is defined such that the currency with the higher interest rate (i.e. state of nature) typically appreciates. Therefore, the currency channel always promotes the asset that offers a better return in the portfolio. It directly changes the shape of the global portfolio return distribution by reducing its tail risk. It follows that leverage procyclicality – which refers to the cyclical variations of leverage according to the financial cycle – depends on the relative performance of economies, the global business cycle and the exchange rate regime.

Finally, the paper points out that international diversification is relevant to the procyclicality of leverage, even if banks use hedging strategies, such as financial instruments related to foreign currency exposure or a perfect match between foreign currency assets and liabilities. Considering home bias behaviour, the model is consistent with this hypothesis. However, currency diversification captures additional information. Assuming that bank behaviour is driven by the home bias hypothesis, all results would be driven by bank exposure to non-residents and currency diversification would have no explanatory power.