We study the debt-stabilizing properties of indexing debt to GDP using a consumption-based macro-finance model. Three results stand out. First, GDP-linked bond prices would embed sizeable and timevarying risk premiums of about 40 basis points. Second, for a fixed budget surplus, issuing GDP-linked securities does not necessarily imply more beneficial debt-to-GDP ratios in the medium- to long-run. Third, the debt-stabilizing budget surplus is more predictable under such issuances at the expense of being higher on average. Our findings call into question the view that GDP-linked securities tame debt. 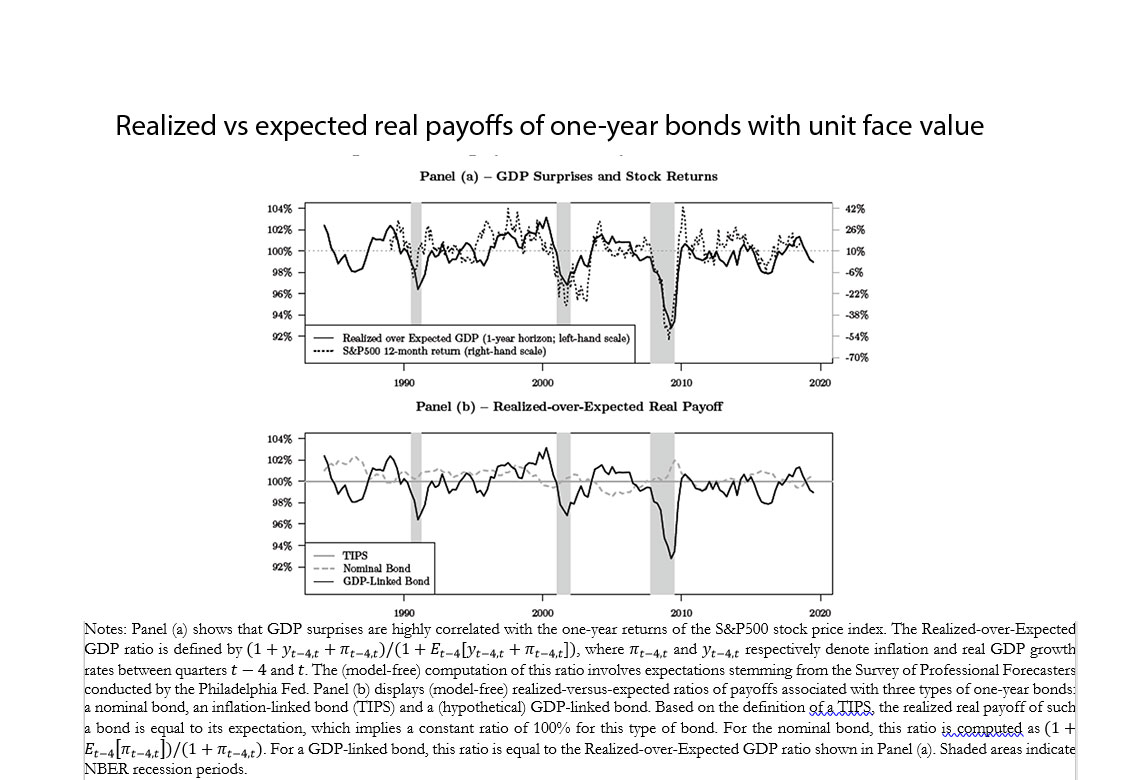 With the Great Recession, general government debt-to-GDP ratios in advanced economies increased considerably, from 71% in 2007 to 103% in 2019. Such large debt-to-GDP ratios can be a source of vulnerabilities, which amplify macroeconomic and financial shocks and thus increase the likelihood of a decline in economic activity. Discussions in policy circles suggest that indexing debt to GDP would reduce the severity of such an event by providing the government with an automatic stabilizer to its finance. By issuing state-contingent debt instruments, the government’s burden of servicing its debt is higher in periods of strong economic growth, while payments are reduced in periods of economic downturn. In other words, if all of a country’s public debt were indexed to GDP, one would expect the public debt-to-GDP ratio to be hedged against unforeseen changes in nominal GDP growth. However, other drivers, beyond economic growth, are key in determining the debt-to-GDP ratio, such as the quantity of debt issued across time, the bond prices associated with these issuances and other debt-related variables. Do GDP-linked bonds remain a relevant tool for the stabilization of debt once accounting for a wider set of determinants?

In this paper, we address this question by extending the representation of the debt-to-GDP process to allow for the issuance of any type of bond (conventional or GDP-linked) with any maturity. This generalization features several drivers of the debt-to-GDP process and notably requires information on the price dynamics of GDP-linked bonds, which is not directly observable given no large developed economy has ever issued them. To this end, we estimate an asset-pricing model that exploits observed macroeconomic and financial data that are informative about the pricing of GDP-linked bonds. Notably, we take advantage of the natural relationship between equity and GDP-linked bonds. This relationship is reflected by a strong correlation between stock returns and GDP surprises, as illustrated in Panel (a) of Figure 1, where GDP surprises correspond to the unexpected part of (hypothetical) one-year GDP-linked bonds issued a year ago. Panel (b) of the same figure shows that the payoffs of conventional bonds are far less procyclical – and hence weakly correlated with stock returns – relative to GDP-linked bonds. Hence, to study the price dynamics of GDP-linked bonds, our model selection is driven by its ability to also capture the dynamics of stock returns. Specifically, we rely on the consumption-based model with habits à la Campbell and Cochrane (1999) and Wachter (2006) and extend it to include the term structure of hypothetical GDP-linked bond yields. This framework allows for time-varying investors’ preferences (through habit persistence) and countercyclical risk premiums to successfully capture the joint dynamics of macroeconomic (GDP, consumption, inflation) and financial (stock returns, nominal and real yields of different maturities) data.

Three results stand out from our analysis. First, GDP-linked bond prices would embed sizable and time-varying risk premiums, estimated at about 40 basis points along the maturity spectrum, as investors require an additional compensation for holding them. Second, for a fixed budget surplus, issuing GDP-linked bonds instead of conventional ones does not necessarily imply more beneficial debt-to-GDP ratios in the medium to long run. Third, the debt-stabilizing budget surplus is more predictable under GDP-linked bond issuances at the expense of being higher on average. Hence, our findings call into question the view that GDP-linked bonds tame debt.