Rue de la Banque no. 67: A DGSE model to assess the post-crisis regulation of universal banks

The 2007-08 financial crisis led to a global overhaul of prudential regulatory instruments. At an international level, the new Basel III regulation increased capital requirements and also introduced two liquidity ratios, for the short and long term. This Rue de la Banque provides our latest estimates of the new regulation’s long-term impact on bank lending and gross domestic product, which appears limited. It also highlights the complementarity that can arise between solvency and liquidity objectives, the degree of substitutability that can appear between the two new liquidity ratios, and the role of sovereign bonds in the new regulation.
By Olivier de Bandt, Mohammed Chahad 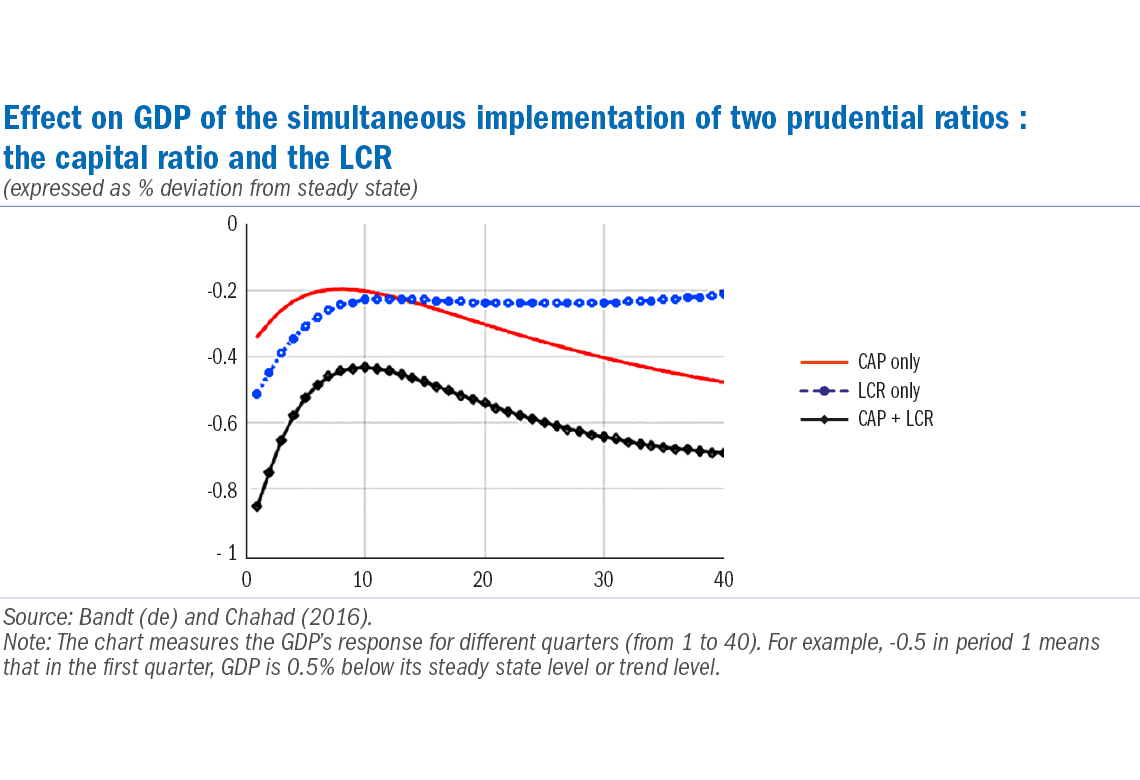 The new regulatory regime for banks was stabilised with the agreement on the finalisation of the Basel III reforms in December 2017. Overall, the prudential regulation of the banking sector has been radically restructured. Solvency requirements for individual banks have been enhanced. Supervision of market activities has been improved, with Basel 2.5 and Basel III and the fundamental review of the trading book. Capital requirements have been reinforced both in terms of quality and quantity: (i) the minimum Common Equity Tier 1 (CET1) ratio was raised from 2% to 4.5%; (ii) the minimum Tier 1 capital ratio was increased from 4% to 6%; and (iii) the minimum total capital ratio was unchanged at 8%, but further constraints were imposed on capital quality. In addition, dividend payments are restricted by an additional capital conservation buffer of 2.5%, comprised of CET1. Basel III was implemented in Europe on 1 January 2014 through the Capital Requirements Directive IV (CRD IV) legislative package. Furthermore, two liquidity ratios were introduced: (i) the liquidity coverage ratio (LCR) with a one-month time horizon; and (ii) the net stable funding ratio (NSFR) with a one-year time horizon. Although the definition of the LCR was approved in 2013 and transposed into European law in 2014, its implementation will only be finalised in 2019. As for the NSFR, transposition of the text published by the Basel Committee is still under discussion at the European level, based on a legislative proposal formulated by the European Commission in November 2016.

A further innovation of Basel III was the introduction of macroprudential capital buffers, which also result in stricter capital requirements at individual bank and bank group level.