We define a disastrous default as the default of a systemic entity. Such an event is expected to have a negative effect on the economy and to be contagious. Bringing macroeconomic structure to a no-arbitrage asset-pricing framework, we exploit prices of disaster-exposed assets (credit and equity derivatives) to extract information on the expected (i) influence of a disastrous default on consumption and (ii) probability of a financial meltdown. We find that the returns of disaster-exposed assets are consistent with a systemic default being followed by a 3% decrease in consumption. The recessionary influence of disastrous defaults implies that financial instruments whose payoffs are exposed to such credit events carry substantial risk premiums. We also produce systemic risk indicators based on the probability of observing a certain number of systemic defaults or a sharp drop of consumption. 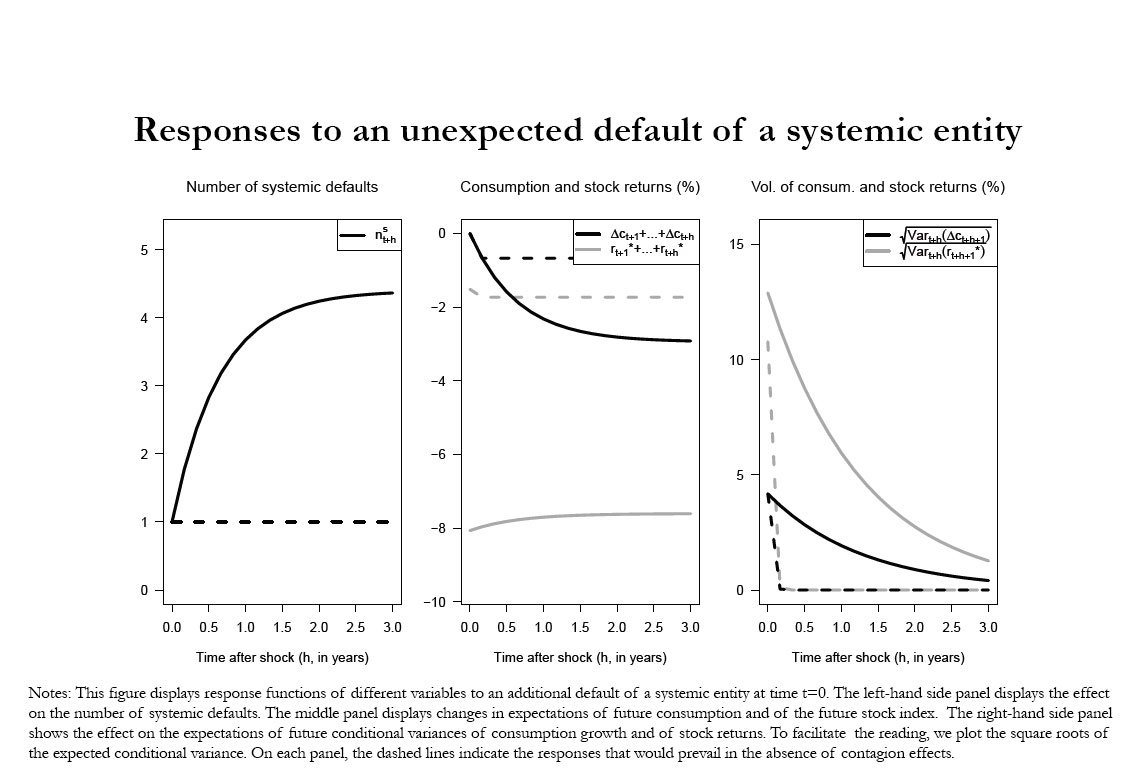 Recent events suggest that the default of a systemic entity per se may very well constitute a disaster in itself. Indeed, since its inception, the largest drop in the University of Michigan Consumer Sentiment index took place in September 2008, the month when Lehman Brothers went bankrupt. Similarly, the existence of systemic entities is at the core of novel regulations on Systemically Important Financial Institutions.

In this paper, we propose an asset-pricing framework where the default of some entities – called systemic – may have disastrous economic effects. In the model, the default of each systemic entity can affect consumption; moreover, such an event can be the source of default cascades. When they materialize, new defaults are likely to reinforce the initial drop in consumption and to contribute to further defaults. The model therefore accommodates amplification mechanisms. To our knowledge, the present study constitutes the first attempt to measure the macroeconomic influence of contagious corporate defaults. This information is extracted from the joint dynamics of consumption and of the prices of disaster-exposed market-instruments (i.e., tranches of synthetic collateralized debt obligations and far-out-of-the-money put options written on equity indexes). In this context, financial instruments that are exposed to the default of systemic entities are expected to command substantial risk premiums; the latter being defined as the component of prices that would not exist if agents’ were risk-neutral.

The empirical application, which is conducted on euro-area data spanning the period from January 2006 to September 2017, demonstrates the ability of our model to capture a substantial share of the joint fluctuations of consumption growth, stock returns and stock and credit derivatives, both in tranquil and stressed periods. Specifically, our estimation involves prices of derivatives written on (i) the EUROSTOXX50 index, one of the main benchmarks of European equity markets, and (ii) the credit portfolio underlying the iTraxx Europe main index, including synthetic CDOs of different maturities and seniority levels. Our estimation procedure assigns all 125 constituent entities of the iTraxx index – the most liquid European investment grade credits – as systemic. In the spirit of Backus et al. (2011), we deduce estimates of the influence of systemic defaults on consumption. Our results suggest that the default of a systemic entity is expected to be followed by a 3% decrease in consumption within two years, accounting for contagion effects.

We further exploit our estimated model to derive two systemic risk indicators. The first indicator is defined as the probability of observing a certain number of systemic defaults over specific horizons.  The resulting systemic indicator reaches its highest levels in late 2008, after the Lehman bankruptcy and in late 2011, when the European sovereign crisis was at its peak. On these two dates, the probabilities of having at least 10 iTraxx constituents defaulting within two years were of 7% and 6%, respectively. The second indicator is defined as the probability of consumption displaying a sharp drop in the next year. In line with the first indicator, these probabilities reached their maximum levels at the time of the Lehman bankruptcy and at the height of the European sovereign crisis. On these two dates, the probabilities of consumption dropping by more than 10% in the next year were of 6% and 5%, respectively.

Moreover, our findings point to the existence of substantial credit risk premiums in the credit derivatives written on systemic entities. In particular, the results suggest that about two thirds of 10-year Credit Default Swaps (CDSs) spreads written on systemic entities correspond to credit risk premiums. In other words, if agents were not risk-averse, these spreads would be three times lower. In line with previous studies, we find that an overwhelming share of the prices of the most senior tranches corresponds to risk premiums.