Working Paper Series no. 672: Dissecting the Impact of Imports from Low-Wage Countries on French Consumer Prices

Juan Carluccio, Erwan Gautier and Sophie Guilloux-Nefussi provide a quantitative assessment of the impact of imports from low-wage countries (LWCs) on CPI inflation in France during 1994-2014, using detailed micro data on imports and exports. The share of imports from low-wage countries in consumption increased from about 2% to 7%, and resulted in a negative impact on CPI inflation of about 0.17 pp per year on average. This effect decomposes in three channels. 1) The substitution channel, capturing the replacement of domestic production by goods from LWCs, accounts for almost -0.05 pp. 2) The rise in the proportion of LWC goods in total imports weighed down on imported inflation. This channel reduced French CPI inflation by 0.06 pp per year. 3) Instrumental variable estimation of the competition channel at the product level shows that the increase in the market share of LWCs in French expenditures led to a negative effect of 0.06 pp on CPI inflation. 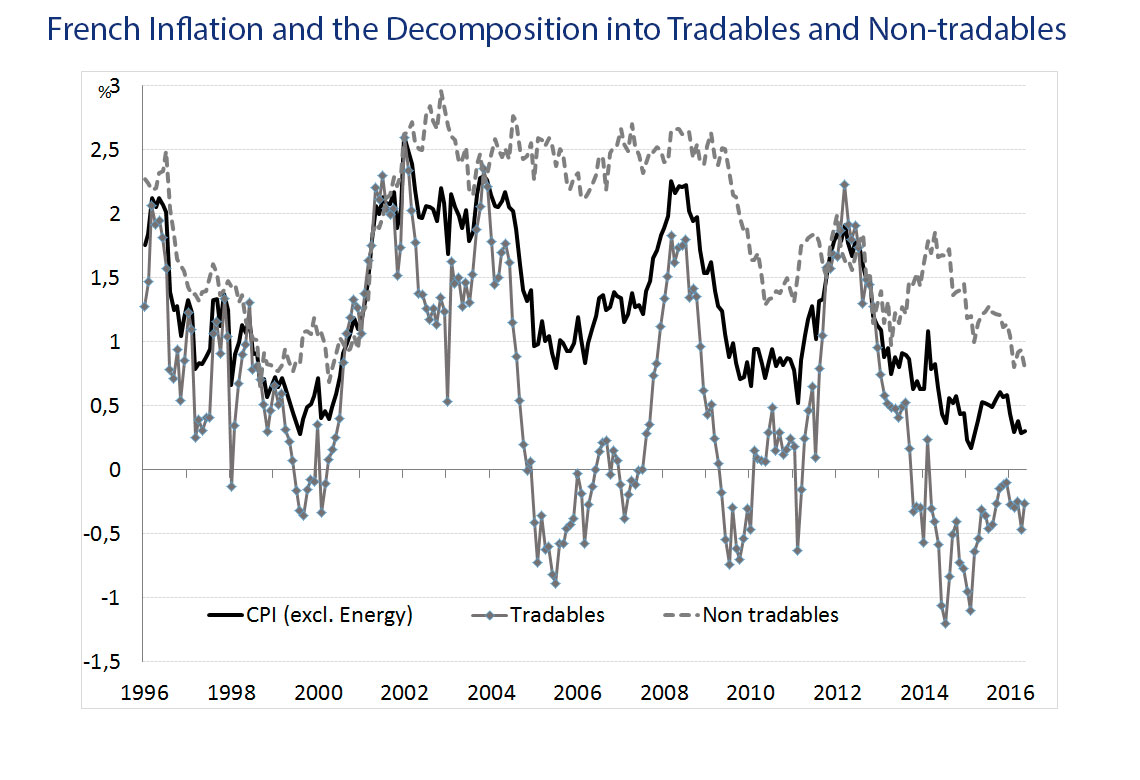 A salient feature of the current phase of the globalization process, which begun in the early 1990s, is the rapid and unprecedented integration of emerging economies in world trade. Theory predicts that this evolution should benefit households in developed countries through lowering consumer prices. Figure 1 depicts French CPI inflation and its decomposition into tradable and non-tradable goods inflation. Inflation in tradable goods has been consistently lower since the mid-1990s, corroborating the intuition that international trade openness might have weighed down on inflation over the last two decades.

In this paper we provide an assessment of the effect of imports from low-wage countries on inflation in France from 1994 to 2014, quantifying different channels through which the effect operated. We estimate that the share of imports from low-wage countries in French consumption tripled during the period, from 2.4% in 1994 to 6.9% in 2014. The main result of our analysis is that, had this share remained at its 1994 level, French inflation would have been 0.17 pp higher per year on average. For comparison, French CPI inflation (excluding energy) was 1.3% on average over that period, and inflation in manufactured goods was 0.7%. The single most important country in accounting for these effects is China. The share of Chinese goods in French consumption grew from 0.7% to 3.5% over the sample period, a five-fold increase. We find that imports from China alone contributed to reducing French inflation by 0.10 pp on average, accounting for a little more than half of the overall effect.

We use quasi-exhaustive firm-level data from the French Customs with information on quantities and values of imports by product and origin-country, from which we construct detailed import price indices. We create a concordance table to assign each of the imported products to a consumption category in the French CPI. Importantly, these data allow us to document the evolution of the share of imports in French consumption by origin country, and to asses by how much those changes have contributed to the dynamics of consumer prices. The use of detailed product-level prices (by country of origin) is key as it allows obtaining measures of differences in price levels, which are essential to our exercise.

We decompose the overall effect into three additive channels. First, imports from low-cost countries replaced goods that were previously produced domestically, with the corresponding shift in the consumption basket resulting in lower overall prices. Our estimations suggest that this Substitution Channel reduced French CPI inflation by 0.05 pp per year on average, accounting for about one third of the overall effect.

A second channel, labeled the Imported Inflation Channel, transits via the evolution of import prices: the rate of growth of imported good prices affects the CPI proportionally to the share of these goods in total consumption. We decompose the evolution of the import price index according to the imports' origins. We find that the increasing share of LWCs in total French imports of consumption goods depressed import price inflation by around 0.4 pp per year. This in turn reduced French CPI inflation by 0.06 pp per year on average.

Finally, raising LWC imports affect the price-setting behavior of domestic firms, thus impacting CPI inflation indirectly, which we label the Competition Channel. Fiercer import competition can negatively impact prices. We find an elasticity of producer prices to LWC import penetration of about -1. Given the share of imports in total consumption and the increase in imports from LWCs over the period, this third channel accounts for a reduction of CPI inflation by 0.06 pp per year on average.

It is worth noting that our estimations do not take into account indirect general equilibrium effects that might take place in the long run (such as price adjustments in tradables resulting from an income effect, or changes in labor and wages). Estimation of general equilibrium effects would require a structural macro model, which is left for future research. This work focuses on quantifying the direct effect on consumer prices.