Working Paper Series no. 762: Does the Liquidity Trap Exist?

The liquidity trap is synonymous with ineffective monetary policy. The common wisdom is that, as the short-term interest rate nears its effective lower bound, monetary policy cannot do much to stimulate the economy. However, central banks have resorted to alternative instruments, such as QE, credit easing and forward guidance. Using state-of-the-art estimates of the effects of monetary policy, we show that monetary easing stimulates output and inﬂation, also during the period when short-term interest rates are near their lower bound. These results are consistent across the United States, the euro area and Japan. 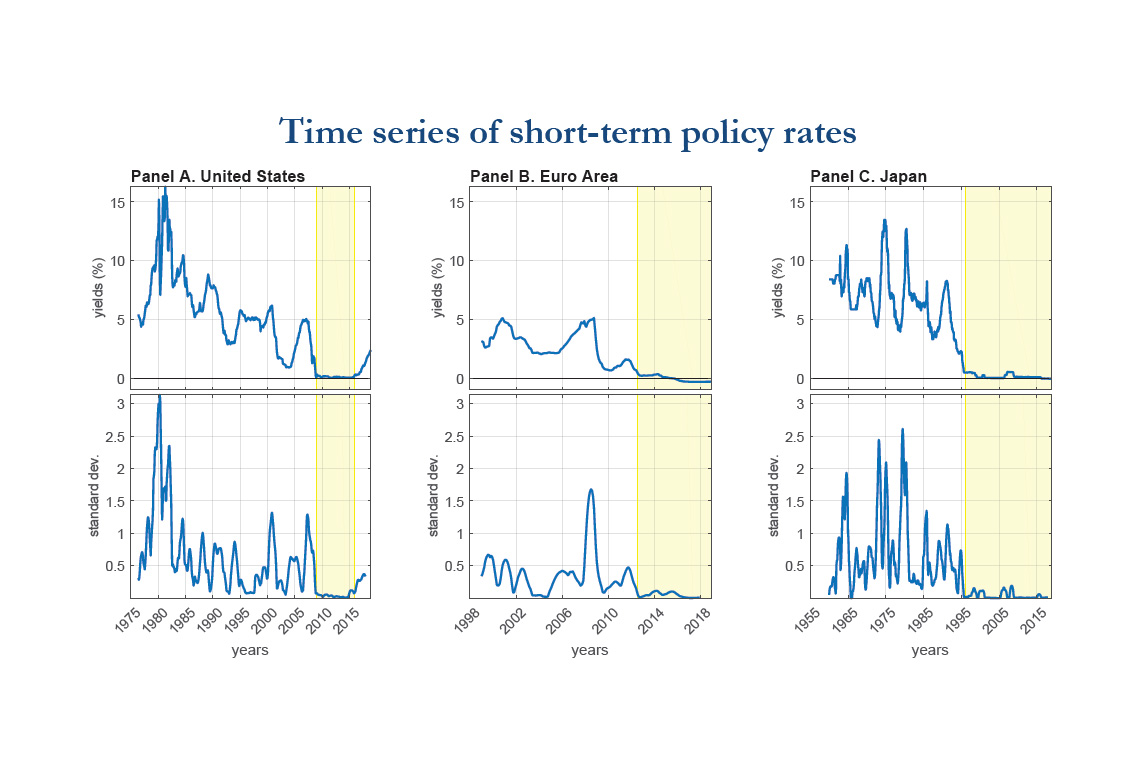 In this article, we compare the effects of monetary policy shocks in situations where the short-term interest rate is near its effective lower bound (ELB) with their effects when this is not the case, using a Bayesian structural vector autoregression (SVAR) framework. We deﬁne “ELB times” as periods when both the level and the standard deviation of short-term interest rates are close to zero. The level of the nominal short-term interest rate may even be negative, as has been the case in the euro area, Japan and several other countries. The ELB times extend from January 2009 to December 2015 for the United States economy, since July 2012 for the euro area and since January 1996 for Japan. Estimates of the effect of monetary policy shocks are compared with their estimates in periods when short-term interest rates can “normally” ﬂuctuate in positive territory. We call these later times the “normal times.”

Monetary policy shocks are identiﬁed through a combination of standard sign and zero restrictions on the impulse response functions and restrictions on the systematic component of the monetary policy equation following Arias, Caldara, and Rubio-Ramírez (2019). Our models include industrial production, the CPI, a short-term interest rate, a monetary aggregate and a measure of ﬁnancial market sentiment (corporate credit spread for the euro area and the United States and stock prices for Japan) at monthly frequency. To simplify our analysis as much as possible, for each country we will split our sample into ELB and normal times and run two different SVARs. Our main result is that monetary policy shocks have remained effective during ELB times. The result is robust across countries. We ﬁnd that the signs of the IRFs of the model’s variables to a monetary policy shock do not change when the economy moves from normal to ELB times. We also ﬁnd that the contribution of monetary policy shocks to unexpected movements of output and prices is still relevant during ELB times. For the United States, the contribution of MP shocks to the variance of output is even more important during the periods when the movements of the short-term rate were restricted by the ELB. That is not the case for the other two economies. The analysis of the effects of monetary policy when rates are low is important because interest rates may remain at or near the ELB in the decade ahead of us. As we write this paper, the Fed has reduced its interest rate by 75 basis points from the 2018 peak in the interest rate cycle. Neither the ECB nor the Bank of Japan (BoJ) are likely to lift the short-term rate into positive territory for several quarters. It is therefore necessary to measure the effect of monetary policy shocks when rates are near the ELB.

In many DSGE models used for the analysis of monetary policy, the ELB prevents the economy from adjusting. The logic of the argument is straightforward. If the reaction function of the central bank is the main stabilization mechanism of the economy and a sequence of negative demand shocks brings interest rates to their lower bound, the economy loses its main adjustment mechanism and it may diverge into a deﬂation spiral (see Krugman, 1998; Eggertsson and Woodford, 2003; Adam and Billi, 2006, 2007).

But this argument takes models with rational expectations a bit too literally. In the real world, monetary policy can still affect output and prices when the policy rate is at the ELB since several other rates can still adjust up or down. In particular, the central bank can lift asset prices. The set of measures focused on affecting asset prices have been labelled as unconventional monetary policies. Although the yields on these bonds are tied to the short-term rate of the central bank via arbitrage, they also depend on expectations for future short-term rates, term-, liquidity- and credit risk-premia, all of which can be inﬂuenced by the central bank’s asset purchases, lending policy, and commitment to future short-term rates. Hence, monetary policy shocks may spur output and inﬂation during ELB times. They would be expected to do so if unconventional monetary policies work effectively. Our results show that these policies have stimulated economic activity and inﬂation during ELB times. We show that a short-term rate stuck near zero does not prevent a central bank from spurring credit growth if it seeks to do so.