Working Paper Series no. 806: The Dynamic Effects of the ECB’s Asset Purchases: a Survey-Based Identification

This paper estimates the dynamic effects of the ECB's asset purchase programme (APP) using a proxy structural vector autoregression. We construct a novel proxy for structural APP shocks as unexpected changes in the size of additional purchases announced by the ECB. Unexpected changes are inferred from public expectations released in quantitative surveys just before monetary policy announcements. The results consistently show that innovations to APP have expansionary effects on both output and prices: an immediate increase in asset purchases of one percent of GDP leads to a maximum impact in industrial production and consumer prices by 0.15 percent and 0.06 percent, respectively. Overall, APP shocks account for less than a fifth of the long-run macroeconomic variability. Finally, our counterfactual analyses indicate that APP and its successive recalibrations were central in supporting inflation. For example, we find inflation would have fallen into negative territory without December 2015 and March 2016 APP recalibrations. 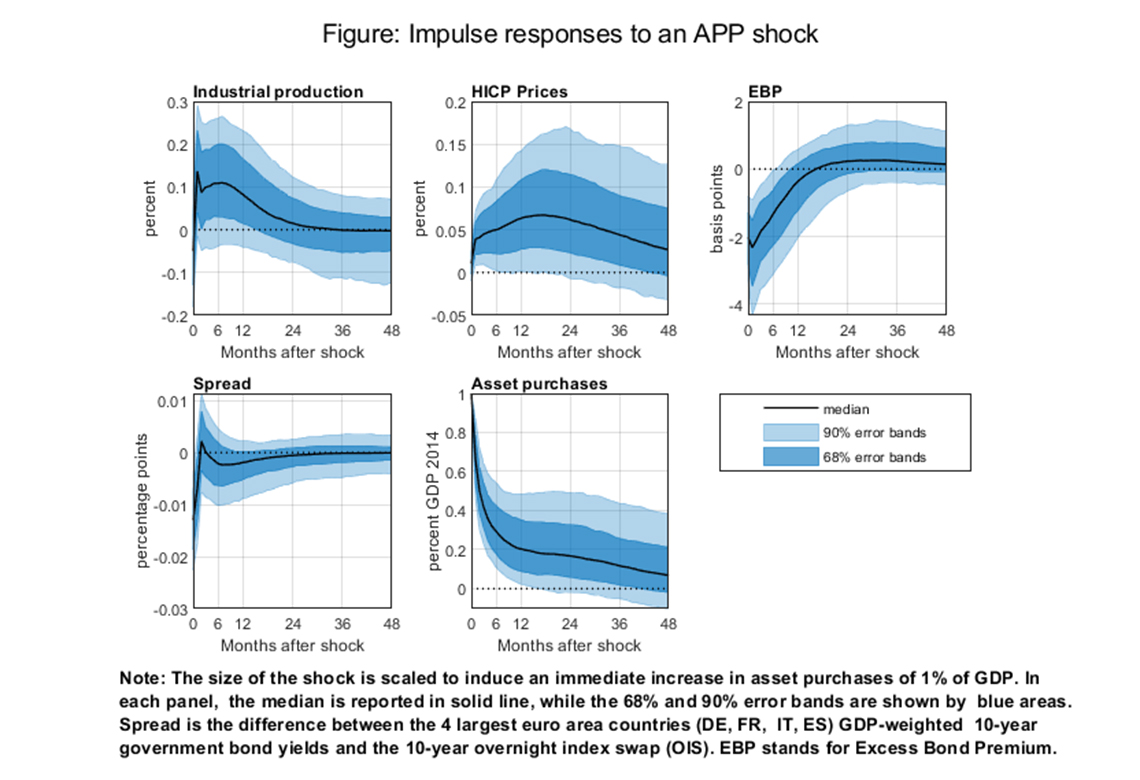 Quantitative easing has been since 2008 a major unconventional monetary policy tool in a context of policy rates near the effective lower bound. In the euro area, the European Central Bank (ECB)  launched its extended Asset Purchase Programme (APP) in January 2015, to address the mounting risks of a prolonged period of low inflation. The APP has been the main factor driving the expansion of the balance sheet of the ECB. In February 2020, the amount of securities held for monetary policy purposes by the ECB accounted for about Eur 2,700 billion -- approximately 25% of the euro area nominal GDP.

While a large literature has studied the financial market responses to asset purchases, relatively less work has assessed the response of aggregate measures of economic activity and prices, the ultimate variables of interest to the policymakers. Measuring these macroeconomic effects is challenging for at least two reasons. One is the likelihood of endogenous movements in policy variables: decisions to increase asset purchases can be responses to asset prices, inflation or other macroeconomic variables. As such, disentangling the effects of APP policy changes from the effects of non-policy factors remains inherently difficult. The second difficulty in making inference is that the ECB announcements of purchases have been partly anticipated by the public. As a result, the APP announcements are likely to be already -- even partially -- priced-in. Ensuring that the public's expectations are properly taken into account is therefore crucial to isolate changes in APP that are strictly unanticipated to assess their dynamic effects on aggregate activity.

To address these difficulties, in this paper we propose a structural vector auto-regression (SVAR) framework in which structural APP shocks are identified with an external instrument. In this class of models, commonly known as a Proxy-SVAR, the endogeneity problem is addressed by making the key assumption that the instrument is correlated with APP shocks but orthogonal to other structural shocks.

To identify APP shocks, we propose a novel instrument that relies on information released in quantitative surveys conducted with market participants by Bloomberg and Reuters ahead of each ECB Governing Council. Since late 2014, these surveys include questions over market participants' expectations on the future course of APP, and especially on the amount of additional asset purchases (if any) announced by the upcoming Governing Council.

We compute a surprise measure that serves as a proxy within a Proxy-SVAR framework to trace out the dynamic macroeconomic effects of APP. In our baseline specification, we find that APP policy has expansionary and relatively rapid effects on economic activity and prices. Specifically, we find out that an immediate increase in asset purchases of one percent of GDP leads to a maximum impact in industrial production and consumer prices by 0.15 percent and 0.06 percent, respectively.

We then run a number of counterfactual exercises. We ask what would have happened if ECB had not announced and implemented major APP recalibrations. Our simulations show that each major phase of recalibration has been successful in boosting both output and prices and instrumental in preventing inflation to fall into negative territory.