By Ninlias Elodie, Torre Ghjuvanni
Thematic: Means of payment and currency in circulation

The demand for banknotes and coins in the euro area remains robust despite changes in consumption patterns and the development of new payment instruments that contribute to a reduction in cash use. Consequently, the total value of euro banknotes and coins in circulation worldwide increased by 4% year-on-year.

In 2017, the Banque de France produced 1.1 billion banknotes on behalf of the Eurosystem. Coins are minted by the Monnaie de Paris and production in 2017 amounted to 710.8 million units.

Through its network of cash centres, the Banque de France maintains the quality of banknotes and makes them available to the public via cash industry professionals, particularly cash-in-transit companies (CITs). It is also responsible for putting euro coins into circulation and withdrawing them on behalf of the French state. In 2017, CITs withdrew 6.4 billion banknotes and 1.5 billion coins from the counters of the Banque de France and the Institut d’émission des départements d’outre-mer (IEDOM – the French overseas departments’ note-issuing bank). 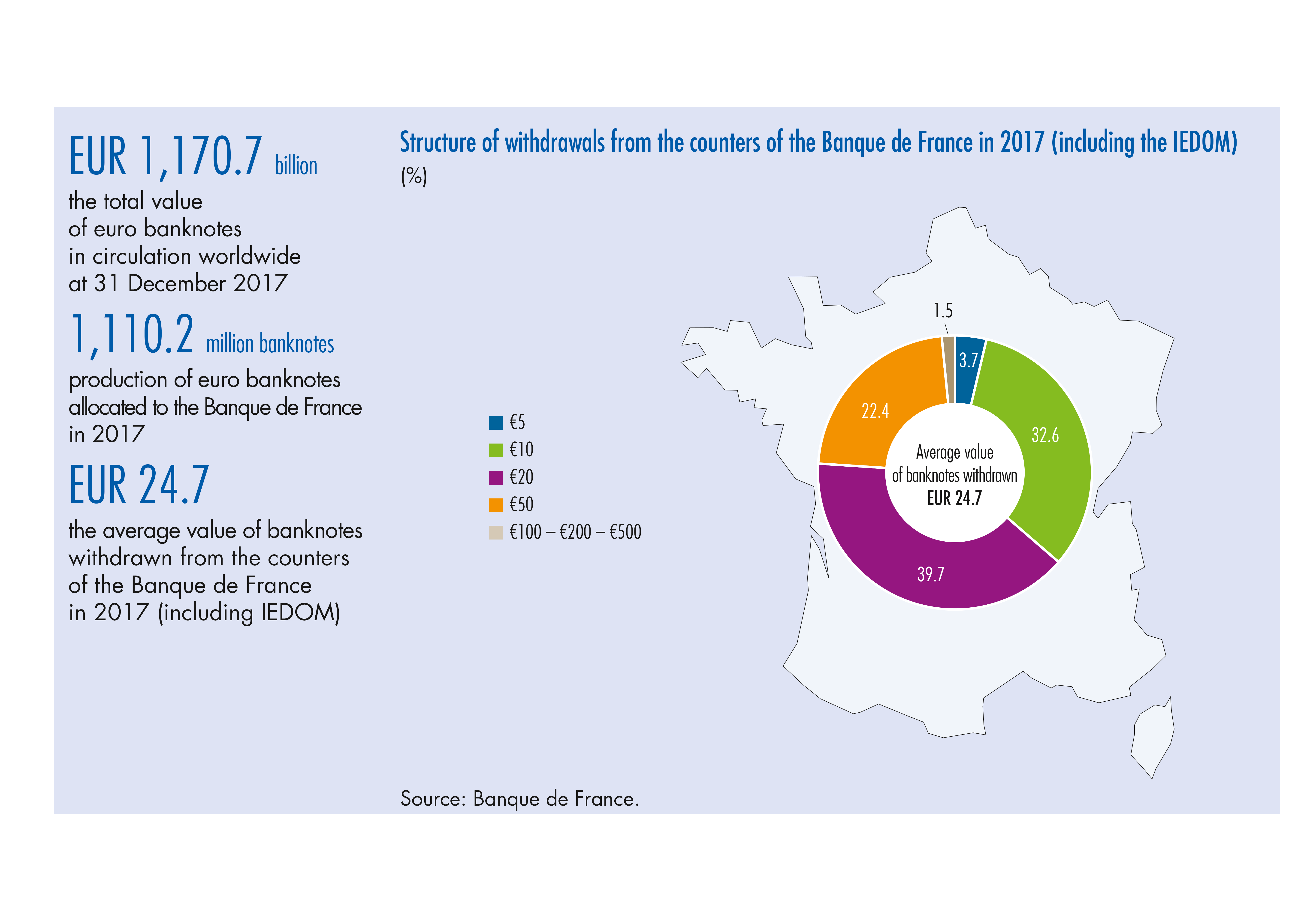 1 An apparent paradox: robust demand for euro banknotes and coins and an expansion of cash alternatives

These values correspond to all euro banknotes and coins issued by the central banks, including those held outside the euro area.

The value of banknotes and coins in circulation in French national territory cannot be measured because of their migration between countries. For example, a banknote (or coin) withdrawn in France can be used in other Member States, or even exported outside the euro area where it can be kept as a store of value or used as a means of payment. Equally, a banknote (or coin) held by an individual in France could have been withdrawn in another Eurosystem country. As a result, the difference between the banknotes (or coins) issued and those withdrawn from circulation by the Banque de France since 2002, does not correspond to circulation at the national level. This difference is instead reflected in domestic net issuance.

At the end of 2017, French net issuance of banknotes amounted to EUR 129.0 billion, up 7.6% year-on-year, while net issuance of coins in France was up 4.4% year-on-year to EUR 3.5 billion.1 The growth in net French issuance reflects the demand from both French residents and non-residents (tourists, for example) for banknotes from the Banque de France.

This robust demand for banknotes in France may seem paradoxical given the changes in payment and consumption habits, with cash payments facing ever-greater competition from the growth of online shopping and the continued expansion of cashless means of payment. For example, card payments have increased by 67% over the past 10 years,2 compared with a 17% growth in household consumer spending.3 Contactless payments have taken off over the past two years in France, providing an alternative to cash in its primary segment: low-value face-to-face transactions. The decline in the use of cash as a means of payment is also borne out by the reduction in the volume of banknotes passed from the public to professional cash handlers such as credit institutions, cash-in-transit companies and the Banque de France, which is down by 9.9% over the past five years.

Article 1 : Does the leverage ratio have an adverse impact on client clearing?
Article 2 : Euro banknotes and coins in France in 2017: continued robust demand
Article 3 : Macroprudential policy instruments: a bulwark against interbank contagion risk