In this paper, Sophie Béreau, Violaine Faubert & Katja Schmidt study the fit and the predictive performance of the Phillips curve for euro area inflation with regard to different inflation series, time periods and predictor variables, notably different global factors. They compare the relative performance of a large set of alternative global factors in the Phillips curve, such as commodity prices, import prices, global consumer inflation, global economic slack and foreign demand. They find that traditional global indicators such as oil prices and import prices provide more accurate information for euro area headline inflation than global slack measures. In what regards the forecast ability of the Phillips curve for headline inflation, authors show that it is unstable and depends strongly on the time period. Global factors provide only limited additional information for forecasting. In addition, Béreau, Faubert & Schmidt explore whether domestic demand and global factors are useful for analysing the entire conditional distribution of euro area inflation. They find that their impact varies across inflation quantiles (low vs. high inflation) and that inflation is more persistent at the low end of the distribution. They provide evidence that quantile information can lead to more accurate forecasts in periods of persistently low inflation. 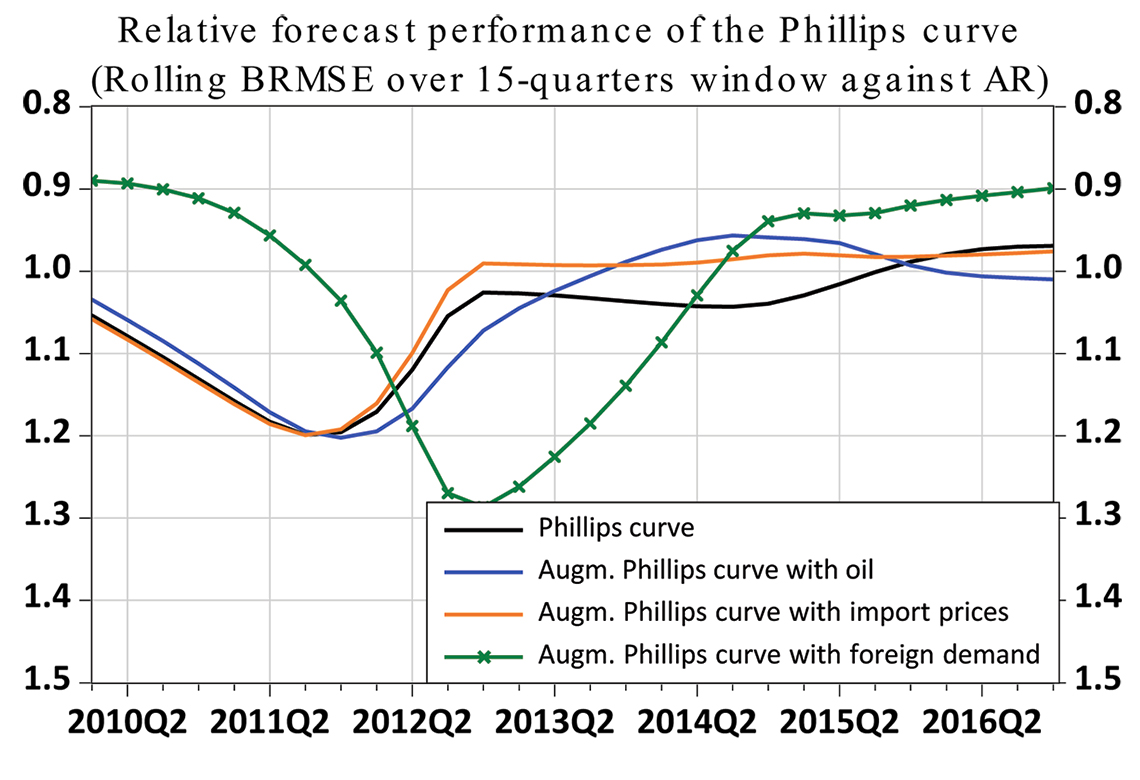 Understanding inflation developments and predicting them accurately is of paramount importance for central banks, whose objective is to deliver price stability. Those last years in particular have put standard models into question, given the systematic overprediction of inflation rates. One of these models is the Phillips curve, which remains a workhorse for inflation analysis in most central banks. In this paper, we study the explanatory power and the forecast performance of the Phillips curve for the euro area with respect to different inflation measures (headline and core inflation), time periods and predictor variables. We look in particular at the performance of alternative global indicators in augmented Phillips curve specifications, such as commodity prices, exchange rates, import prices, global consumer inflation and global economic slack measures. We find that traditional commodity price and import price indicators provide a good identification of the augmented Phillips curve for euro area headline inflation, in contrast to global economic slack measures proposed by Borio and Filardo (2007), which do not have a significant influence on euro area inflation. Global factors play a more limited role in the augmented Phillips curve for euro area core inflation.

Next, we analyse the Phillips curve relationship and the role of global indicators for euro area inflation on the entire conditional distribution of inflation using a dynamic quantile regression approach. We are interested to know whether the impact of the different predictor variables on inflation varies across inflation regimes (high and low inflation) and whether this can be exploited for forecasting. We find that the inflation process is more persistent at the left tail of the distribution, i.e. when inflation is in its lower quantiles. By contrast, domestic activity is found to have a stronger influence on inflation on the right tail of the distribution. This would be broadly consistent with findings in the literature that the Phillips curve might not be linear (see for example Dolado, 2005) and that, as in our case, inflation reacts stronger to the demand situation at higher levels of inflation. Turning to forecast considerations, we show that quantile regressions can improve the forecast ability of the Phillips curve during some periods of persistently low inflation (2014-2015), but this result cannot be easily generalized to other periods when inflation is more dynamic.