I construct a novel measure of policy preferences of the Federal Open Market Committee (FOMC) as perceived in public. This measure is based on newspaper and financial media coverage of 130 FOMC members serving during 1960-2015. Narratives reveal that about 70 percent of these FOMC members are perceived to have had persistent policy preferences over time, as either inflation-fighting hawks or growth-promoting doves. The rest are perceived as swingers, switching between types, or remained an unknown quantity to markets. Hawk and Dove perceptions capture "true" tendencies as expressed in preferred rates, forecasts and dissents of these FOMC members well. At the FOMC level the composition of hawks and doves varies significantly, featuring slow- and fast-switching hawkish and dovish regimes, due to the rotation of voting rights each year, members’ turnover and swings in preferences. 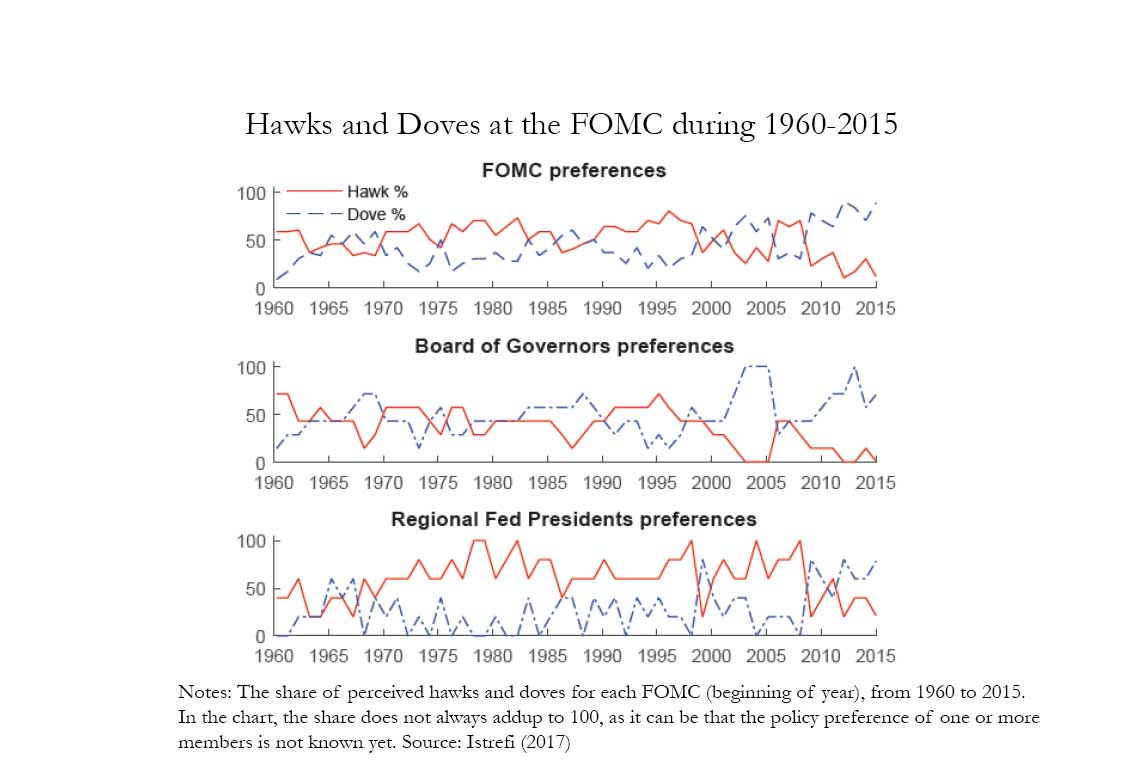 Commentators on monetary policy and market participants often refer to central bankers with labels hawk and dove, where a hawk is thought of assigning a higher priority to fighting inflation and a dove to supporting more output growth and employment. This paper quantifies these perceptions about the FOMC, the monetary policy decision-making body in the US. In a first step, a measure of perceived policy preferences of the FOMC, expressed in a hawk-dove scale, based on newspaper and financial media coverage, is presented. In a second step, perceptions are matched with "true" tendencies as expressed in FOMC transcripts, with votes and forecasts, not available to the public in real time.

Hawk or Dove type is quantified at the individual level for 130 FOMC members serving during 1960 to 2015. The period under investigation comprises the FOMC under seven Federal Reserve chairpersons, from William McChesney Martin to Janet Yellen. Perception on the type is based on the quantification of narratives in newspaper articles, financial media outlets and business reports of Fed watchers in the US with regard to policy leanings of each FOMC member with respect to inflation and economic growth (employment). To this aim, about 20,000 articles or reports from more than 30 newspapers and business reports of Fed watchers with reference to FOMC members are read (human reading).

This paper quantifies as hawk or dove about 93 percent of 130 FOMC members that served during 1960 to 2015. When observing the evolution of perceptions over time for each member, it shows that about 70 percent were perceived as all-time hawks or doves and 24 percent as swinging camps. The rest remained unknown. At the FOMC level, the hawk and dove composition of the FOMC varied substantially during 1960-2015, featuring hawkish and dovish majorities. The variation in the hawk-dove measure is due to the annual rotation of the four Reserve Bank presidents, to members’ turnover and in specific periods, to swingers, describing FOMC members whose preferences are perceived as switching over time. Large swings in preferences are observed in relation the state of the economy but also in relation to intensified discussions on price stability and inflation targets in the early 1990s and following Greenspan’s view on productivity and inflation in the late 1990s. Within the FOMC, the Reserve Bank Presidents are perceived as hawkish while the Board of Governors is perceived to switch often to dovish or hawkish majority.

To investigate whether hawk and dove perceptions capture "true" tendencies, they are compared with actions (preferred rates, votes, forecasts) of each FOMC member over time, whenever available. Overall there is a strong match between perceptions and actions: (i) majority of hawkish (dovish) preferred rates belong to perceived hawks (doves), (ii) dissents for tighter policy are predominantly cast from perceived hawks and dissents for ease are cast from perceived doves, and (iii) perceived hawks tend to forecast on average a higher inflation than doves.

Overall, this paper builds a hawk-dove measure for the FOMC and it shows that it is informative of individual FOMC member’s actions and the dynamics of the FOMC, not observed in real time. This measure can be used for several research purposes, i.e., to investigate questions that relate to market perceptions on who is in majority, the hawks, the doves or a balance, with market expectations on future path of monetary policy or inflation expectations or to learn about monetary policy shocks given exogenous changes in the composition of the preferences due to the rotation of voting rights of Reserve Bank presidents, among other interesting questions.