Motivated by empirically characterizing the relationship between financial conditions and downside macroeconomic risks in the euro area, I develop a regime-switching skew-normal model with time-varying probabilities of transitions. Using Bayesian methods, the model estimates show that a strong cyclical pattern emerges from the conditional skewness (a measure of the asymmetry of the predictive distribution), which has a tendency to rapidly decline to negative territory prior and during recessions. However, the inclusion of financial-specific information in time-varying probabilities does not help to anticipate such skewness nor more generally to provide advance warnings of tail risks. 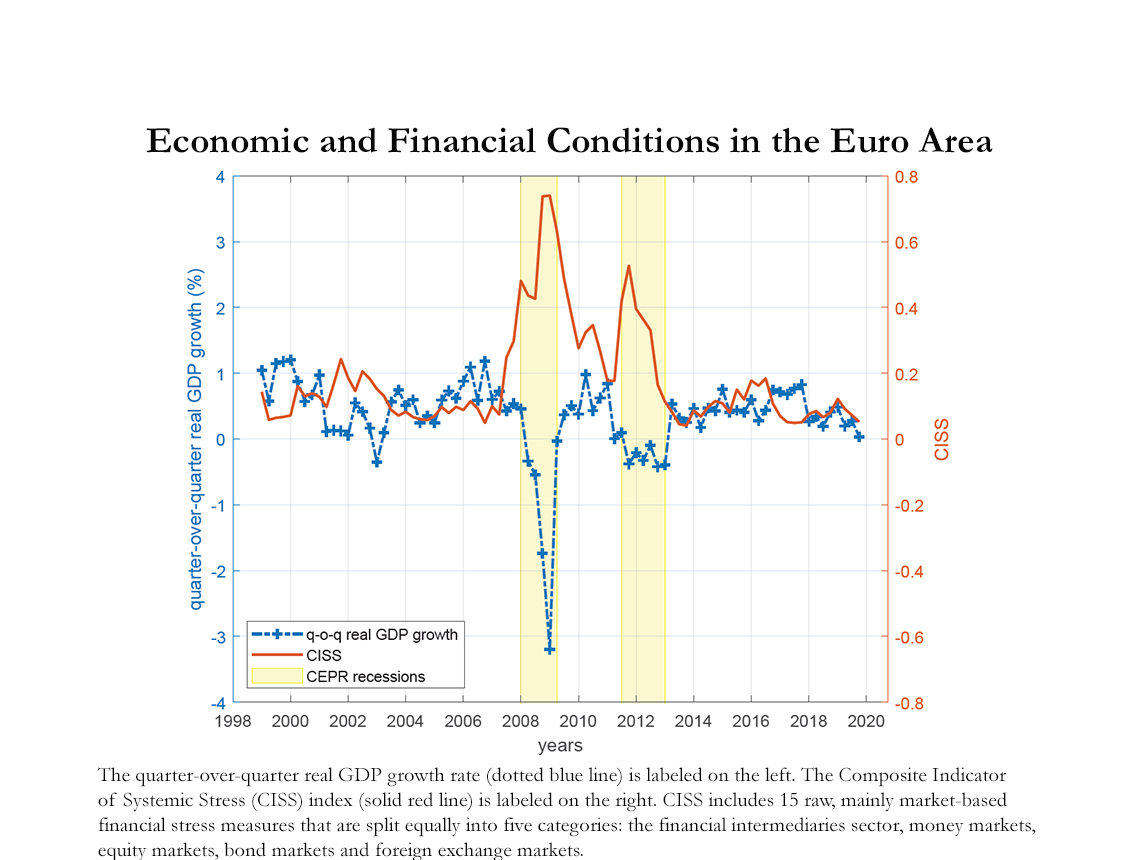 Following the Great Recession, macroeconomic risks have received substantial attention from the profession. For example, the European Central Bank (ECB), like many central banks, communicates regularly in press conferences its risk perception on inflation and growth over the foreseeable future. The ECB's Governing Council informs whether it sees these risks as balanced, on the upside or on the downside. From an academic perspective, there is evidence of a negative relationship between financial conditions and the lower quantiles of real economic growth, suggesting that financial conditions have significant predictive content for downside risks to growth.

In this paper, I introduce and develop a regime-switching model with time-varying transition probabilities to estimate the moments of the distribution of euro area real gross domestic product (GDP) growth conditional on economic and financial conditions, and to characterize business cycle variation in the probability distribution and time-varying risks around GDP growth. In particular, I focus on a non-Gaussian model based on the skew-normal distribution, and in which location, scale and shape parameters are allowed to vary over time according to independent two-state Markov-switching processes. In the setup, the probability of moving between states is allowed to depend on economic and financial conditions. By doing so, I am able to explore the predictive content of a tightening of financial conditions for changes in the distribution of GDP growth over time. The method provides an empirical characterization of business cycle variation of risks that goes beyond what can be achieved through Gaussian models, and allows for the construction of informative measures of downside macroeconomic risks.

By allowing asymmetric distributions across time as well as mixing probabilities, the model is able to reproduce well-documented evidence on time variation in the moments of the conditional (predictive) distribution of GDP growth, but also to fully characterize the cyclical variation in risk, as measured for example by the conditional skewness. Model estimates capture recurrent features of business cycles in modern economies like periodic shifts in the long-term mean rate of economic growth and the rise in volatility observed during economic downturns. Furthermore, I provide new evidence that, during economic downturns, the skewness of GDP growth tends to be negative, implying that extreme values on the left side of the mean are more likely than the extreme values of the same magnitude on the right side of the mean, leading to a left tail of a large negative output. The skewness also tends to decline in anticipations of recessions, a feature that is also observable for the U.S. economy.

However, the inclusion of financial-specific information in time-varying probabilities helps poorly to predict different features of the GDP growth distribution, including conditional skewness. Indeed, the model estimates rule out any role of financial conditions in the transition probabilities governing location, scale and shape parameters as the mass of the posterior distributions of elasticities linking financial conditions to transition probabilities lie both on the positive and negative side. At the same time, the signals coming from financial conditions are sporadic, and in particular, given the limited number of transitions observed in the sample, it turns out difficult to obtain precise estimates of some of the parameters. Thus, when assessed its statistical performance, the model that incorporates an aggregate indicator of financial stress does not improve out-of-sample forecasts in terms of point, density and tail risks. Therefore, financial conditions cannot be seen as a warning signal of downside risks in GDP growth. A caveat of the analysis is the use of quarterly data, while financial variables are often available at higher frequency. Considering a real-time nowcasting exercise with high-frequency data might be more accurate to predict downside risks.