Working Paper Series no. 764: Fiscal Consolidations and Informality in Latin America and the Caribbean

The transmission mechanisms of fiscal policy are significantly affected by informality in the labour market. Extending a narrative database of fiscal consolidations in 14 countries from Latin America and the Caribbean between 1989 and 2016 in order to account for heterogeneity in terms of commitment to the reforms, this paper shows that tax-based and spending-based multipliers are both recessionary and do not significantly differ one from another in this region. Furthermore, these multipliers decline in absolute value as the level of labour informality increases in the economy, although evidences are less robust for spending-based consolidations. An analysis of the effects of tax-based consolidations on private demand suggests that labour market informality constitutes a short-term social buffer that attenuates the contractionary effects of this type of policy by increasing investment opportunities through tax evasion and entrepreneurial alternatives to unemployment for dismissed workers. 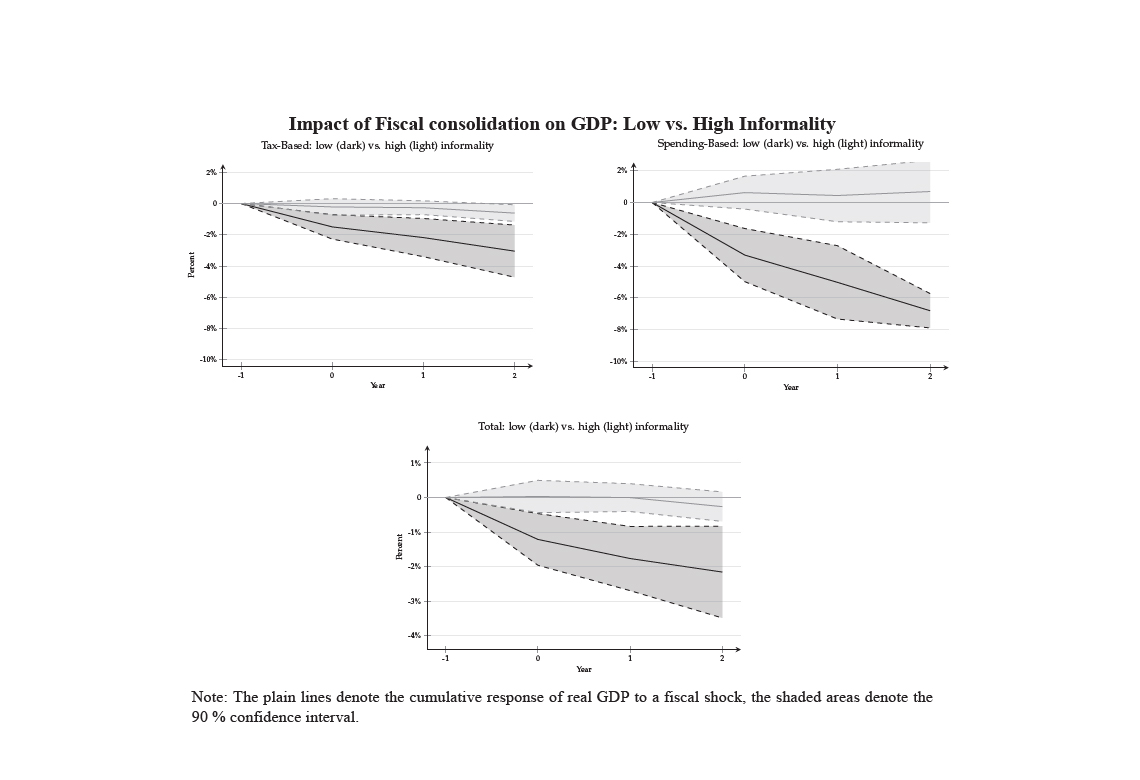 What should a Government do when the public finances are highly deteriorated, either due to a high public debt or to a large fiscal deficit? This question has always haunted policy makers. The recent history of Latin America and the Caribbean (LAC) provides many examples of fiscal mismanagement episodes that led to severe crises and negatively impacted the development prospects of the region, from the lost decade due to an unsustainable level of public debt to the extreme recession in Venezuela after oil prices, and government revenues, fell sharply. On the contrary, improved fiscal management and sounder public finances in several countries of the region led to the implementation of countercyclical policies and therefore reduced the impact and duration of recent economic crises (Vegh and Vuletin, 2014; Miotti et al., 2012). In this context, it becomes highly important to understand which instruments are the most appropriate to prevent such dramatic events from happening and what the consequences of such interventions on the economy are.

Alesina et al. (2017) study the effects of public finances consolidation measures and find that in OECD countries, both tax hikes and spending cuts have a recessionary impact on output and that this negative impact is significantly higher in the case of tax hikes. In a subsequent article, Alesina et al. (2018) argue that this more negative effect of tax-based fiscal consolidations with respect to spending-based fiscal consolidations is a strong, established result of the recent literature that uses the narrative approach to identify fiscal shocks. Using a similar approach, Carrière-Swallow et al. (2018) find that, contrary to the evidence obtained in advanced economies, the tax-based and spending-based fiscal multipliers are not significantly different one from another in LAC. The authors also present evidence indicating that the tax-based fiscal multiplier in LAC could be smaller in absolute value, i.e. less recessionary, than in OECD countries. Theoretical insights are still inconclusive to explain these results, but the presence of large informal labour markets is a plausible explanation.

In this article, I examine the effects of fiscal consolidations on output in LAC. Combining a database of fiscal consolidation episodes in 14 countries of the region with a database on informality in the labour markets and with macroeconomic data between 1989 and 2016, I ask whether the fiscal multiplier during consolidation episodes is affected by the level of labour market informality in the economy. As this characteristic of developing countries is directly linked to a relatively smaller tax base than in countries with low levels of informality, the effect of a fiscal consolidation could affect a smaller share of the economic agents and therefore have a relatively smaller impact on total output. However, for the same reason, a fiscal consolidation accounting for a given percentage of GDP will likely have a greater impact on the formal sector of a highly informal economy than in an economy with low levels of informality, and therefore have a stronger impact on output. As the response of the fiscal multiplier to the presence of informality is undetermined, an empirical approach is suitable. I hypothesize that informality in the labour market affects significantly the transmission mechanisms of fiscal policy, and hence the fiscal multiplier.

The results indicate that the spending-based and tax-based multipliers are both recessionary but do not differ one from another in LAC.  In addition, the fiscal multiplier is positively affected by the presence of informality during fiscal consolidations, which have therefore a less recessionary impact, all other things equal, in countries with large informal labour markets. The analysis of the effects of tax-based consolidations on private demand suggests that labour market informality constitutes a short-term social buffer that attenuates the contractionary effects of this type of policy by increasing investment opportunities through tax evasion and entrepreneurial alternatives to unemployment for dismissed workers.