Recent influential work argue that a gradual increase in sales tax stimulates economic activity in a liquidity trap by boosting inflation expectations. Higher public infrastructure investment should also be more expansive in a liquidity trap than in normal times by raising the potential interest rate and increasing aggregate demand. We analyze the relative merits of these policies in New Keynesian models with and without endogenous private capital formation and heterogeneity when monetary policy does not respond by raising policy rates. Our key finding is that the effectiveness of sales tax hikes differs notably across various model specifications, whereas the benefits of higher public infrastructure investment are more robust in alternative model environments. We therefore conclude that fiscal policy should consider public investment opportunities and not merely rely on tax policies to stimulate growth during the COVID-19 crisis. 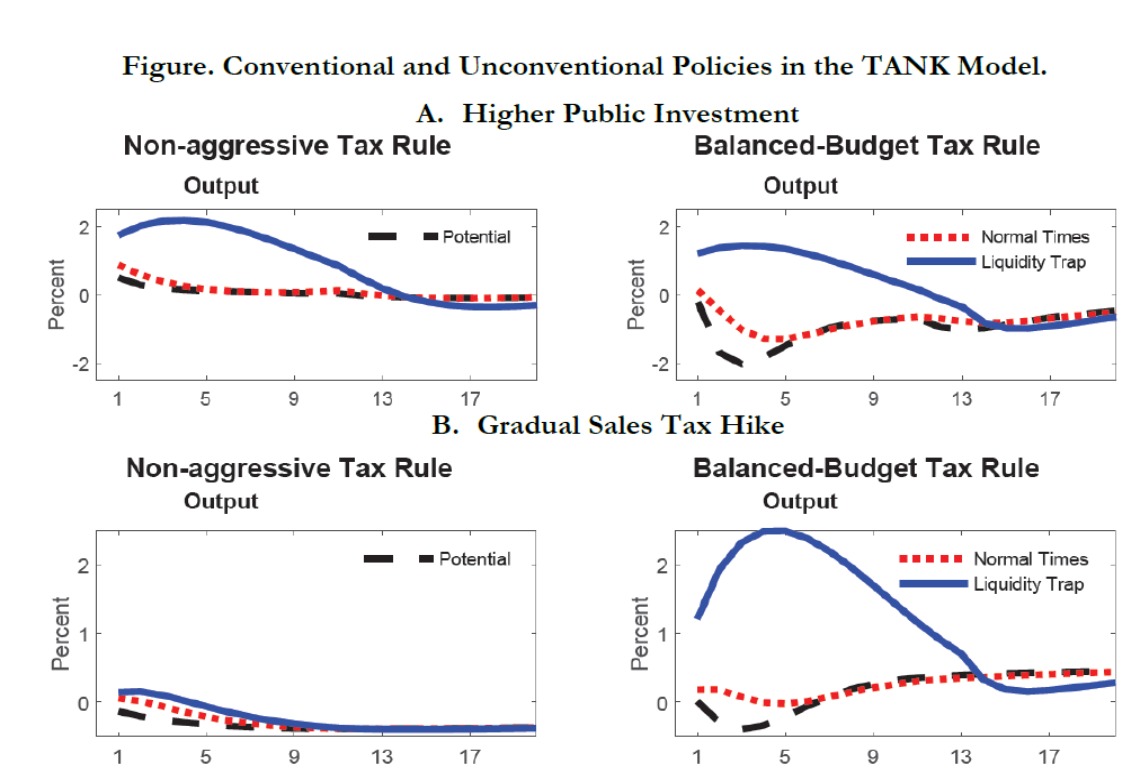 The recent academic literature has promoted a new type of tax-based unconventional policy which may stimulate growth while being self-financed: a credible commitment to a higher future sales tax would boost demand by increasing households' incentives to  consume more today. Higher public infrastructure spending, a more conventional fiscal policy, has also received significant attention for two reasons. First, given the low level of public investment in leading economies, the marginal returns on certain types of higher spending are likely elevated. Second, higher public investment combines the benefits of providing higher demand when the economy is in a recession and raising potential output afterward.

Our starting point is that the gains of policies that are pursued in practice should be robust across different models. In this vein, we begin our analysis using a stylized New Keynesian model with a fixed private capital stock. Next, we move on to examining the robustness of the results in a more empirically-realistic model, a two-agent New Keynesian (TANK henceforth) model with endogenous formation of private capital and hand-to-mouth agents. In both models, we assume that the government uses either a non-aggressive fiscal rule based on the labor income tax rate, such that this tax rate remains almost constant after standard shocks at a five-year horizon, or a balanced-budget rule based on the same tax.

Our main findings are as follows. First, we find a lack of robustness of the unconventional fiscal policy in a long-lasting liquidity trap: a gradual tax hike strategy works well in the stylized model, but, within the TANK economy, such a policy strategy quicly becomes contractionary unless labor income taxes are cut aggressively to balance the surplus (figure below). Second, higher public infrastructure spending has robust favorable effects on output across both models. Our conclusion is that fiscal reforms should therefore consider public investment opportunities and not exclusively rely on tax policies to stimulate growth.