Working Paper Series no. 698: Flight-to-safety and the Credit Crunch: A new history of the banking crisis in France during the Great Depression

Despite France's importance in the interwar world economy, the scale and consequences of the French banking crises of 1930–1931 were never assessed quantitatively due to lack of data in the absence of banking regulation. Using a new dataset of individual balance sheets from more than 400 banks, Patrice Baubeau, Eric Monnet, Angelo Riva & Stefano Ungaro show that the crisis was more severe and occurred earlier than previously thought, and it was very asymmetric, without affecting main commercial banks. The primary transmission channel was a flight-to-safety of deposits from banks to savings institutions and the central bank, leading to a major, persistent disruption in business lending. In line with the gold standard mentality, cash deposited with savings institutions and the central bank was used to decrease marketable public debt and increase gold reserves, rather than pursue countercyclical policies. Despite massive capital inflows, France suffered from a severe, persistent credit crunch. 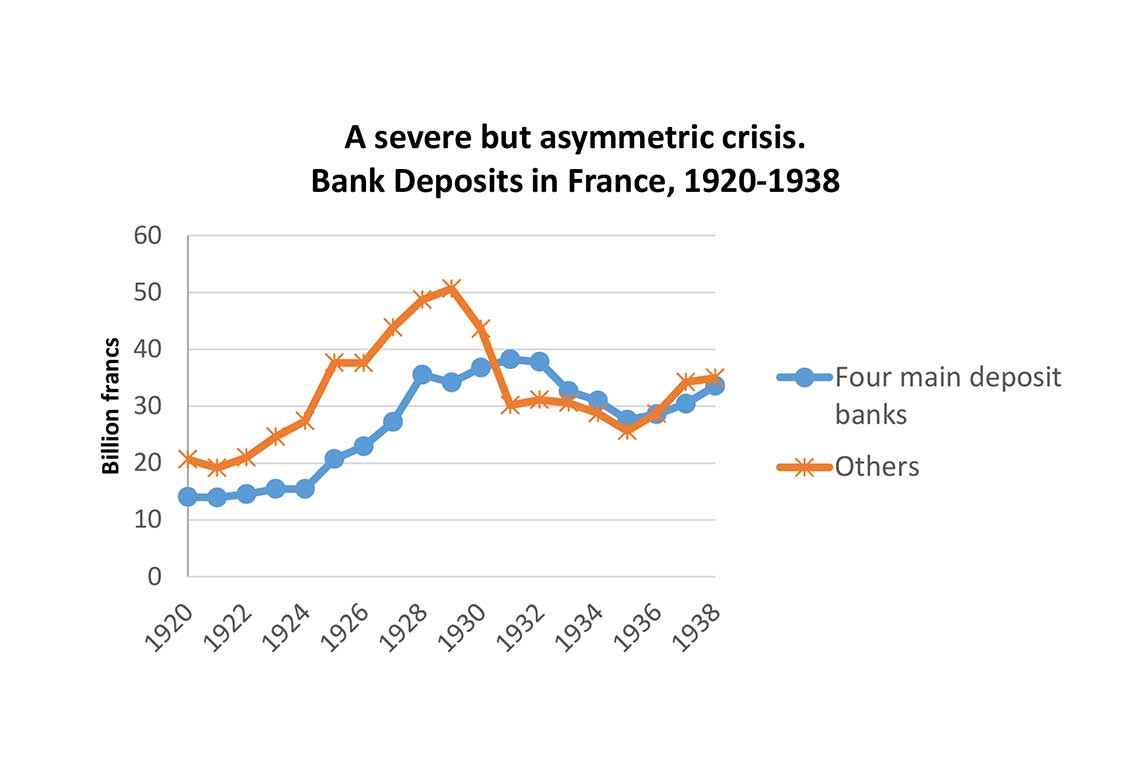 Previous research has downplayed the role of banking panics and financial factors in the French Great Depression of the 1930s. Although scholars acknowledged that some banking failures occurred in France during the period 1930-1932, the common view of the absence of significant economic consequences has persisted. It results from the lack of statistics able to provide a comprehensive picture of the magnitude of banking panics, in the absence of banking regulation in France prior to 1941. The usual method to compute series of bank credit and deposits relied on the balance sheet of the four largest commercial banks – whose data were easily available – and to assume that those banks represented half of the banking sector. These large banks did not experience difficulties and their deposits did not decrease in 1930 and 1931.

Based on extensive archival research we have found the balance sheets of more than 400 hundred banks in interwar France. This finding gives a completely different view of the 1930-1931 banking crises. Whereas the four large commercial banks escaped the crisis, the remainder of the banking system experienced two dramatic waves of panic (end of 1930 and end of 1931), such that its deposits decreased by 40% between 1929 and 1931. The decrease in credit was even stronger (-44%). Banking panics were concentrated in 1930-1931. The decrease of banking activity that followed starting 1932 is fully explained by deflation.

Banking theory explains the mechanisms of bank runs, but it is silent on where deposits go when they are withdrawn from the banking system. Traditional monetary interpretations point to a drop in the money multiplier and in the money base, either because cash is hoarded or because deposits remain frozen in bankrupt banks. Our estimation of hoarded cash and frozen deposits show that they cannot account for the bulk of deposits that fled the banking system in 1930 and 1931. Instead, most of these deposits went to savings institutions (Caisses d’Epargne) which collected deposits at a regulated interest rate and invested their assets in Treasury bonds. We characterize this phenomenon as a flight-to-safety. Because of capital inflows and the flight-to-safety from banks to non-banks, the total amount of deposits slightly increased in France from 1930 to 1932. How can a country experience deflation and a decline of about 1/3 in real activity, whereas at the same time the money supply increases? The answer to this question lies in the dramatic decrease of credit. A credit crunch occurred because the institutions that received deposits during the banking panic – namely the saving institutions and the central bank – did not lend to the economy. New cash deposited with the savings institutions (Caisses d’épargne) was used directly to repay marketable public debt, which decreased between 1928 and 1933.
The large banks which were not affected by the crisis deposited 25% of their assets with the central bank. The central bank increased very modestly its lending to the economy (both banks and non-banks) but it was dwarfed by the dramatic increase in gold reserves, the ultimate safe asset. Gold reserves doubled between 1929 and 1932. No financial institution replaced the banking system as a lender to the economy.

publication
Working Paper Series no. 698: Flight-to-safety and the Credit Crunch: A new history of the banking crisis in France during the Great Depression
Download (EN)