In this paper, we show that exporters react more strongly to a cut in tariffs by a distant country when their banks have already been specializing in funding exports to this country. To make our case, we build upon a theoretical model where an informational advantage provided by the exporter's bank results in a lower distribution cost in the destination country. We test the implications of this model for French exporters using the 2011 free trade agreement between the European Union and South-Korea as a quasi-natural experiment. We measure a bank's specialization in Korea using granular information on bank-firm credit lines and firm-level exports in the years preceding the agreement. We assess how customers of different banks react to this trade liberalization episode using detailed information on the bilateral tariff cuts and disaggregated data on French export flows at the firm-product level. We find robust evidence that the specialized lenders help exporters to respond more strongly to changes in tariffs. The effect is strong for all firms along the extensive margin, but only for less productive exporters along the intensive margin. 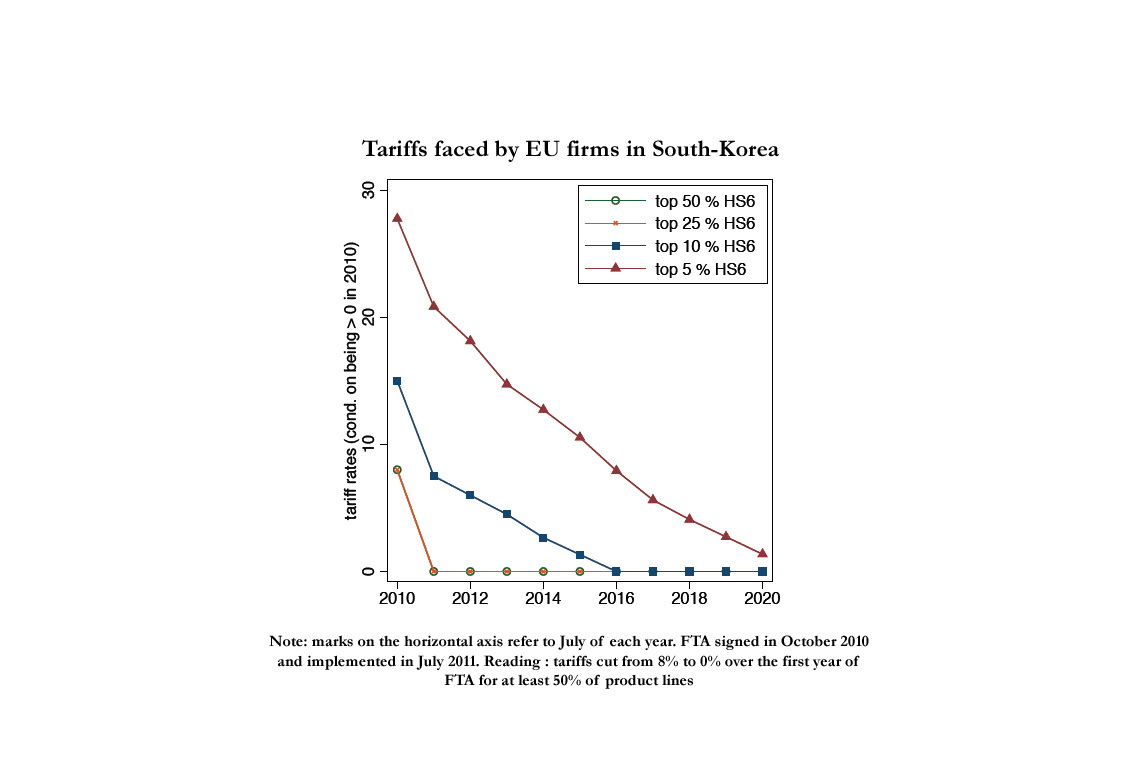 In this paper, we investigate how the characteristics of the banks which fund exporters impinge on firms' individual trade elasticities. We argue that some banks gain a specific knowledge of business conditions in distant markets over time through their repeated interactions with customers which export to these markets. This gives such banks an informational advantage, or a destination-specific specialization, which may benefit other customers in search of funding for new projects of exports to the same markets. Being connected to a specialized bank or not therefore creates an additional source of heterogeneity between exporters targeting a specific market, beyond the heterogeneity in the firms' productivity parameter which is standard in trade models with heterogeneous firms.

To make our case, we first sketch a theoretical motivation based on a standard trade model with monopolistically competitive exporters. The informational advantage provided by the exporter's bank (reflecting the bank's specialization) is represented by a lower unitary distribution cost in the destination country. In the model, a sufficient statistic -- the share of unitary distribution costs in firms' total trade costs -- determines exporters' reaction to a change in tariffs, both at the extensive and intensive margins.  Following a cut in foreign tariffs, firms with a lower share of distribution costs are more likely to enter the foreign market, or to increase more their sales when they already operate into that market.

We then test the predictions of this model for French firms using the 2011 Free Trade Agreement (FTA) between the European Union and the Republic of South-Korea as a quasi-natural experiment. The agreement was signed on October 1st 2010 and entered into force on July 1st 2011. It is quite a relevant experiment for our purpose, as negotiations were conducted for the entire European Union by the European Commission, and hardly reflect vested interests of the individual French exporters in our sample. The FTA itself was very ambitious and encompassing: 70% of tariff lines were cut to zero on the first  day of implementation, while tariffs were to be dismantled within five years for goods representing  98.7% of the total value of South-Korean imports. Last, the agreement offers a variety of tariff trajectories, with a significant share of product lines facing staggered cuts over periods of 3 to 15 years.

We estimate regressions to explain export flows of French firms to Korea over the years 2007-2015 at the firm-product level, where we exploit two sources of variance for identification: (i) changes in tariffs over time and across products, and (ii) firm-level heterogeneity based on the specialization of their banks in the Korean market before the FTA. We control for various combinations of firm, product and time fixed effects to avoid potential biases associated with obvious confounding factors such as firm-level productivity shocks and product-specific demand shocks. We also split our sample of exporters into two groupings according to their estimated productivity, whereby we gauge a firm's productivity based on its export performance in two benchmark markets for French firms (Belgium and the US).