Working Paper Series no. 772: How Do Markets React to Tighter Bank Capital Requirements?

We use hikes in the countercyclical capital buffer [CCyB] to measure how tighter bank capital requirements affect their solvency and value, according to market participants. Two features of the CCyB in Europe allow for a unique identification strategy of the effect of such requirements. First, national authorities make quarterly announcements of CCyB rates. Second, these hikes affect all European banks proportionally to their exposure to the country of activation. We show that CCyB hikes translate in lower CDS spreads for affected banks, indicating that markets perceive higher solvency. On the other hand, bank valuations do not react. Markets therefore consider that higher capital requirements translate into more stable banks at no material cost for shareholders. We claim that these effects relate to the capital constraint itself, as opposed to the potential signal conveyed on the state of the financial cycle. 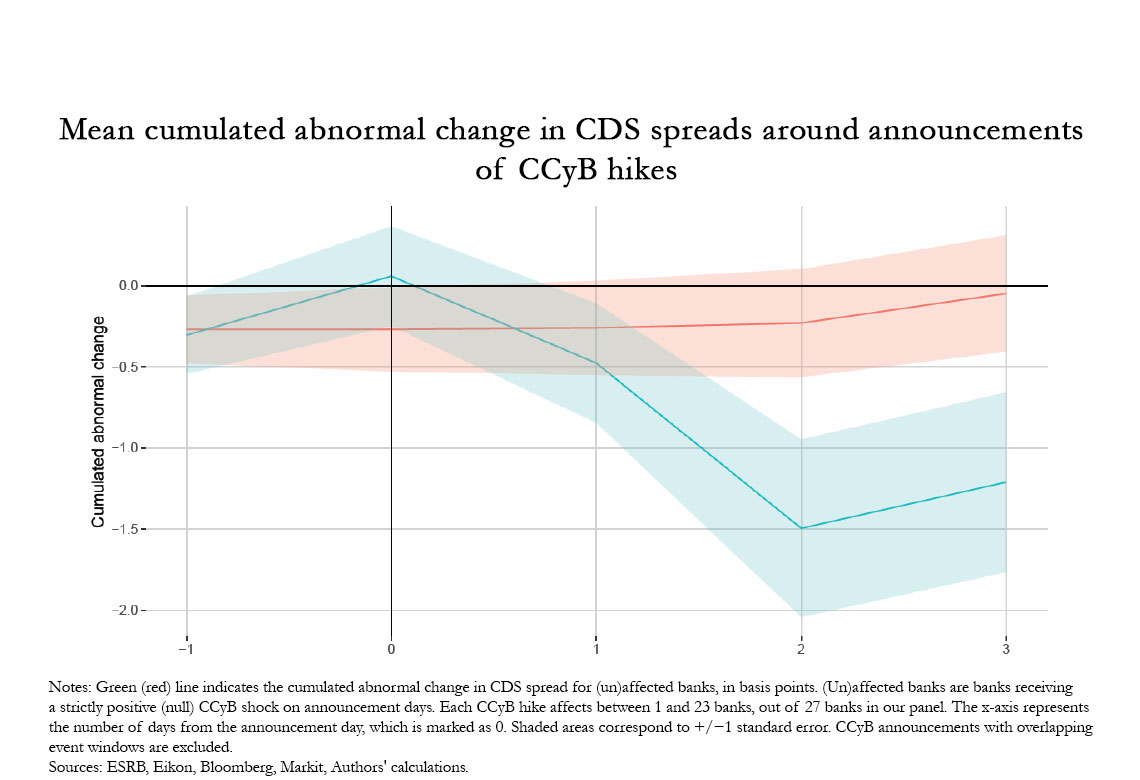 The 2008 financial crisis has highlighted the need for sufficient bank capital, as banking crises and their companion credit crunches are particularly damaging to the real economy. Consequently, the main regulatory response to the crisis has been a large increase in capital requirements. In doing so, it is key for regulators to strike the appropriate balance between the benefits of more stable banks and the cost of more expensive capital.
Unfortunately, it is difficult to assess the actual impact of higher capital requirements. First, they often result from years of negotiation, which dilutes their impact over time. Second, since regulators usually impose similar requirements on all banks, it is difficult to study the differential impact of capital requirements across banks. In this study, we use the institutional setup of the so-called countercyclical capital buffer (hereafter CCyB) in the European Economic Area (hereafter EEA) to overcome those challenges.
The countercyclical capital buffer is a time-varying capital requirement introduced in Basel III and designed to tackle the procyclicality of bank credit. The CCyB offers two distinctive features to overcome the aforementioned difficulties. First, national authorities choose CCyB rates on a quarterly basis. Second, the CCyB rate in a given country applies to all banks of the EEA, proportionally to the share of that country in their total relevant exposures.
We leverage this framework to feed the debate on the costs and benefits of capital requirements: do they enhance bank resilience, and at which cost for shareholders? In theory, CCyB increases could trigger market reactions through two channels. First, they reveal private information that the national regulator may hold on the state of the economy. Macroprudential authorities typically raise the CCyB when the economy is in good shape, but also when financial risks are building up. We label this the signalling channel. The second channel relates to the requirement itself, which tightens the capital constraint and forces banks to hold more capital. We label this the capital channel. It is important to disentangle both channels, since the capital channel alone captures the structural impact of higher capital requirements.
We proceed in three steps. We first investigate how country-level CCyB decisions affect country-level stock index and sovereign credit default swap markets (hereafter CDS). We find that country-level variables do not systematically react to country-level CCyB increases, which suggests that CCyB announcements do not systematically convey a signal on the state of the economy. Any impact on banks’ securities is thus attributable to the capital channel. Then, we show that a 1-percentage point bank-level CCyB increase translates in a 13 basis points decrease in that bank’s CDS spread within three days from the announcement – or an 18% decrease in CDS spread level. As such, financial markets believe that higher capital requirements lower banks’ probability of default, and factor this into lower CDS spreads. Finally, we find that bank-specific CCyB increases are not associated with any stock return regularity. This result suggests that shareholders do not believe this additional resilience comes at any cost for them.
These results are important to understand the costs and benefits of capital requirements. They show that a modest increase in capital requirements can strengthen banks at no cost for shareholders. Consequently, regulators may have further room to tighten capital requirements without triggering a negative market reaction. In future research, it will be interesting to exploit this setup to understand how capital requirements affect lending, and how CCyB releases may asymmetrically affect financial markets.