Though most central banks actively intervene on the foreign exchange market, the literature offers mixed evidence on their effectiveness: particularly for unannounced interventions. We use new, declassified data from the archives of the Bank of England and the institutional features of the Bretton Woods era to estimate the effects of intervention on the exchange rate. We find that a purchase of pounds equivalent to 1% of the money supply causes a statistically significant, 4-5 basis point appreciation in the pound. 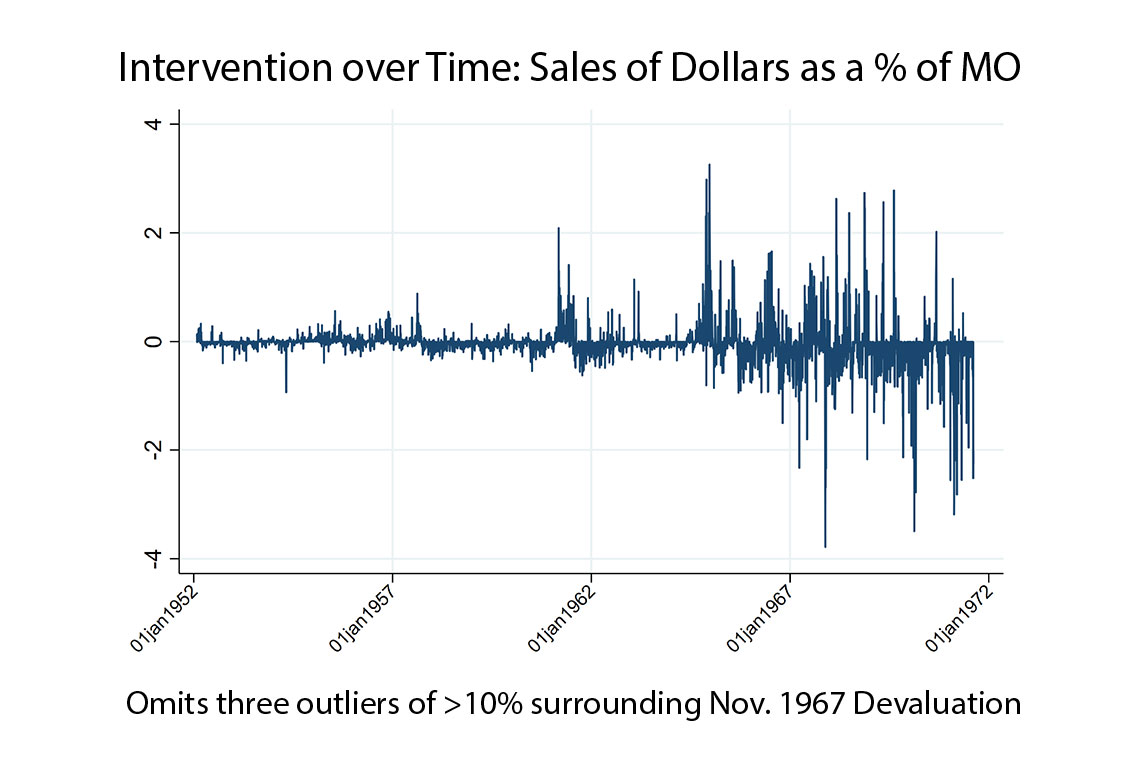 Most developing and many advanced economies intervene in foreign exchange markets to manage volatility and unwanted movements in the exchange rate. These operations involve sales and purchases of reserves to try to influence the exchange rate. Many central banks both sterilize their interventions (meaning they have no effect on the monetary policy stance) and conduct interventions secretly (meaning they are unannounced beforehand and unacknowledged after the fact). From a recent survey of 22 Emerging Market Economy central banks, 17 reported “Never” or “Rarely” pre-announcing their intervention.

Using a novel dataset on the Bank of England's daily operations during the Bretton Woods era, we conduct a new analysis of such unannounced, never-acknowledged sterilized intervention. We find modest, statistically significant effects on the level of the exchange rate. Our results suggest that a sterilized, unannounced sale of dollars equivalent to 1% of UK M0 causes a 4-5 basis point appreciation of the pound. This finding that sterilized intervention has significant effects even absent a significant signalling channel at least partially rationalizes the decision of many central banks to conduct intervention in secret.

The academic literature on intervention focuses disproportionately on the few central banks that intervene publicly and publish their intervention data. Even when circumstances have allowed for the study of other central banks, it is not always clear whether the operations were really secret or promptly sterilized. This renders disentangling the channels at play challenging. Even with access to quality data, all studies of the effects of intervention must grapple with the issue of endogeneity, as intervention is far from randomly assigned.

In this paper we deal with the data availablility issue by relying on historical daily data from the Bank of England archives (figure above). These now-declassified data record the Bank of England’s secret, sterilized foreign exchange operations.

We also explore a second IV approach using lagged gold reserves as an instrument for intervention. The identifying assumption here is that lagged gold reserves reflect the entire history of shocks and intervention decisions, and are thus relatively orthogonal to current developments in financial markets. We obtain similar results (estimates of the same sign and magnitude) but much less precisely estimated due to low power in the first stage.

Finally, in addition to these two IV strategies, we also take an approach that identifies exogenous shocks to intervention as deviations from a policy rule estimated via an adaptive least absolute shrinkage and selection operator (lasso). Deviations from this rule may have an interpretation as exogenous shocks to intervention, but only if we can argue that the deviations are not taken in response to current developments in financial markets. To do so, we restrict attention to the deviations that occur on UK-specific holidays, during which the Bank of England was closed (and almost never intervened) while the pound continued to trade in New York, Zurich, and other world currency markets.