Working Paper Series no. 655: Inflation Targeting as a Shock Absorber

We study the characteristics of inflation targeting as a shock absorber in response to large shocks in the form of natural disasters for a sample of 76 countries over the period 1970-2015. We find that inflation targeting improves macroeconomic performance following such shocks as it lowers inflation, raises output growth, and reduces inflation and growth variability compared to alternative monetary regimes. This performance is mostly due to a stronger response of monetary policy and fiscal policy under inflation targeting. Finally, we show that only hard but not soft targeting reaps the fruits: deeds, not words, matter for successful monetary stabilization. 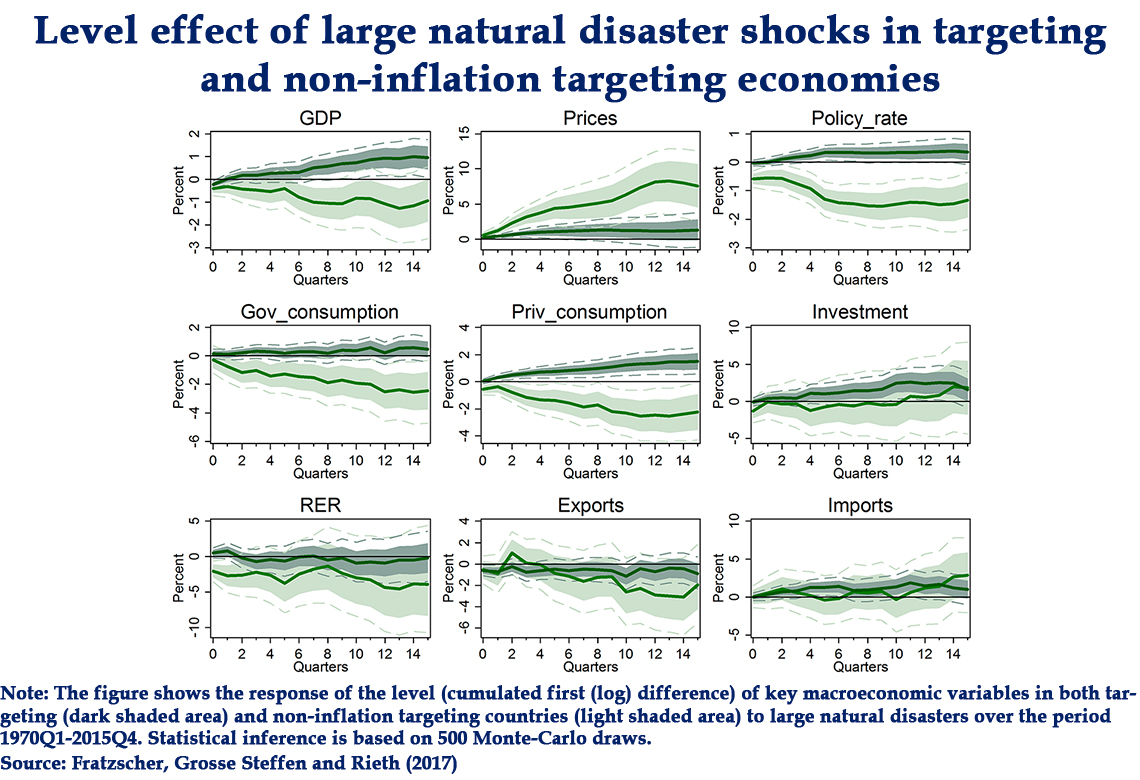 Inflation targeting has been praised for its success in bringing down inflation and raising credibility and accountability of policymakers. The costs of “cleaning up” after the global financial crisis, however, dramatically changed the perception of IT, since it may disregard the build-up of financial imbalances through its narrow focus on consumer price developments. As a result, scholars and policymakers today call for a refinement of the IT framework by allowing for more flexibility.

This paper exploits the exogenous occurrence of natural disasters in order to answer the question whether countries operating under IT have a better macroeconomic performance in response to large adverse shocks than those with alternative regimes. We document important differences in the dynamic responses of countries under IT (targeters) and under alternative monetary regimes (non-inflation targeters) to large natural disaster shocks (Figure below).

Targeters perform significantly better regarding both the level and the volatility of output and prices. While GDP drops immediately under both regimes, the initial decline is smaller under IT and the subsequent recovery is stronger and faster. Four years after the shock, output is about two percentage points higher than under alternative regimes. Moreover, consumer prices increase significantly less for targeters. The difference to non-targeters is about six percentage points after four years.

The results suggest that targeters rely on a different monetary-fiscal policy mix. The policy responses also significantly lower the shock-induced volatility of changes in output, consumer prices, consumption and investment relative to non-targeters. Lower volatility, in turn, is associated with smaller countercyclical private credit risk and lower term premia. The stability of consumer prices, in particular, translates into a more stable real exchange rate and implies relatively higher export and lower import growth under IT.

Finally, we show that only hard but not soft targeting reaps the fruits: deeds, not words, matter for successful monetary stabilization. The paper provides an analysis of the mechanisms behind these results, as well as extensive robustness checks.

The findings of the paper have a number of implications for central banks. They show that while IT may not strictly be a superior policy mandate in open economies in normal or tranquil times - as shown by the existing literature - it is a better mandate in crisis times, at least when the domestic economy is hit by a large real shock, such as a natural catastrophe. The better adjustment to large natural disasters of IT countries also suggests that IT has been more of a savior during the Global Financial Crisis than thought.

However, this holds only if a central bank does not merely pretend to follow an IT strategy, but if it has gained credibility through a successful track record on IT. Therefore, it should be considered in the debate on reforming the present IT frameworks toward more flexibility that allowing for prolonged deviations from the target range come at a cost in terms of lower shock resilience.