A number of central banks in advanced countries use ranges, or bands, around their inflation target to formulate their monetary policy strategy. The adoption of such ranges has been proposed by some policymakers in the context of the Fed and the ECB reviews of their strategies. Using a standard New Keynesian macroeconomic model, we analyze the consequences of tolerance range policies, characterized by a stronger reaction of the central bank to inflation when inflation lies outside the range than when it is close to the target, ie the central value of the band. We show that a tolerance band should not be a zone of inaction: the lack of reaction within the band endangers macroeconomic stability and leads to the possibility of multiple equilibria; the trade-off between the reaction needed outside the range versus inside seems unfavorable: a very strong reaction, when inflation is far from the target, is required to compensate a moderately lower reaction within tolerance band; these results, obtained within the framework of a stylized model, are robust to many alterations, in particular allowing for the zero lower bound. 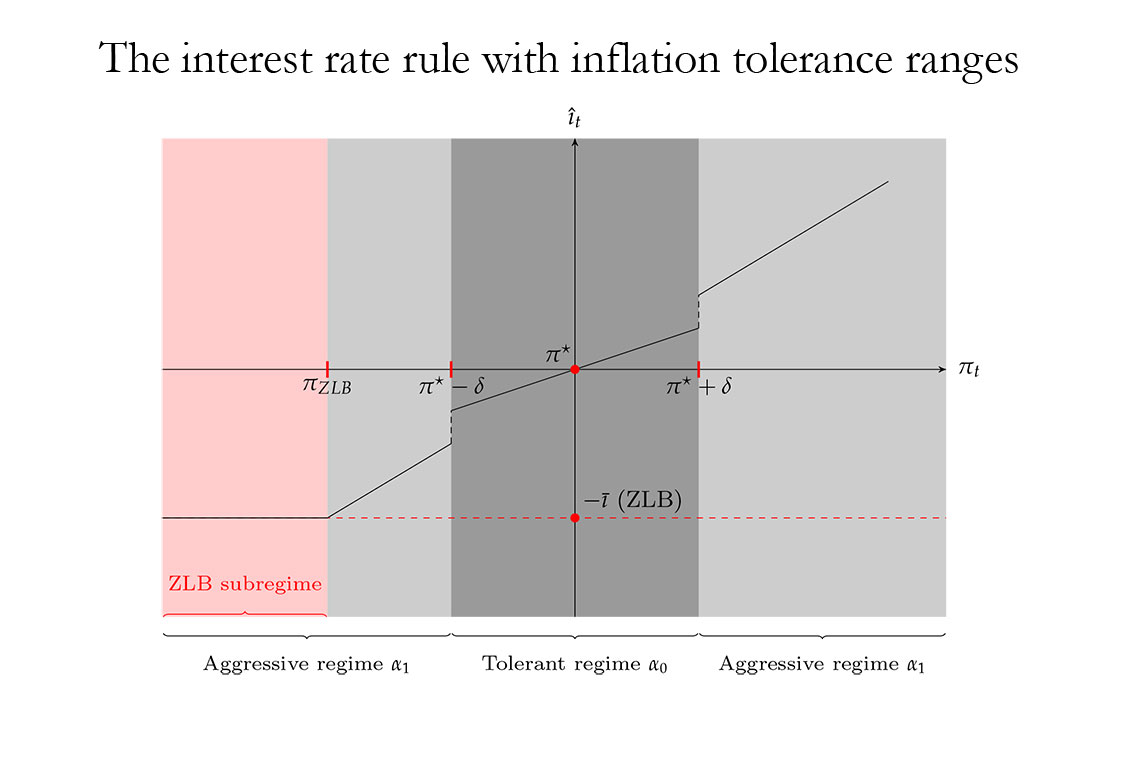 In the context of recent Monetary Policy Strategy Reviews in the US and the euro area, there has been a renewed interest for the notion of an inflation “tolerance band”, as a possible element to include in a revamped  monetary policy framework.

In spite of the recurrence of debates about inflation ranges in discussions of monetary policy frameworks, the analytical literature is surprisingly scarce on the properties of such set-ups. To our knowledge, there has not been a systematic attempt to study such policies in the New-Keynesian model - arguably by now the most standard set-up for monetary policy analysis. The aim of this paper is to contribute to filling this gap.

In this paper, we interpret the notion of “tolerance bands” as the central bank having a more aggressive response to inflation when inflation is outside the “tolerance band” than when it lies within the band. (Other interpretations are briefly discussed in the paper). This notion appears as an extension of the concept of indifference band, in which the degree of indifference to inflation, within the band, is not complete and may take on alternative values.

This approach is particularly relevant in the context of the euro area debate. Indeed, back in the initial stage of the euro, prior to 2003, the framework of the Eurosystem could be interpreted as an “indifference range”. More recently, some policy proposals for inflation “tolerance bands” were calling for a higher degree of flexibility in monetary policy. The idea was that, whenever inflation is reasonnably close to the target - and reflecting secondary objectives for monetary policy, such as financial stability concerns-, a given deviation of inflation from target may call for a smaller reaction than otherwise warranted by a strict inflation targeting.