Working Paper Series no. 808: Intergenerational Homeownership in France over the 20th Century 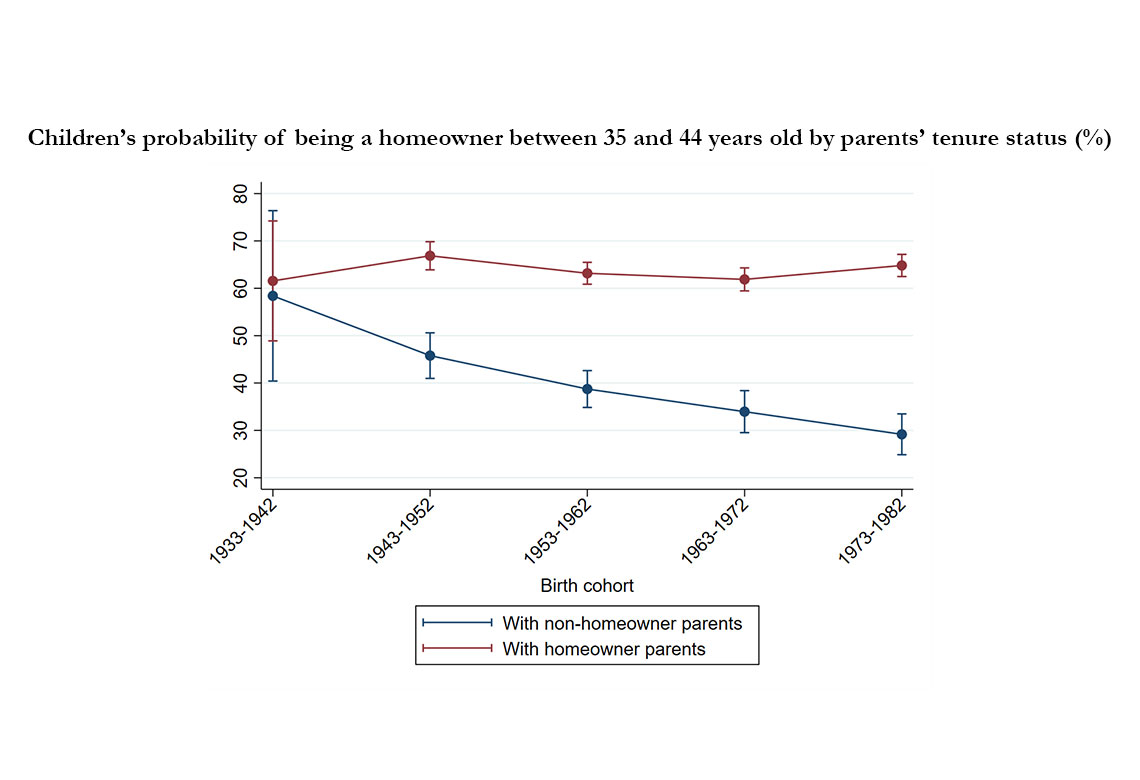 In a global context of rising inequality in many developed countries, social mobility is a crucial issue. A rising correlation in the homeownership status of parents and their children, and more broadly, between the income and wealth of two generations may be viewed as a threat to social mobility and is therefore of primary interest from a policy standpoint. Homeownership plays a crucial role in personal wealth accumulation behavior as well as in the design of public policies in many countries, including France. However, recent studies have shown that the homeownership rate is declining for younger generations compared to older ones at the same age. Such a pattern may be viewed as an obstacle to upward social mobility for younger cohorts. Indeed, at the macro level, housing assets account for a large share of household wealth. Moreover, in many developed countries being a homeowner typically means being wealthier than renters, since it reflects a higher position in the wealth distribution (see the companion paper Garbinti and Savignac (2020)).

There are many reasons why people may benefit from becoming a homeowner. First, it is seen as a way to be insured against negative income shocks due to illness, unemployment or retirement, or to hedge against inflation or against increases in house prices. Second, the empirical literature highlights the positive externalities associated with the homeownership status, with children who grew up in owner-occupied homes typically achieving higher educational attainment or having better cognitive and behavioral outcomes. Third, for many families it can be perceived as a symbol of social success and family stability. Becoming a homeowner has been put forward as a key stepping stone to achieving the American Dream.

This paper studies the evolution of the intergenerational correlation in housing tenure status in France. It relies on cohorts covering a large part of the 20th century. We provide new insights on the evolution of this correlation across children cohorts born from 1933 to 1992. Based on the French Wealth Survey (Insee), we study the homeownership status of the second generation for various age categories, which provides an insight on the persistence of the intergenerational correlation over the life-cycle of the different cohorts. More precisely, we estimate the intergenerational correlation in tenure status at the family level. We use the information provided by the survey respondent (both for the household reference person and his/her partner - if any) regarding the asset holdings of the parents when she/he was 14 years old. We document four main results.