Banque de France Bulletin no. 232: Article 2 Lessons from the 90th Anniversary of the Bank for International Settlements. How to remain central in a changing environment

A bold creation and the first international financial institution, the Bank for International Settlements (BIS) was originally responsible for settling financial disputes arising from World War I. It managed to survive its outdated initial mission, thereby providing a number of lessons for the international financial community. Through far-reaching changes in its missions as well as its governance and shareholding structure, it has adapted to the world’s economic, financial, technological and geopolitical developments, and today occupies an important and unique place in the international financial architecture, alongside political authorities. On the occasion of its 90th anniversary, it is interesting to look back over its history, which reflects world economic history, and the issues and challenges it faces today, from the economic response to the Covid-19 pandemic to the development of public policies addressing the major climate, technological, digital, monetary and financial issues of tomorrow’s world. 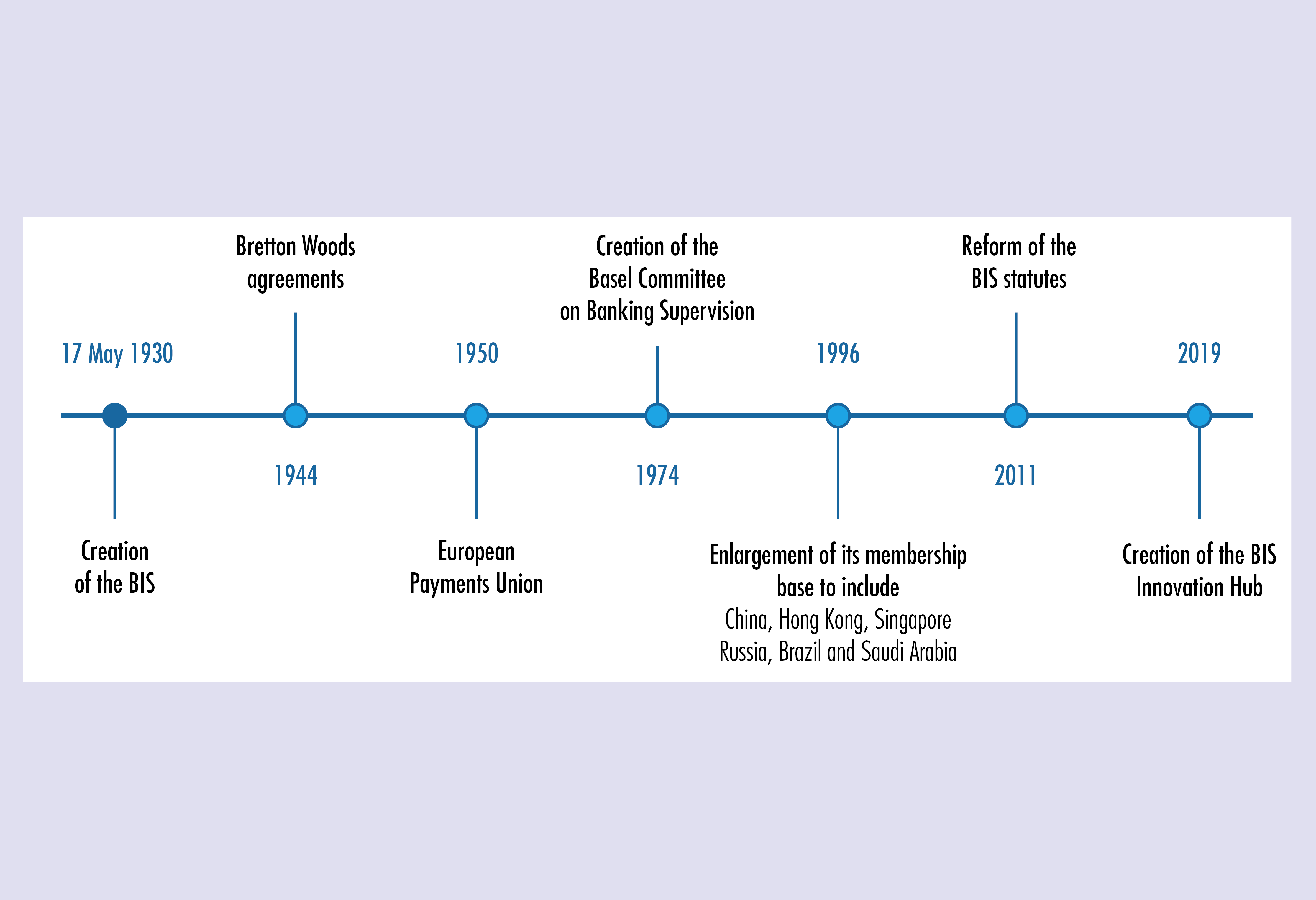 Ninety years ago, on 17 May 1930, the Bank for International Settlements (BIS), the first international financial institution responsible for settling financial disputes arising from World War I, was founded in Basel. While the institution has evolved, both in its missions and its governance, in line with economic, financial, technological and geopolitical changes in the world, its permanence and the place it now occupies in the international financial architecture provide useful lessons for the international community. How has it managed to remain a key player in a changing environment and to establish its own legitimacy in the coordination of public policies in the monetary and financial spheres?

The BIS is first and foremost a pioneer. While the Bretton Woods agreements of 1944 are commonly remembered as the foundation of institutionalized economic multilateralism, the BIS not only predates them by more than a decade, but was also established in the early 1930s in the aftermath of both World War I and the stock market crash of October 1929. Paradoxically, it was in a period often marked by protectionist, or even nationalistic tendencies, and hardly conducive to multilateralism, that a new international economic cooperation was embodied in the Basel institution. Established to facilitate the payment of international war reparations, it was created by the central bankers of the victorious and defeated countries, at the behest of their governments, which were the respective creditors and debtors of the large war debt agreed under the Treaty of Versailles. From the outset, it has differed from other international institutions, such as the League of Nations, in terms of its legal status, i.e. a joint-stock company whose shareholders are central banks as well as – until 2001 – private individuals, and in terms of its operational and financial independence, since the Bank is not linked to political power and covers its expenses alone by generating profits from portfolio management activities. For instance, as at 31 March 2019, the BIS was managing more than 291 billion in assets denominated in Special Drawing Rights (SDRs) on behalf of third parties and for its own account (see extract below from the BIS Annual Report 2018/2019).

2 After World War II, the very existence of the BIS was threatened

At the end of World War II, after fifteen years of operation, a third of which during a conflict that did not interrupt the meetings between central bankers, …

publication
Banque de France Bulletin no. 232: Lessons from the 90th Anniversary of the Bank for International Settlements. How to remain central in a changing environment
Download (EN)