Since Gabaix (2011), the role of changes in the performance of some very large firms in shaping aggregate outcomes has been intensively studied in the economic literature. Changes in the performance of a few large firms can arise due to idiosyncratic shocks or idiosyncratic reactions to common shocks. This paper provides direct evidence for the second channel using data on the universe of French firm-level exports and imports over 1993-2020. Granularity matters for the micro-dynamics of aggregate French exports over the long run: the granular residual explains 42% of the variance in aggregate export growth during the period. Moreover, it co-moves with the macro shocks: the largest firms do better than average in good times and worse in bad times. Studying firm-level performance during the Great Financial Crisis and the Pandemic reveals that top exporters contributed to the export collapses disproportionably more than their pre-crisis share of exports, even within finely defined markets. We investigate the reasons for such over-reaction of the top exporters using the Pandemic as a natural experiment. We find that a higher elasticity to demand shocks explains the larger reaction of top exporters to the Pandemic, with GVC exposure having weak explanatory power. Our findings have macro implications, as they help understand the macro reaction to foreign shocks, and micro implications, since they can inform micro models of exports. 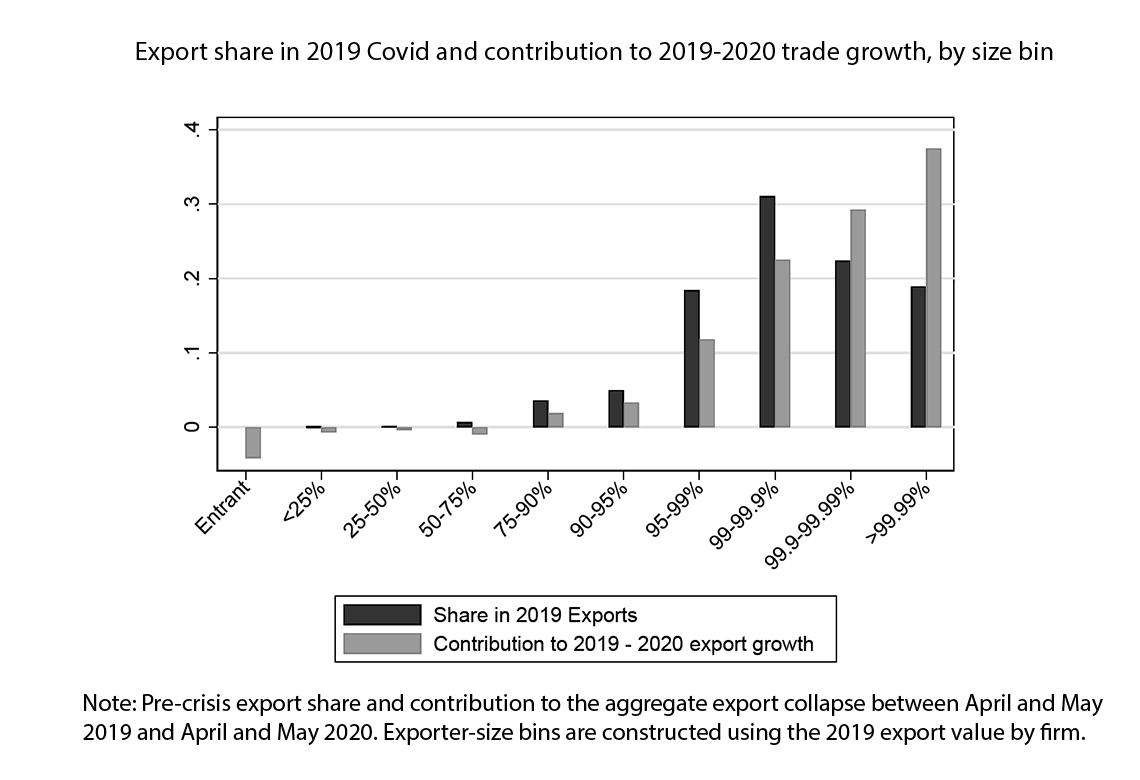 Changes in the performance of some very large firms matter for aggregate outcomes in granular economies. The “micro to macro” approach, linking micro behaviour to macro outcomes, has considerably advanced our understanding of macro aggregates such as business cycles, comparative advantage, and the international transmission of shocks.

Since changes in the performance of these large firms matter for the macroeconomy, it is paramount to understand their roots. Why do large firms perform differently than the smaller ones? While the literature has focused on the role of idiosyncratic shocks, a complementary view poses that large firms have differential reactions to common shocks affecting all firms. This approach posits that macro shocks lead to heterogeneous reactions, in particular by the largest firms, which in turn determine the macro reaction to the initial shock: i.e. from macro to micro, and back to macro. We analyse the contribution of the largest exporters to aggregate export fluctuations over a long period, spanning 1993-2020. We rely on the universe of detailed firm-level export data collected by the French Customs office, containing export values by destination country at a finely-defined product codes and, crucially, available at a monthly frequency.

The overreaction of large exporters to macro shocks is sizeable and clearly seen in the case of the two largest macro global shocks of the past decades: the Global Financial Crisis and the Pandemic. Not only are the two export collapses almost entirely explained by the intensive margin (firms that continue to export), but they were also caused by the largest exporters, whose export growth rates were significantly lower than those of the average exporter.

We zoom in the export collapse of April and May 2020 in Figure below. Given the large concentration of exports, we choose particularly fine bins at the top of the distribution. For instance, the top 1% (roughly 1,000 firms out of 100,000) account for over 70% of total exports. The black bars show the share of aggregate exports in April and May 2019 accounted for by each size bin. We then compare the pre-crisis export share of each bin with its contribution to the aggregate export collapse between April and May 2019 and April and May 2020, measured as the change in total exports of a bin divided by the change in aggregate exports. If all firms grew at the same rate, the contribution of each bin would equal its pre-crisis share. The figure shows that the small group of “Superstar” exporters disproportionately explains the slump in exports. Within the top 0.1%, the 10 largest exporters alone account for around one third of the export collapse, while they exported 19% of the total pre-crisis values. Such negative relationship between pre-crisis size and export adjustment to the crisis holds also within the set of 1,000 larger exporters.

Large firms are more likely to be more engaged in complex GVCs. While the data reveals that larger exporters tend to be more heavily engaged in GVCs than smaller ones, adding GVC measures to our regressions does not affect the magnitude and significance of the exporter size-bin dummies. In other words, large exporters overreaction was not due to their deep engagement in GVCs. On the contrary, we do find convincing evidence of a demand channel, which is not driven by the sector or destination composition of exporters. Instead, we estimate a larger elasticity of large firms to destination-country lock-downs.