According to the Banque de France’s projections, finalised at the end of May, French GDP growth should remain robust in 2018, coming out at 1.8%. It is then expected to ease slightly to 1.7% in 2019 and to 1.6% in 2020, but will still remain above current estimates for potential growth. As a result, the output gap is expected to close in 2019.

After the soft patch seen at the st art of 2018, GDP growth should stabilise at a quarterly rate of around 0.4% and its composition is expected to be balanced. Household consumption should be penalized temporarily in 2018 by the rise in oil prices, but should then rebound as of 2019, driven by renewed gains in purchasing power. Investment growth is expected to moderate but should still outpace GDP growth. Exports are projected to remain dynamic, buoyed by robust global demand, and net trade is expected to make a neutral contribution to growth over the projection horizon.

Inflation as measured by the Harmonised Index of Consumer Prices (HICP) should strengthen temporarily to an annual average of 2.0% in 2018, driven by sharp growth in energy prices and by hikes in tobacco and fuel taxes, but is then expected to fall back to 1.5% in 2019. In 2020, it is projected to reach 1.8%, buoyed by steady growth in inflation excluding energy and food, as further declines in unemployment lead to higher wage growth. 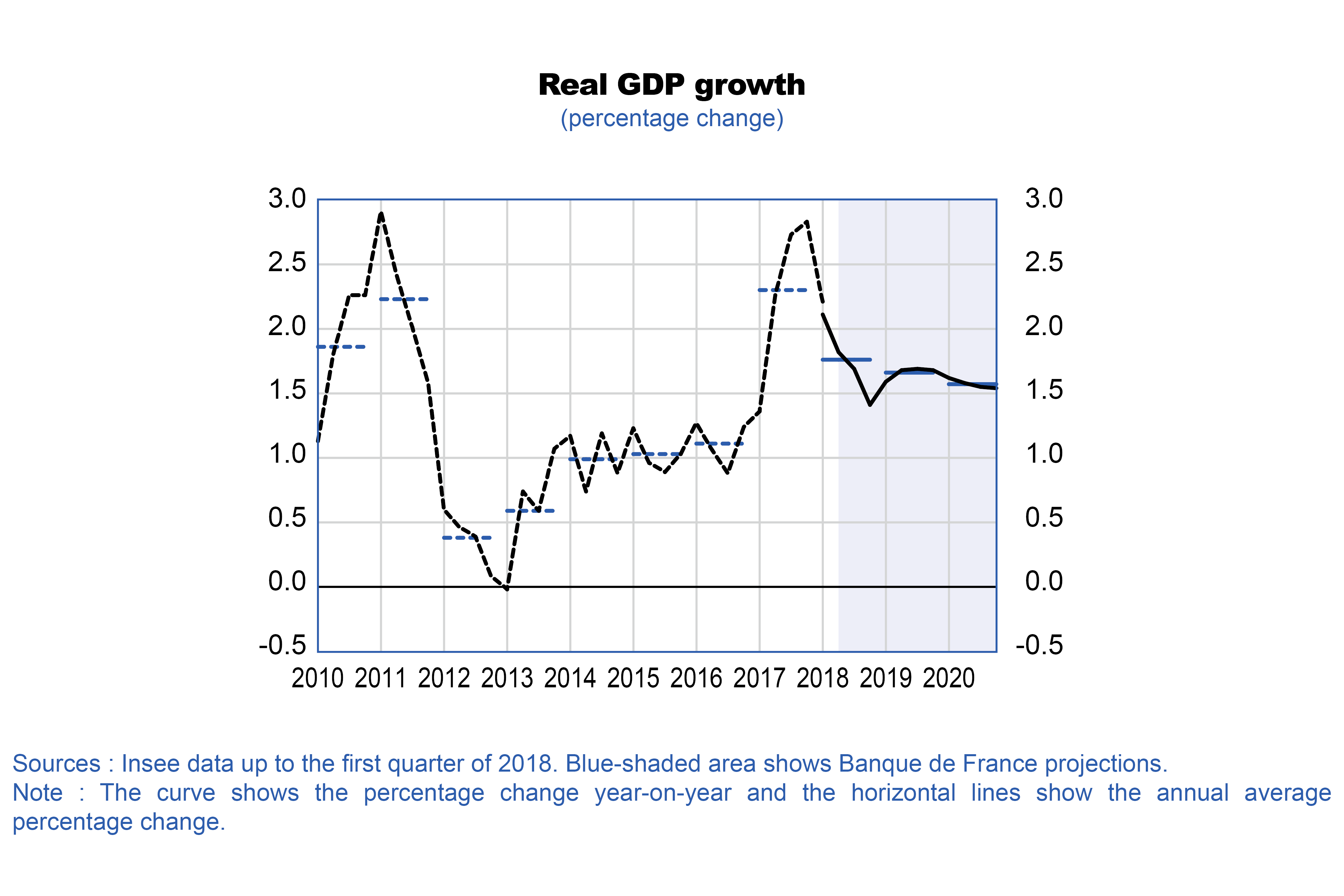 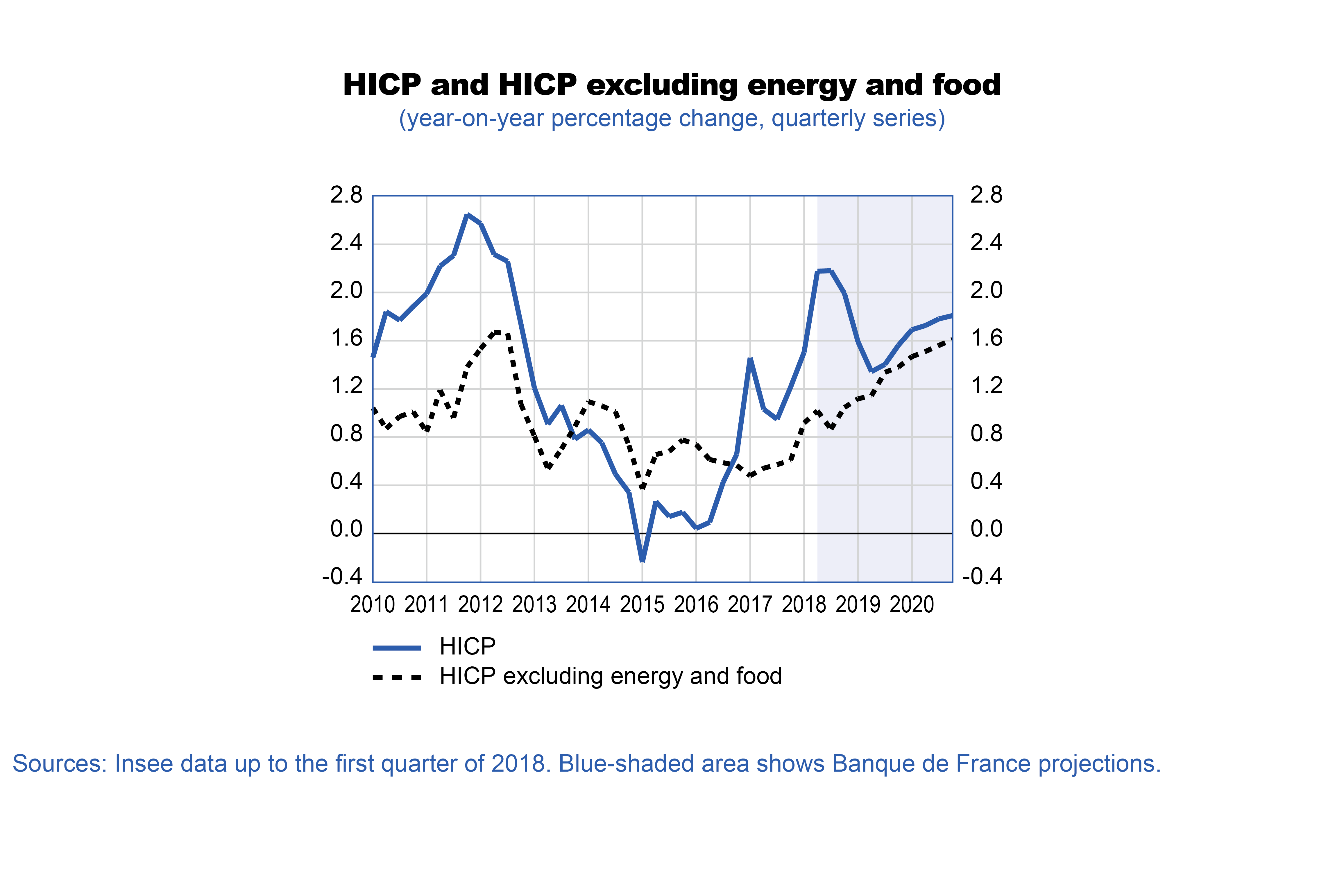 French growth should remain robust over the next few years, albeit below its 2017 peak

As of mid‑2018, economic activity should grow at an annual average rate of close to 1.6%, which is lower than the very high rate observed in 2017 (see Chart 1). Growth went through a  temporary soft patch in the first quarter of 2018, a payback following the strong performance in 2017, and this slowdown is expected to continue over the second quarter of 2018 (quarterly growth of 0.3% according to the Banque de France’s short‑term projections). For the rest of the projection horizon, French GDP should expand at a quarterly rate of around 0.4%. In annual average terms, it should thus rise by 1.8% in 2018, 1.7% in 2019 and 1.6% in 2020, thereby outstripping the rates of growth seen before 2013. Growth is expected to remain above potential over the projection horizon, leading to a marked decline in the unemployment rate (see below).

These Banque de France June 2018 projections were finalised at the end of May and are based on the quarterly national accounts published on 27 April 2018. They do not take into account the rebased quarterly national accounts published by Insee on 30 May 2018, which have 2014 as a base year. In these latter accounts, the GDP growth estimate for 2017 was notably revised upwards from 2.0% to 2.3% (working‑day adjusted) but the carry‑over effect at the end of the first quarter of 2018 was left unchanged (1.2%).

Against this economic backdrop, the government deficit‑to‑GDP ratio should continue to decline in 2018, reaching 2.5% according to our estimates, down from 2.6% in 2017. France should therefore exit the European excessive deficit procedure to which it has been subject since 2009. However, given that our forecast for nominal growth is slightly lower than the government’s (2.7% compared with a government assumption of 3.1%) our deficit projection is slightly higher than that set out in the Stability Programme (2.3% of GDP for 2018). Consequently, although revenues are set to remain robust due to the continuing economic expansion, the government will still need to take steps to restrict spending growth.

These projections are based on the technical assumptions used in the Eurosystem June projection exercise, for which the cut‑off date is 22 May 2018 (see Table A2 in the appendix). In 2018, French economic activity should continue to benefit from the ongoing strength of global demand. However, in 2019 and 2020 global demand should slow to an extent both in the euro area and in the rest of the world. The euro is expected to appreciate in annual average terms in 2018, largely due to the upward trend in the second half of 2017. The price of oil is also projected to increase sharply, rising by EUR 14 per barrel in annual average terms between 2017 and 2018, from EUR 48 to EUR 62. By convention, the exchange rate is then assumed to remain stable in 2019 and 2020, while futures prices suggest oil should become slightly cheaper leading up to 2020. Compared with our previous projections published in March, the oil price shock should have a negative impact on the growth outlook, but this will be offset in part by stronger global demand, and by higher export prices among our international competitors which should make French goods and services more competitive.

By end‑2020, the unemployment rate should be at its lowest level since end‑2008

Employment growth proved very strong in 2017 (net addition of 300,000 jobs). However, it should moderate slightly in 2018 and 2019 owing to the cut in subsidised contracts, although the private sector is expected to see further sizeable employment gains thanks to the strength of economic activity. The French economy is expected to add a net total of close to 200,000 jobs in 2018 and an average of around 180,000 per year thereafter, despite lower GDP growth. This will be fuelled in part by the transformation of the CICE (Tax Credit for Competitiveness and Employment) into a permanent cut in employers’ social charges (see box on employment in the December 2017 projections). As predicted in our March projections, there was a slight uptick in the unemployment rate in the first quarter of 2018 after the exceptionally sharp drop seen at the end of 2017. Despite these short‑term fluctuations, however, the underlying trend is still downwards and this is expected to persist until 2020. The unemployment rate is thus seen falling from 9.2% in the first quarter of 2018 to 8.2% at the end of 2020, reaching its lowest level since the end of 2008 (see Chart 2).

HICP inflation is expected to follow a fluctuating  path, strengthening temporarily in 2018 (to 2.0% after 1.2% in 2017) before falling back in 2019 (1.5%) and then rising again in 2020 (see Chart 3). The upswing in inflation in 2018 will largely be driven by strong energy inflation stemming from the rise in oil prices, as well as by hikes in tobacco and fuel taxes. However, inflation excluding energy and food should also start to recover (1.0% after 0.6% in 2017), as seen already since the start of the year, although the past appreciation of the euro should dampen growth in non‑energy industrial goods prices. Services inflation is also projected to remain fairly weak in 2018, notably due to the cut in social housing rents due to take effect this summer. In 2019, the fall in headline inflation will mask continuing growth in inflation excluding energy and food (1.2% in 2019), linked to lower unemployment and higher wage growth, and to the fading impact of the past euro appreciation. This trend should be confirmed more clearly in 2020, with inflation excluding energy and food strengthening to 1.5% (see box on the longer term outlook for inflation).

The engines of growth should be fairly balanced

After posting only modest growth in 2017, household consumption should remain subdued in 2018, rising by just 1.1% (see Chart 4). Despite the strength of the labour market and the pick‑up in wages, households will be penalised temporarily by sharp growth in energy and tobacco prices, which will reduce gains in purchasing power. However, consumption should gradually accelerate again over the year, and especially when the tax cuts come into effect at the end of 2018 and start of 2019, giving a strong boost to household income (reductions in housing tax and social security contributions). Households should therefore see substantial purchasing power gains in 2019, which could in part fuel a rise in the saving ratio. Consumption is projected to remain dynamic in 2020, buoyed by growth in labour income.

Growth in business investment should gradually ease to a pace more in line with its determinants, following the sharp rises seen in 2016 and 2017. It should nonetheless continue to outpace GDP growth, spurred by strong gains in private sector value added, a continuing low cost of capital and the recovery in corporate profit margins from the low of 2013.

After exceptionally high growth in 2017, household investment is projected to slow significantly in 2018. Recent data on home sales and housing starts suggest this trend should continue until the start of 2019, and from then onwards household investment should row at a pace more in line with purchasing power.

The contribution of net trade is expected to be strongly positive in 2018 thanks to a high carry‑over effect from the final quarter of 2017, but should then turn neutral over the remainder of the projection horizon. Exports should continue to be supported by dynamic global demand, even though the latter should lose momentum gradually up to 2020. However, the effects of the euro appreciation in the second half of 2017 should gradually make themselves felt, causing the contribution of net trade to turn neutral again in 2019 and 2020. Inventories are expected to make a negative contribution in 2018, as a partial counter‑effect to the positive contribution from trade, and due to the carry‑over effect at the end of 2017. They should then make a neutral contribution over the remainder of the projection horizon.

This outlook remains subject to significant upside and downside risks

The risks to our real GDP growth projection appear balanced. The current and upcoming reforms in France could translate into higher potential growth before the end of our projection horizon. Conversely, the current international political situation poses a downward threat. In particular, political uncertainty has increased markedly in Italy, while US trade policy could undermine demand for European, and especially French goods and services, limiting the potential for a rebound in our exports. These downside risks are in part counterbalanced by the potential for an expansionary fiscal policy in certain euro area countries with a fiscal surplus, such as Germany, which has not yet been factored into our projections.

The risks to our inflation projection also appear on the whole balanced. One of the downside risks is the future path of oil prices. We also cannot rule out the possibility of a stronger than expected pass‑through of the past oil price shock to non‑energy prices. Conversely, higher potential growth and lower structural unemployment could delay the rise in inflation excluding energy and food.

More details on the projections and a box on "Trends in French inflation excluding energy and food” are available in the full PDF version.