How effective make-up strategies are depends heavily on how forward-looking agents are. Workhorse monetary models, which are much forward-looking, find them so effective that they run into the so-called “forward-guidance puzzle”. Models that discount the future further find them much less effective, but imply that agents discount the very perception of future policy rates. This only evaluates make-up strategies when financial markets do not notice them, or deem them non-credible. We amend one leading solution to the forward-guidance puzzle -namely Woodford's finite planning horizons -to the assumption that financial markets have rational expectations on policy rates, and incorporate them into the long-term nominal interest rates faced by all. Agents still have a limited ability to foresee the consequences of monetary policy on output and inflation, making the model still immune to the forward-guidance puzzle. First, we find that make-up strategies that compensate for a past deficit of accommodation after an ELB episode have sizably better stabilization properties than inflation targeting. Second, we find that make-up strategies that always respond to past economic conditions, such as average inflation targeting, do too but that their stabilization benefits over IT can be reduced by the existence of the ELB. 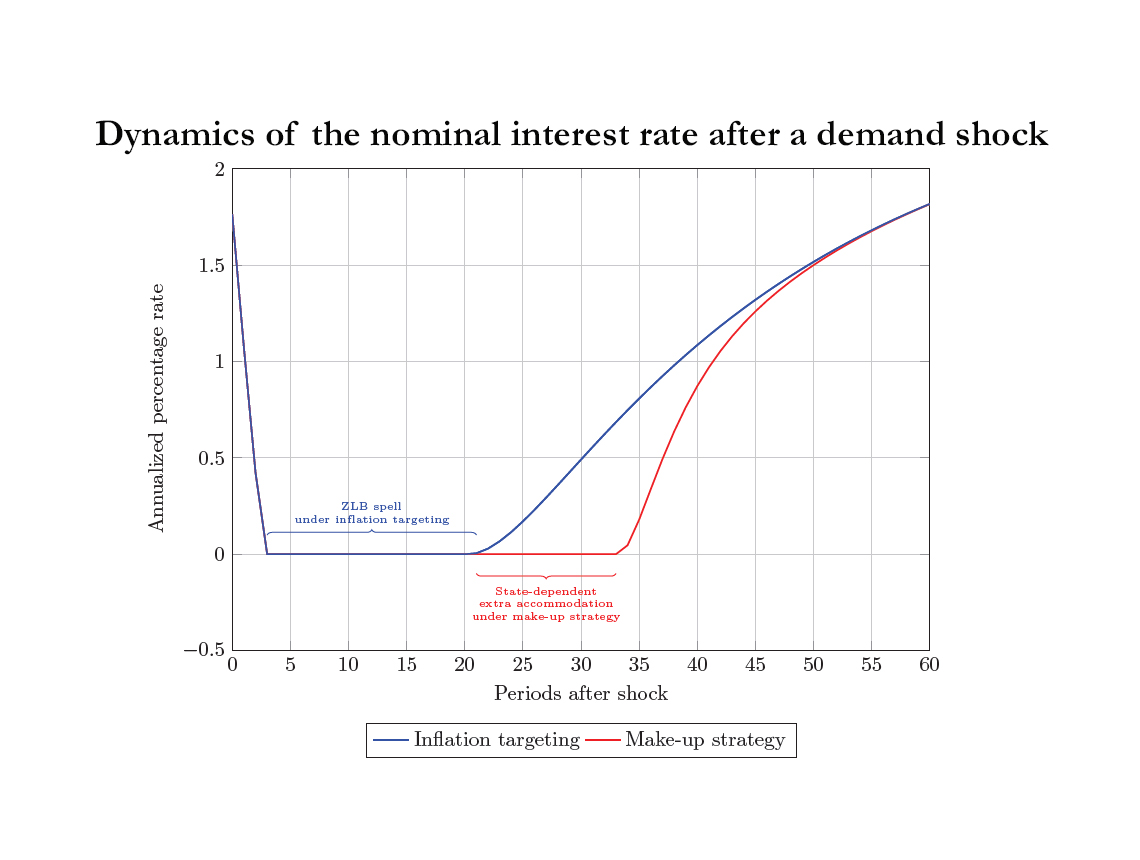 With short-term interest rates stuck at their effective lower bound (ELB) over the last decade, central banks have engaged in policies promising “low-for-long” policy rates, in the form of forward guidance. Recently, the Federal Reserve and the European Central Bank (ECB) have considered whether to make this feature of policy a systematic part of policy by adopting a “make-up” strategy, whereby “they would explicitly commit to make up for inflation misses when they have spent quite some time below their inflation goals” (Lagarde, 2020).

Both forward-guidance and make-up strategies rely critically on economic agents making decisions in a forward-looking manner. In the workhorse New Keynesian (NK) model, which assumes fully forward-looking agents, such policies are highly effective. Even suspiciously so: they result in the “forward guidance puzzle”: The announcement of policy changes in the far future have an unrealistically large effect on current output and inflation.

On the empirical side, how forward-looking private agents are in real life is subject to conflicting evidence. On the one hand, survey evidence of households and firms suggest that they are far from being fully forward-looking. On the other hand, a large body of empirical evidence documents that asset prices are very responsive to news about future economic developments, which requires at least some financial-market participants to be forward-looking—consistent with the strong incentives they face.

We study make-up strategies and forward-guidance in a NK model amended along two dimensions. First, following Woodford (2019), we assume that consumers and firms have finite planning horizons (FPH), a form of bounded rationality. As Woodford shows, finite planning horizons reduce the degree of forward-lookingness of the NK model, providing a solution to the forward-guidance puzzle. Second, we re-introduce the classical assumption that financial markets participants fully take into account future monetary policy in their expectations of future interest rates, and incorporate them into the long-term nominal interest rates faced by all agents. We show that it results in a parsimonious extension of Woodford (2019)’s plain FPH model.

Using this model to evaluate make-up strategies, we reach two main conclusions. First, lower-for-longer policies remain effective even when households and firms have short planning horizons. At the same time, owing to the short planning horizons of households and firms, the model is immune to the forward-guidance puzzle. Second, we find that while systematic make-up strategies have better stabilization properties than inflation targeting (IT), their extra performance over IT can actually be reduced by the presence of the ELB. This contrasts with the case of rational expectations, in which the existence of the ELB strengthens the benefits of average inflation targeting (AIT) over IT because switching to AIT allows to mitigate the extremely large deflationary spirals that occur at the ELB under IT. Our results thus bring nuances to a traditional argument for switching to an AIT strategy, which insist on the constraint posed by the ELB as an important motivation for moving beyond IT.