Working Paper Series no. 754: Market Making and Proprietary Trading in the US Corporate Bond Market

I study broker-dealers' trading activity in the US corporate bond market. I find evidence of broker-dealer market making when customers both buy and sell a bond in a day, which happens half of the time: as predicted by market making theories with adverse selection or inventory costs, prices go down (up) as customers sell (buy). Otherwise, evidence is in favor of proprietary trading as in limits of arbitrage theories: prices go up (down) when customers sell (buy), and dealers buy (sell) bonds that are relatively cheap (expensive). Proprietary trading is reduced after the crisis. Relatedly I show that before the crisis, large broker-dealers borrowed and sold Treasury bonds in amounts similar to their corporate bond holding, but not after. I give suggestive evidence that they were subject to a severe tightening of their margin constraints as early as July 2007, in particular following increased Treasury bond volatility. 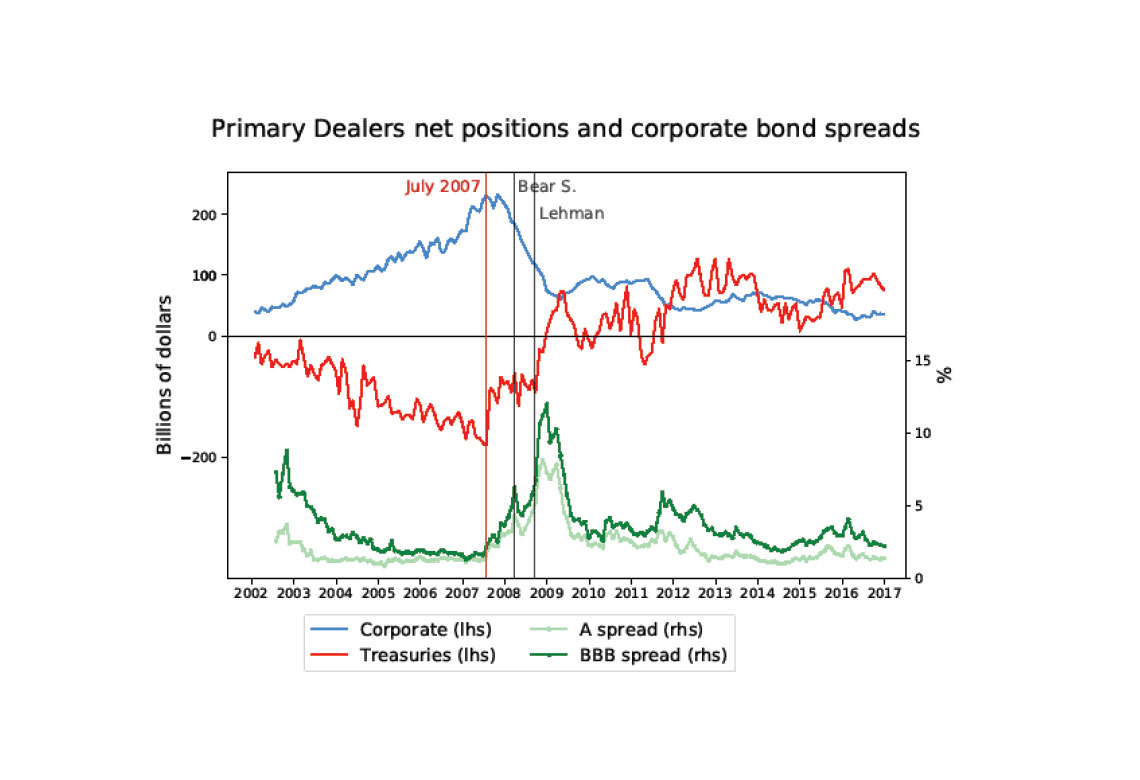 Large banking groups generally have substantial activity in financial markets, through dealer subsidiaries in the US. These activities have caused concern during the 2007-2009 financial crisis. What these financial institutions do is subject to controversy. Proponents of US post-crisis regulation, and some macro-finance academic papers argue that they have trading strategies (“proprietary trading”) that led to the crisis. However evidence on the underlying strategies remains loose, beyond the fact that they involve leverage. Others argue that dealers simply provide a liquidity service to investors: buying from those eager to sell and conversely. Thus, they argue, prudential regulation impairs liquidity provision, decrease asset prices and decrease corporate investment.

In this paper I reconcile the two views in the US corporate bond market: dealers trade like hedge funds: this means they find that some bonds a trade at too low prices with respect to other bonds, even after taking default risk or maturity into account. Thus they buy the “cheaper” one and borrow and sell, i.e. they short-sell the more expensive. This activity implies leverage: buying a bond implies borrowing cash, and short-selling implies borrowing a bond. It also tends to compress cheap bonds’ risk premia, as dealers buy more of them. This activity can also be viewed, if properly done, as liquidity provision: if a bond trades at low price, it may be because investors are eager to sell it, and conversely. It may also reflect gambling, if existing price differentials are fully justified by credit risk or maturity. The question of whether dealer trading is liquidity provision or gambling is important, but requires appropriate credit risk measurement: this is beyond the scope of this paper.

I also suggest that the Volcker rule, which bans bank-affiliated dealers’ proprietary trading, may not address important risks related to proprietary trading: financing constraints (capital requirements, repo haircuts, …) may bind before the trading strategies pay off, forcing premature liquidation of positions. The Volcker rule answered the concern that banks took excessive trading risk because they were too-big-to-fail, implying their trading losses would be borne not by bankers, but by taxpayers.

This overall suggests that the underlying problem with proprietary trading stems from short-term capital requirements, which has two implications: first, the problem is likely to arise even outside the banking sector, as in the LTCM crisis in 1998; and second, other instruments for public intervention, ex ante or ex post, may be needed..