Working Paper Series no. 833: The Meaning of MMT

In the last few years in the U.S. and especially since the publication of Stephanie Kelton’s book, The Deficit Myth (Kelton, 2020) in Europe, the so-called Modern Monetary Theory (MMT) has been gaining prominence in the media and the public. This paper exposes the main proposals of MMT in the light of their doctrinal sources, also confronting them with economic facts and with other currents of economic thought. The first part deals with the approach to money and monetary policy developed by MMT, the second part with its recommendations regarding fiscal policy and aggregate demand management, the third part with the structural policies it advocates, the fourth part with the international aspects of MMT. The fifth part concludes. Overall, it appears that MMT is based on an outdated approach to economics and that the meaning of MMT is a more that of a political manifesto than of a genuine economic theory. 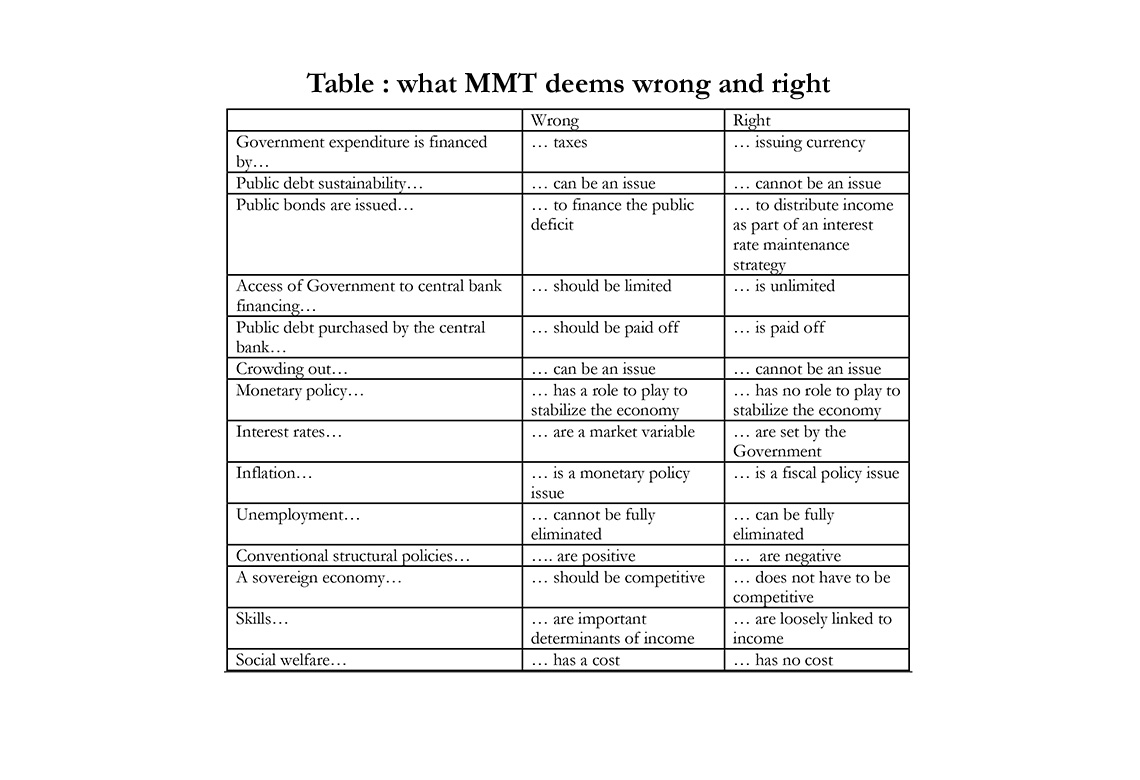 This paper exposes the main proposals of the so-called Modern Monetary Theory (MMT) in the light of their doctrinal sources, also confronting them with economic facts and with other currents of economic thought.
Georg Friedrich Knapp’s State Theory of Money (Knapp, 1905) – hereafter STM – provides the main theoretical underpinning of MMT’s approach to money: money is a creature of the law; it is a means of payment; it is a token, a representation. The STM was received very mildly. Reviewers noted that the STM says nothing about the value of money and lacks correspondence with historical facts. Although this is not explicitly stated by MMT economists, they consider money as a pure asset that the state can create at will, whereas it is both an asset and a liability in the STM. In that regard, MMT represents a regression vis-à-vis the STM. Regarding money, MMT makes a confusion between legal (or fiat) currency (i.e. the euro or the dollar) and cash and does not signal the reason modern literature on money puts forward what makes legal currency “acceptable” by the public, i.e. monetary policy credibility. Moreover, MMT does not provide an explanation of monetary policy strategy or a description of the monetary transmission mechanism from monetary policy decisions to the broader economy. Instead, it considers that law should set the objectives of monetary policy and focuses on one specific aspect of monetary policy implementation, liquidity management by the central bank, conveying the false message that it is conducted under the instructions of the Treasury. Hence, MMT views the central bank as “the government’s fiscal agent” and central bank independence as “a myth”. We highlight that both historical precedents and an attempt to measure the impact of the MMT program in the U.S. through public debt monetisation provide strong cautionary tales against such an approach.
Lerner’s Functional Finance Theory (1943) – hereafter FFT – provides the fundamental building block for MMT’s fiscal doctrine. FFT is referred to as “functional” because its focus is on the macroeconomic outcome of fiscal policy rather than on its budgetary impact. Stigler’s comment according to which FFT has “an attractive simplicity” that is “purchased at the high price of avoiding real problems” nicely sums up reactions to FFT. MMT’s fiscal policy doctrine builds on FFT’s dismissal of debt constraints on government borrowing, arguing that a sovereign currency issuer is financially unconstrained. Moreover, MMTers believe that fiscal policy is much more effective than monetary policy at managing aggregate demand. A major criticism is that MMT is unable to prove its claims given the lack of formal modelling. MMT also argues that there is no relation between fiscal deficits and interest rates or between fiscal deficits and inflation. In fact, the shift to a MMT fiscal policy regime would obviously generate these relationships via the impact of changed expectations on financial markets. MMT proposes to complement fine-tuning fiscal policies with structural programs aiming at a directly controlling the allocation of resources. Full employment would be achieved through a Public Service Employment program, which would act as an automatic stabiliser, and by large-scale spending on infrastructure, climate change, and the environment, dubbed the “Green New Deal”. We show that these proposals reflect MMT’s view that private indebtedness is supposed to be conducive to financial fragility while a government led expansion would enhance financial stability by providing safe assets and income to the private sector.
Finally, external policies are MMT’s “benign neglect”.

The table above summarizes the main contrasts between MMT’s approach and mainstream economics.