Working Paper Series no. 703: Money and Capital in a Persistent Liquidity Trap

In this paper we analyze the implications of a persistent liquidity trap in a monetary model with asset scarcity. We show that a liquidity trap may lead to an increase in real cash holdings and be associated with a decline in output in the medium term. This medium-term impact is a supply-side effect that may arise when agents are heterogeneous. It occurs in particular with a persistent deleveraging shock, leading investors to hold cash yielding a low return. Policy implications differ from shorter-run analyses implied by nominal rigidities. Quantitative easing leads to a deeper liquidity trap. Exiting the trap by increasing expected inflation or applying negative interest rates does not solve the asset scarcity problem. 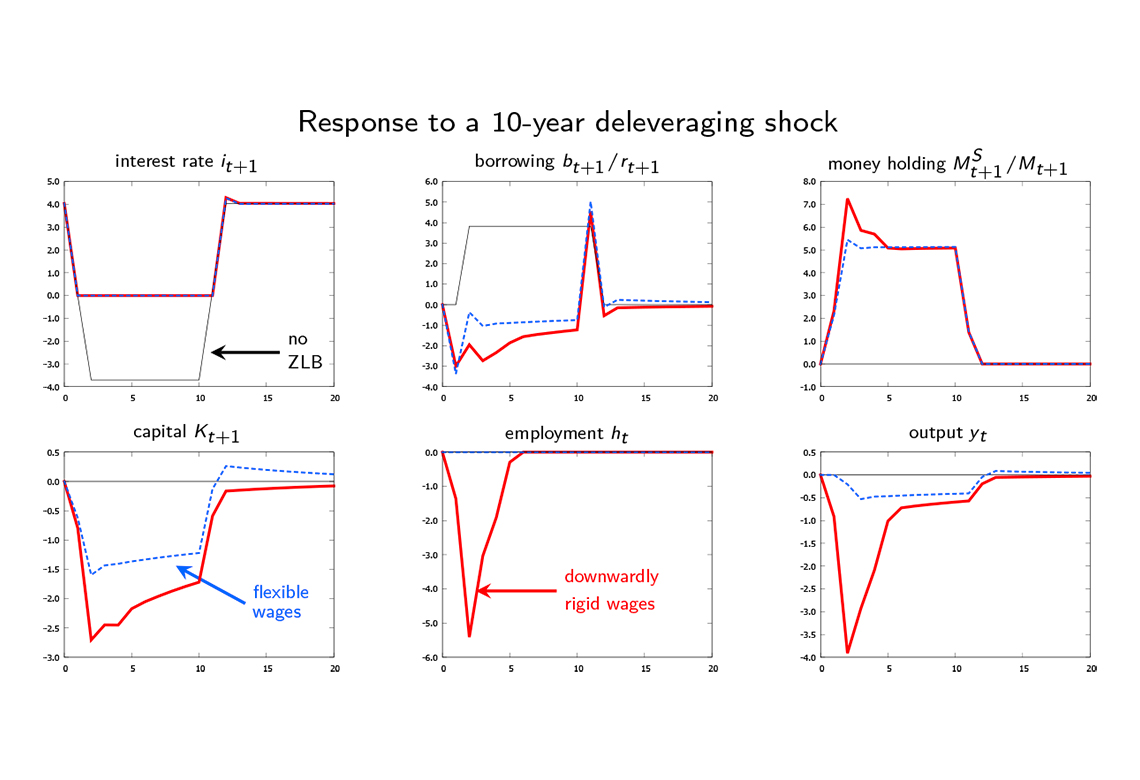 In recent years, several advanced economies have experienced near zero nominal interest rates for extended periods of time–a situation known as a liquidity trap. The United States, for instance, had close to zero interest rates from 2008 to 2015 while Japan has been in a liquidity trap since 1999. These episodes are long-lasting compared to usual business cycle frequencies. They are associated with substantial increases in real cash holdings by the non-financial private sector and with disappointing levels of investment and output growth.

Previous research has explained how the lack of demand can depress output when the nominal interest rate is stuck at the zero lower bound (ZLB) after a large negative shock. But given the length of these episodes, it is likely that supply-side determinants become important in the medium run as the economy gradually recovers from the initial demand shock. In this paper, we identify a supply-side mechanism that may contribute to a slower recovery in a persistent liquidity trap. When the interest rate is stuck at zero, the desire of private investors to deleverage can lead them to hold large real money balances in the aggregate. Because cash has a low return, this can decrease their capacity to invest and have an adverse effect on output.

We study a model of heterogeneous investors where assets are scarce. Investors need to save before they have an investment opportunity. In normal times their saving is channeled towards borrowing by investors who need to invest. In a deleveraging process, the supply of bonds by borrowers shrinks while the demand for saving instruments increases. The equilibrium response is a lower interest rate. This stimulates borrowing and sustains investment and output. This is illustrated by the thin black line in the figure below, which displays the response to a 10 year deleveraging shock in an economy without a ZLB. In the example displayed, the lower interest rate is able to fully insulate capital and output from the effects of deleveraging.

Deleveraging has a very different impact when the economy hits the ZLB. This situation is represented by the dashed blue line, in the extreme case where nominal wages are infinitely flexible. When the interest rate cannot adjust downward, private borrowing is no longer able to accommodate the demand for saving instruments. Instead, investors start holding money in addition to bonds. But the low return of cash in the aggregate portfolio of investors decreases their income and their capacity to invest. This hurts output in the medium run.

This new supply-side channel is complementary to the usual demand-side channels analyzed by previous research, which are important in the short run but subside in the medium run. In our model, the higher demand for cash by investors triggers deflationary forces. If nominal wages are slow to adjust, a situation represented by the solid red line, these forces lead to a substantial drop in employment and output. However, as nominal prices and wages gradually adjust, the economy recovers and converges back to the flexible wage economy where output is only limited by the supply side channel.

The model has different policy implications than short-run analyses. Monetary transfers to private agents are very effective in mitigating short run demand-side effects of deleveraging shocks but cannot address their supply-side effects on capital accumulation. A higher inflation target or negative interest rates can help exit liquidity traps but do not solve the asset scarcity problem. An increase in public debt can also help exit the liquidity trap since it provides the needed saving instruments, but it may lower the capital stock because of higher interest rates. Purchases of bonds financed by money creation, a policy know as quantitative easing, can postpone the exit from a liquidity trap by further decreasing the supply of assets available to the private sector.