Working Paper Series no. 611: National natural rates of interest and the single monetary policy in the Euro Area

We estimate time-varying national natural real rates of interest (r*) for the four largest economies of the euro area over 1999-2016. We further derive the associated national real interest rate gaps, which gauge the perceived monetary policy stance in each country. We find that the average r* have been lower after 2008. Furthermore, national r* were significantly negative in Southern countries during the sovereign crisis. As their effective real rates soared, national rate gaps across the euro area diverged. However, a common policy stance has been restored since 2014 as the ECB’s unconventional programs gathered pace. 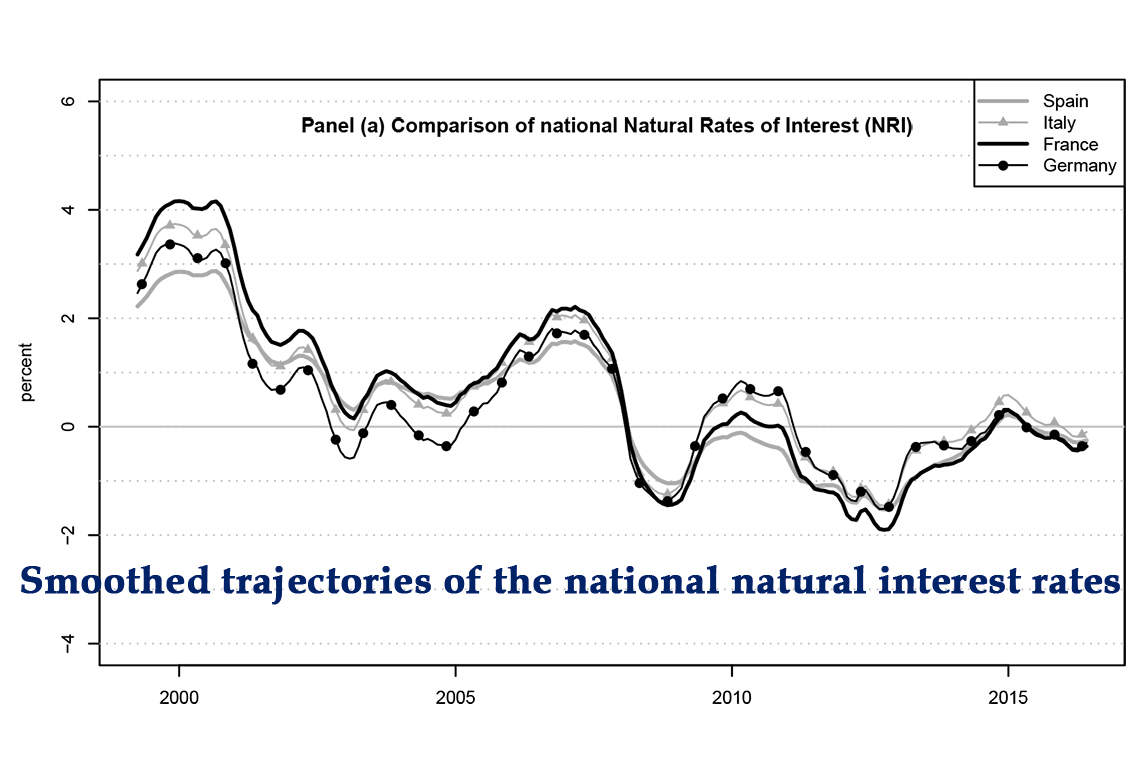 The persistence of low growth and low long-term real interest rates in major developed economies in the aftermath of the Great Recession has prompted a vivid debate about a possible downward shift in the level of the equilibrium, or ``natural'' real rate of interest. The natural rate of interest, often denoted by r*, is conceptually an important benchmark for monetary policy. It is commonly understood as the level of the medium-run real rate that equates investment and savings. Theories in support of a declining r* have therefore pointed to the role of a series of possible factors, either structural or of more temporary nature, which may have exacerbated a situation of excess savings over the last decade. Some of these factors are likely to have a differentiated impact across the national economies in the euro area, thus potentially driving national natural rates apart. Diverging natural rates of interest across major economies of a monetary union would however represent a major threat for the conduct and efficiency of a common monetary policy. Despite the importance of this issue within the euro area, to date, measures of the national natural rate of interest in Member countries are still lacking.

We define here the natural rate as the (one-year) real rate of interest which is consistent with output being at its potential once the effects of transitory demand and supply shocks have dissipated. Having in mind that any difference between output and its potential - i.e., the output gap - will impinge sooner or later on inflation, this is tantamount to defining the natural rate as the real rate consistent with stable inflation in the medium-run, a definition that obviously echoes the operational objective of many central banks today. As soon as the natural rate of interest moves, reflecting the influence of technology, time preference or other real exogenous shocks, there is then a clear case for a stability-oriented monetary policy to try and track its fluctuations (see, e.g., Barsky et al., 2014).

We estimate time-varying national natural rates of interest for each of the four largest economies of the euro area - France, Germany, Italy and Spain - since the inception of the euro in 1999. We filter these unobserved variables conditionally on a joint stylized model of these four economies and their interactions. We first find evidence of a common declining trend of the four national r* over the last fifteen years. With the exception of a few short-lived episodes, the latest one being during the post-Lehman recession, differences in national r* across countries remained relatively contained and generally below one percentage point. However, actual short-term (one year) real interest rates diverged markedly during the euro area sovereign crisis, reflecting the surge in the sovereign credit spreads of Southern countries.  We then compute country-specific measures of the real interest rate gap, the difference between the local ex ante real rate and the estimated national natural rate. According to this metric, the single monetary policy failed to be unique across member countries over several episodes, most notably at the climax of the euro area crisis. While ensuring a neutral stance vis-à-vis core economies, it proved strongly dis-inflationary in Spain and Italy from mid-2011 to the end of 2012.  Eventually, all four national real interest rate gaps converged to roughly -1% over the years 2014-2016, witnessing a more consistent, expansionary single policy stance across the area, as the Eurosystem embarked more decisively on unconventional programs.