Working Paper Series no. 846: News from the Frontier: Increased Productivity Dispersion across Firms and Factor Reallocation

Analysing French firms over 1991-2016, we find first that since the beginning of the century, one or two downward significant productivity breaks have occurred in all industries, both at the frontier and for laggard firms, suggesting a decline in the contribution of technological progress to productivity growth. Second, the median labour share is always higher for the laggard firms than for the frontier firms, with a sharp decrease from the mid-1990s to 2008, and an increase from 2008 onwards. Third, factor reallocation decreased significantly in the 2000s, at the time when we observed an increase in productivity dispersion, with a growing productivity gap between frontier and laggard firms. It appears also that reallocation has been lower on average over the whole period for sectors with a high import share, which can be related to the impact of global value chains. 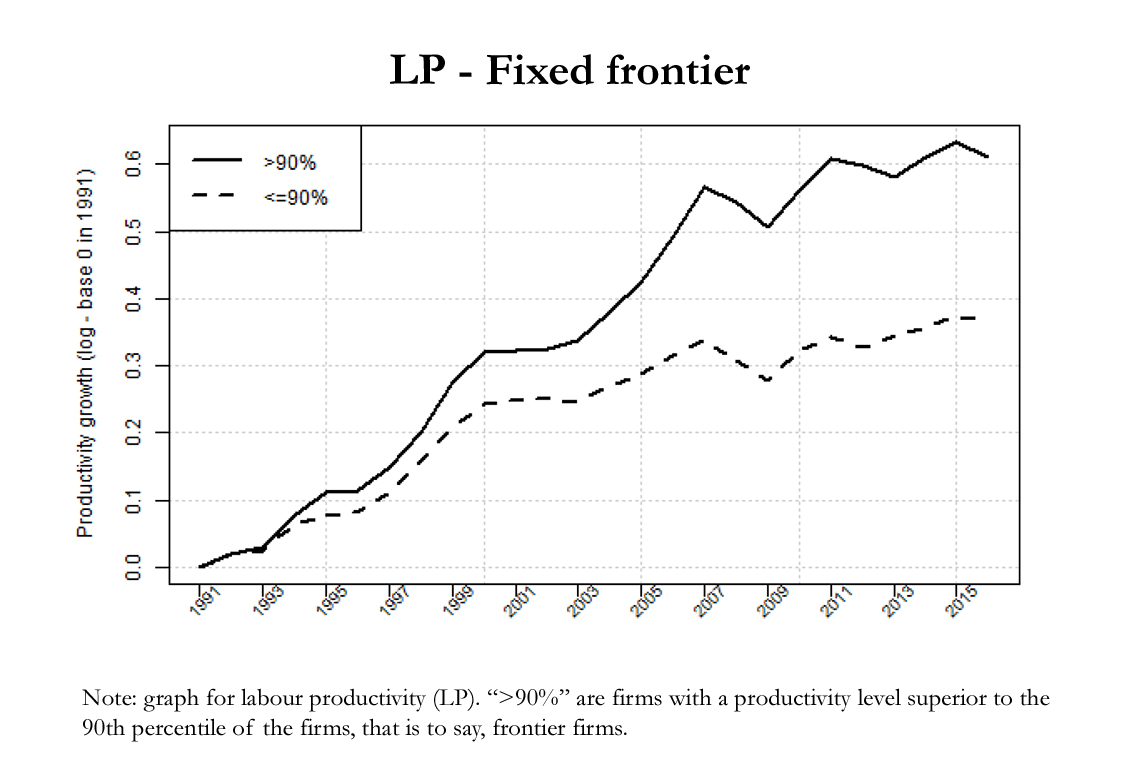 The productivity slowdown observed in most advanced economies since the 2000s has led to a historically low productivity momentum, questioning the future of growth and many of the features of their economic and social models. The economic literature has increasingly focused its attention on firm-level explanations of this slowdown and on the impact of the ongoing technological revolution. Several hypotheses have been put forward to explain this slowdown. One explanation is that it has resulted from a slowdown at the productivity frontier, which would suggest a decline in the contribution of technological progress to productivity growth. Another is that it has resulted from a misallocation of production factors, associated with a growing productivity dispersion among firms and a growing productivity gap between firms at the frontier and laggard firms.

In this paper, we have observed similar stylised facts on the French economy and on the global economy, in particular a growing dispersion of the productivity distribution, both for synthetic dispersion indicators (see Cette et al., 2017 and 2018) and between frontier and laggard firms (cf. graph below) using the FiBEN database covering all French companies whose annual turnover exceeds EUR 750,000 or which hold more than EUR 380,000 in bank loans.

Among the hypotheses put forward to explain the slowdown, Gordon’s lower contribution of technological progress cannot be discarded: we observe breaks in productivity trends in many sectors before 2008, pointing to the technological explanation rather than to the consequences of the financial crisis; moreover, econometric estimates show significant productivity breaks in all industries, both at the frontier and for laggard firms.

However, we also estimate a significant decline in labour reallocation at the start of the 2000s, at the time when we have observed an increase in productivity dispersion, with a growing productivity gap between frontier and laggard firms. The explanation based on specific ICT characteristics is not fully confirmed in the French case. On the one hand, the labour share at the frontier decreased sharply (by more than ten percentage points) from the mid-1990s to 2008 and the firm renewal rate at the frontier was on a downtrend before 2008. These two stylised facts suggest that, before the crisis, frontier firms increased their productive edge over laggards firms, were less and less obliged to compete with the other firms and were then able to increase their margin rate. On the other hand, since 2008, the median labour share has risen, offsetting about half of the previous decrease, and the firm renewal rate at the frontier has been structurally significant, with a minimum of a third of the firms leaving the frontier each year.

On the contrary, increased dispersion and lower reallocation efficiency may be consistent with a decrease in financial constraints and real interest rates, as described by Aghion et al. (2019). It also appears that reallocation has been significantly lower on average over the whole period for sectors with a high ICT share. The combination of a rise in the share of ICT sectors and lower reallocation efficiency in these sectors may explain both the increased dispersion in productivity and its overall slowdown.