Working Paper Series no. 780: No Firm Is an Island? How Industry Conditions Shape Firms’ Expectations

We study how firms’ expectations and actions are affected by both aggregate and industry-specific conditions using a survey of French manufacturing firms. We document an important new stylized fact. In response to industry-level shocks that have no aggregate effects, firms’ aggregate expectations respond persistently. This is consistent with “island” models in which firms use the local prices they observe to make inferences about broader aggregate conditions. We then assess the extent to which these patterns are related to observable characteristics of firms and the industries in which they reside. Finally, we extend the analysis to firms’ expectations over their own future price changes and document how these respond to both industry and aggregate variation. 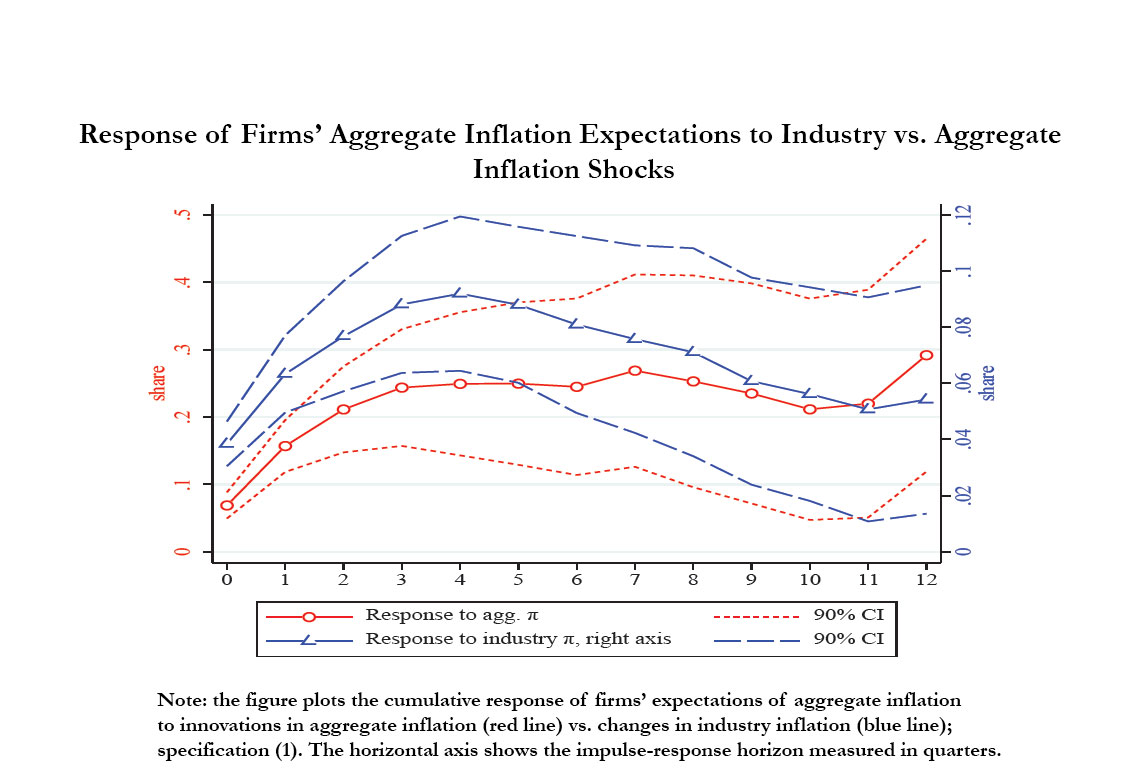 Most modern business cycle models are built on the idea that economic agents have full-information rational expectations (FIRE). While most humans lack the ascribed FIRE abilities, one might think that firms’ executives are much more informed and educated than a typical consumer in the economy so that the central theoretical tenet of the current business cycle research program still serves as a reasonable approximation. We need more facts to establish empirical support for this notion but the growing evidence appears to be discouraging. For example, disagreement among firms about future aggregate conditions is pervasive and large. Where does this disagreement stem from? In principle, firms should be observing similar aggregate statistics and therefore forming similar beliefs about the future. In this paper, we provide new evidence documenting how conditions in a firm’s industry play a key role in shaping their view of broad macro conditions.

We show that - consistent with “island” models, in which firms form beliefs about the aggregate using the industry-specific information they are exposed to - firms’ expectations about aggregate economic conditions respond to shocks to their industry even though these shocks have no aggregate effects. This indicates that firms treat the signals they receive about their industries as informative about the aggregates and rely partly on these signals to form beliefs about macro conditions. To our knowledge, this is the first firm-level evidence confirming a central prediction of this class of models pioneered by Lucas (1972). Firms’ reliance on industry conditions, which are notoriously volatile, to help form aggregate beliefs provides one potential explanation behind the high levels of disagreement about aggregate conditions observed among firms.
We establish these facts using a survey of French manufacturers (Insee). This survey has both a large cross-section of firms that are repeatedly surveyed over time as well as a long time series duration. Firms are asked both about their own conditions and actions (e.g., price and production) as well as their expectations about the future (about their own decisions and the macro outlook). This makes it an ideal survey to study how firms’ expectations and decisions respond to both industry-specific and aggregate shocks.
We first consider how firms’ aggregate expectations respond to industry vs aggregate shocks. We find a striking result: industry-level variation that is orthogonal to aggregate conditions has a pronounced and persistent effect on firms’ aggregate expectations. Figure A reports a positive, persistent and significantly different from 0 response of aggregate expectations to this sectoral inflation shock (blue line). This is striking because our empirical specification includes aggregate variables, so our identifying variation in industry variables is one that has no aggregate effects. Yet firms’ beliefs about the aggregate respond to this industry-specific variation, a clear violation of the full-information rational expectations (FIRE) hypothesis. This result is however consistent with a long line of “island” models in macroeconomics in which firms observe only a subset of prices in the economy with which they transact and use these prices to inform their beliefs about aggregate shocks. These models have been influential in providing potential explanations for monetary non-neutrality or expectations-driven shocks, but there has been little to no empirical evidence on the mechanism underlying these models. We here provide direct evidence of this type of learning taking place among firms.

We also consider the response of firms’ expectations about their own prices and production to both industry and aggregate variation. We find that firms’ expectations about their future price changes respond gradually to each type of variation: the forecast errors of firms are positively serially correlated after changes in both industry and aggregate inflation. This finding is broadly supportive of imperfect information models. Furthermore, we find that the response of firms’ expectations is broadly consistent with their subsequent decisions. For example, firms expect to raise prices quickly after increases in industry inflation and they do indeed raise their prices quickly, more rapidly than they do after changes in aggregate inflation. This is consistent with prior work that prices tend to respond much more rapidly to industry-level shocks than aggregate shocks.