We address the question of whether the heterogeneity in savings is partly due to differences in pension wealth across individuals and across countries, using a European harmonised wealth survey (HFCS) combined with estimates of pension wealth (OECD). First, we find significant displacement effects of mandatory pension wealth on non-pension financial wealth at the mean, and a statistically significant crowd-out estimate on the probability of owning real estate property. Second, there is heterogeneity in the mean savings offset depending on age, risk attitudes and country. Third, the offset follows different patterns along the non-pension wealth distribution across countries. 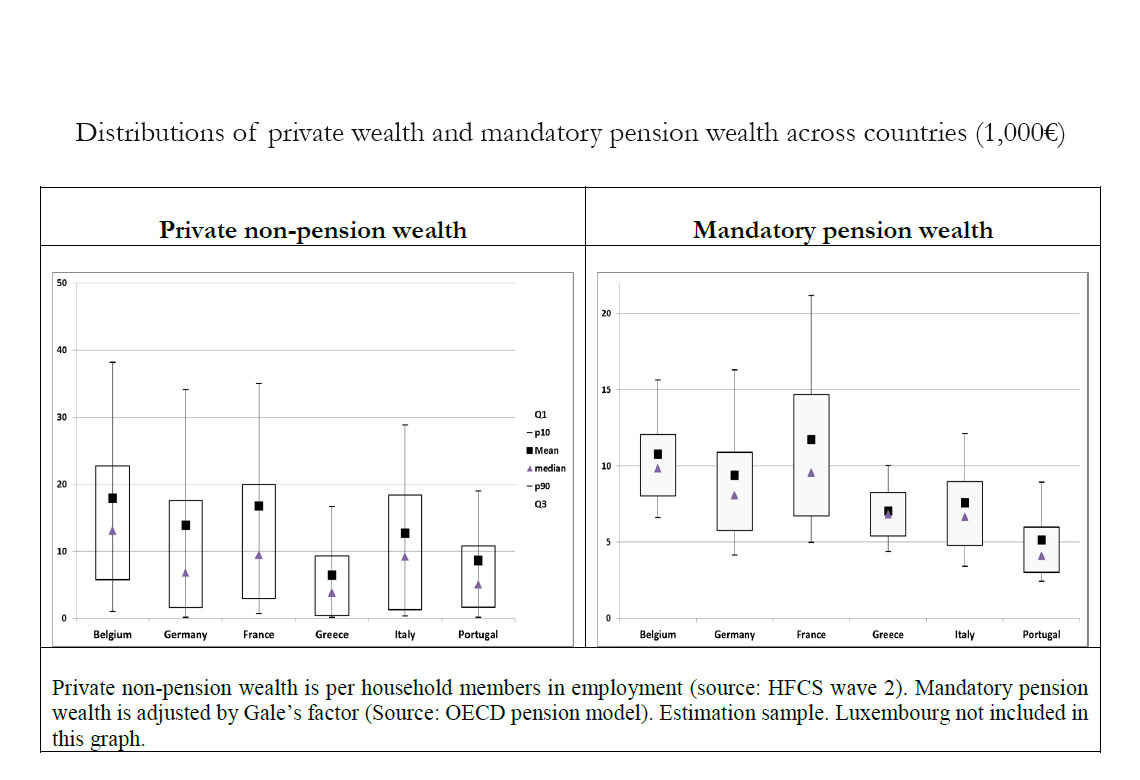 How do pensions affect households’ savings? Due to population ageing and the resulting pension reforms to make pension systems more sustainable implemented in many countries in recent years, income adequacy in old age is becoming a priority. There is however no consensus in the literature on the extent to which mandatory pensions offset private wealth. The empirical evidence on the offset of mandatory pensions by private wealth is mixed. Moreover, several authors suggest that a large heterogeneity in the pension-savings offset across individuals may exist depending on the composition of non-pension wealth, risk and time preferences, borrowing constraints, education, or financial literacy. To some extent, such differences can explain heterogeneity in wealth accumulation behaviours.

This paper addresses the question of whether heterogeneous saving behaviours are partly due to differences in pension wealth across individuals and countries (Figure A). To this end, we estimate the effect of mandatory pension wealth on private wealth at the individual level for seven euro area countries (Belgium, France, Germany, Greece, Italy, Luxembourg and Portugal). We consider a reduced-form equation of wealth accumulation based on the life-cycle framework with pensions. The identification strategy is based on the cross-country differences in pension schemes. One contribution of this paper is to provide country-specific results, taking advantage of the non-linearity in pension schemes at the country level and of differences in pension enrolment across individuals within countries..

The empirical analysis is based on the Household Finance and Consumption Survey (HFCS, see Eurosystem Household Finance and Consumption Network, 2016a). The survey provides harmonised cross-country household-level information about net wealth, income and socio-demographics, along with some information on pension entitlement. This makes it possible to analyse the heterogeneity of the displacement effect for several European countries and for a various range of assets, based on several individual characteristics including risk preferences, and across the non-pension wealth distribution. The pension wealth indicator for mandatory pension schemes for private-sector workers is computed using the OECD pension models (OECD, 2015).

Our estimate suggests that one dollar of additional mandatory pension wealth reduces financial wealth by 53 cents at the mean, which is in line with the results from previous studies. A significant negative offset of pensions on the probability of holding real estate property at the mean is also found. Estimates reveal that the heterogeneity in the mean pension-savings offset varies across ages and depending on attitudes to risk. In particular, the magnitude of the offset is smaller for individuals who claim that they are “willing to take substantial financial risks” than for individuals “not willing to take any financial risk”.

Overall, our results point to a large heterogeneity across European countries with respect to the pension-savings offset, which partly explains cross-country differences in saving behaviours. The pattern of the pension-savings offset along the non-pension wealth distribution varies from country to country. We find however evidence of complementarities between pensions and savings in the bottom deciles in most countries. This result may reflect the fact that less wealthy people tend to save more to finance consumption during old age due to increasing life expectancy and elderly care needs.