Working Paper Series no. 850: The Political Economy of Currency Unions

How can a currency union be sustained when member states have an exit option? This paper derives how fiscal and monetary policies can ensure the survival of a common currency, if countries want to leave the union. A union-wide central bank can prevent a break-up by setting interest rates in favor of the country that wants to exit. I show how a central bank does this by following a monetary rule with state-dependent country weights. The paper then demonstrates in a simulation that a central bank can only sustain the union for a while with this rule, but not permanently and that the best way to sustain the union is through fiscal transfers. 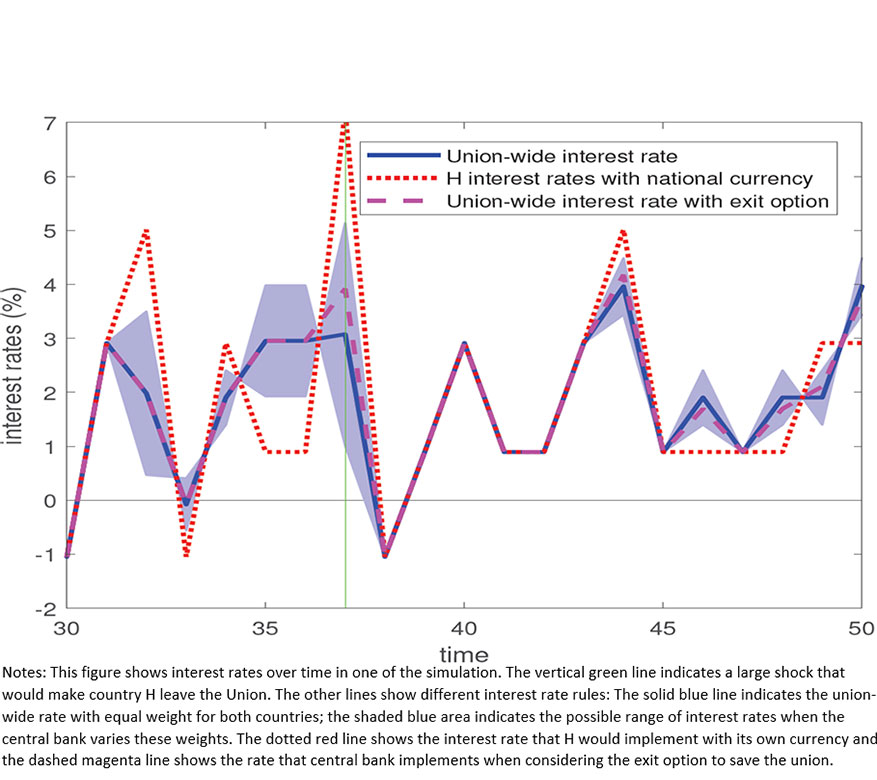 Currency unions, such as the Eurozone, may suffer instability if their membership is not seen as irrevocable. Even though exiting the Eurozone is not foreseen in the Treaty, the Eurozone sovereign debt crisis has forcefully shown that the possibility of a break-up was not fully ruled-out as markets have priced-in the risk of currency devaluations. Next to fiscal policy, the role of the European Central Bank for the currency union has been debated extensively. This poses the question what monetary policy can actually do if the union is confronted with the threat of a break-up. How can a central bank help to make a currency union sustainable? To address this issue, I set up a two-country open economy model that gives governments the option to choose between being in a currency union and having an own national currency. With an own currency, the central bank, if credible can focus on price stability and let the exchange rate float freely. In a currency union there is only one central bank for both countries. The benefit of a common currency is that it facilitates cross-border flows, notably trade. By assumption, if both countries use the same currency, trade costs are reduced and bilateral trade increases. The downside of the currency union is that macroeconomic stabilization is less effective for certain states of the world since a common central bank sets interest rates for the whole union. Therefore, the costs of a currency union are time-varying and in some situations these costs might outweigh the benefits. I use this setup to run an experiment in which I calibrate the economy to simulate and then look at the outcome of four scenarios. In the first scenario, both governments decide freely when they want to leave the currency union. That is the only decision. They take monetary policy and the outside option as given. Once a government leaves the currency union, the union is destroyed forever. In the second scenario, I add a union-wide Ramsey planner who sets lump-sum transfers between countries. The planner considers the member states’ exit option. The idea is to set transfers in such a way that no country takes benefit to leave the union. In the end, under the veil of ignorance, both countries are better off with this transfer scheme as the union survives. As in the first scenario, monetary policy is taken as given by the Ramsey planner. The third scenario considers a union-wide central bank that sets interest rates and takes the exit option of both countries into account. No transfers take place in this scenario. As before, the idea is to set interest rates in such a way that no country takes benefit to leave the union at any point in time. In the fourth and last scenario, I consider a joint monetary and fiscal response with a one-time monetary intervention in the crisis period itself and systematic transfers afterwards. All these four scenarios are run with different amounts of trade gains in a currency union that are consistent with the range of estimates from the literature. Considering a large set of trade gains also takes into account that leaving the union might imply other costs. The goal is to check which policy works depending on the amount of gains coming from the currency union. The paper has three main findings: First, I show how a central bank can prevent a break-upof the currency union by following an interest rule that puts more weight on stabilizing crisis countries that would otherwise exit the union. Second, I highlight that interest rate policy alone is a poor tool to redistribute between countries, as it depends on the synchronicity of business cycles. Furthermore, compensation through interest rates is distortionary. Therefore- and this leads to the third result- the central bank alone can only sustain the union for some time, but if a sequence of sufficiently large asymmetric shocks emerges the union will eventually collapse. I demonstrate how fiscal transfers can sustain the union in the experiment in those situations in which interest rate setting alone cannot.