Working Paper Series no. 745: Population Ageing and the Macroeconomy

We quantify the impact of demographic change on real interest rates, house prices and household debt in an overlapping-generations model. Falling birth and death rates across advanced economies can explain much of the observed fall in real interest rates and the rise in house prices and household debt. Since households maintain relatively high wealth levels throughout retirement, these trends will persist as population ageing continues. Countries ageing relatively slowly, like the US, will increasingly accumulate net foreign liabilities. The availability of housing as an alternative store of value attenuates these trends, while raising the retirement age has limited effects. 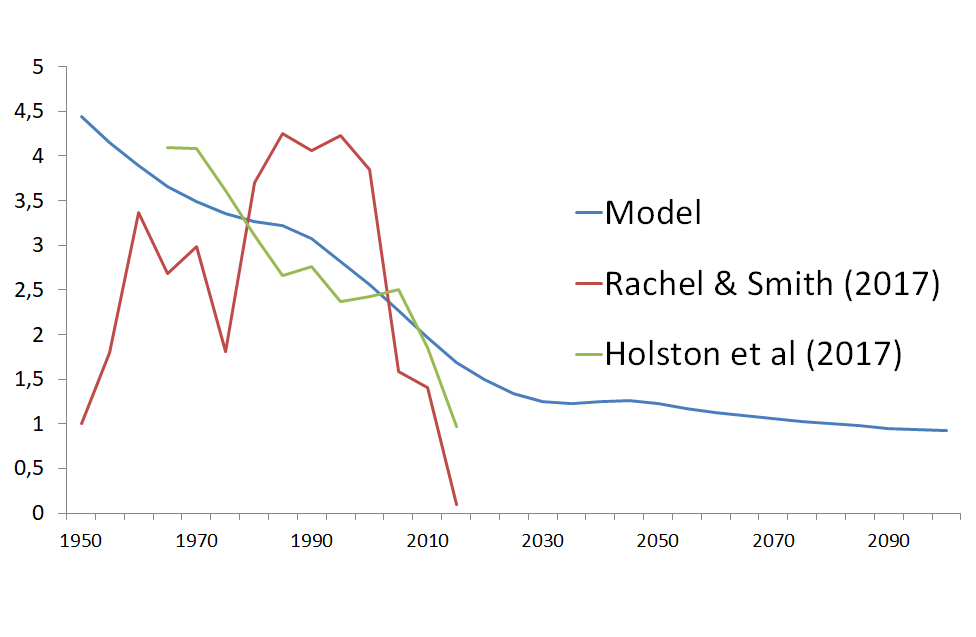 The population of advanced countries has aged rapidly over the past half-century, with life expectancy and the old-age dependency ratio having already reached unprecedented highs and projected to continue to rise for several decades. At the same time, long-term real interest rates have been on a downward trend, while house prices and household debt have risen dramatically. This paper quantifies the link between these important trends and examines the wider macroeconomic implications of demographic change using an overlapping-generations model calibrated for 23 advanced economies. We introduce demographic change as observed in the data in terms of cohort size and death probabilities and we solve for the transition path of the economy, assuming that ageing is the only exogenous change and is perfectly anticipated by the agents.

In the model, demographic change implies a decrease in the annual interest rate by 157 basis points (bps) between 1980 and 2015, and is forecast to push down interest rates by a further 76bps by 2100. Compared to measures of the natural interest rate evolution between 1980 and 2015 obtained from the data, demographics are able to replicate 75% of the roughly 210bps drop estimated by Holston et al. (2017), and around 45% of the fall in the Rachel and Smith (2017) measure.

The key mechanism triggered by the demographic transition is the following. First, households anticipate that they will live longer and spend more time in retirement. They are therefore willing to transfer more of their income during working life to the future, in order to smooth their consumption.  Second, the slower population growth and increased longevity imply that older households make up a larger share of the total population alive at each period. These two changes both increase the level of aggregate savings-to-GDP over time. To keep the capital market balanced given this higher capital supply, the interest rate decreases.

Second, our theoretical set-up allows for a broader diagnostic on the impact of ageing on housing wealth, housing prices, household debt-to-GDP and external net foreign assets position. Besides the utility they derive from housing, households can use it as an additional way of transferring wealth over time, in that it is durable and can be sold to fund consumption and bequests. As the interest rate falls, demand for housing rises, pushing up housing prices and increasing the housing wealth-to-GDP ratio.

To be able to afford the more expensive housing assets, young households have to borrow more, and so the rising house price contributes to the rising household-debt-to-GDP ratio. The lower interest rate also has a similar effect as it encourages more borrowing by the young, raising net household debt-to-GDP. Although this pushes down on aggregate savings-to-GDP, it is not strong enough to compensate the increase in savings implied by the change in the structure of the population, hence the increase in aggregate savings and decrease in interest rate along the transition path.