We study how investors' withdrawals from mutual funds may affect the French corporate bond market. We use monthly data on flows to the French bond and mixed mutual funds as well as a database on their bond holdings at the bond-level from 2011 to 2017 provided by the Banque of France Statistics Department. Using a large sample of French corporate bonds held by funds, we run panel data regressions at the bond-level to explain their yields by macroeconomic variables, such as the sovereign 10-y rate, the short-term rate, the Vstoxx as well as bond-specific variables, such as the residual maturity, liquidity and the issuer’s probability of default. We also account for the corporate securities purchasing programme (CSPP) implemented by the ECB since June 2016 by adding dummy variables on the eligible bonds. Then we add variables related to inflows/outflows to test for several hypotheses. First, our results show that flows to funds affect the yields of all corporate bonds across the board. Second, this effect is asymmetric since outflows have a greater impact on yields than inflows. Third, the greater the funds’ market share in a specific bond the higher the impact on this bond is. These three results are robust to change in econometric specification. Further estimations suggest that withdrawals may raise liquidity premia and ownership by funds could amplify the response of bond yields to financial stress, although these two latter results are not significant in all econometric specifications. 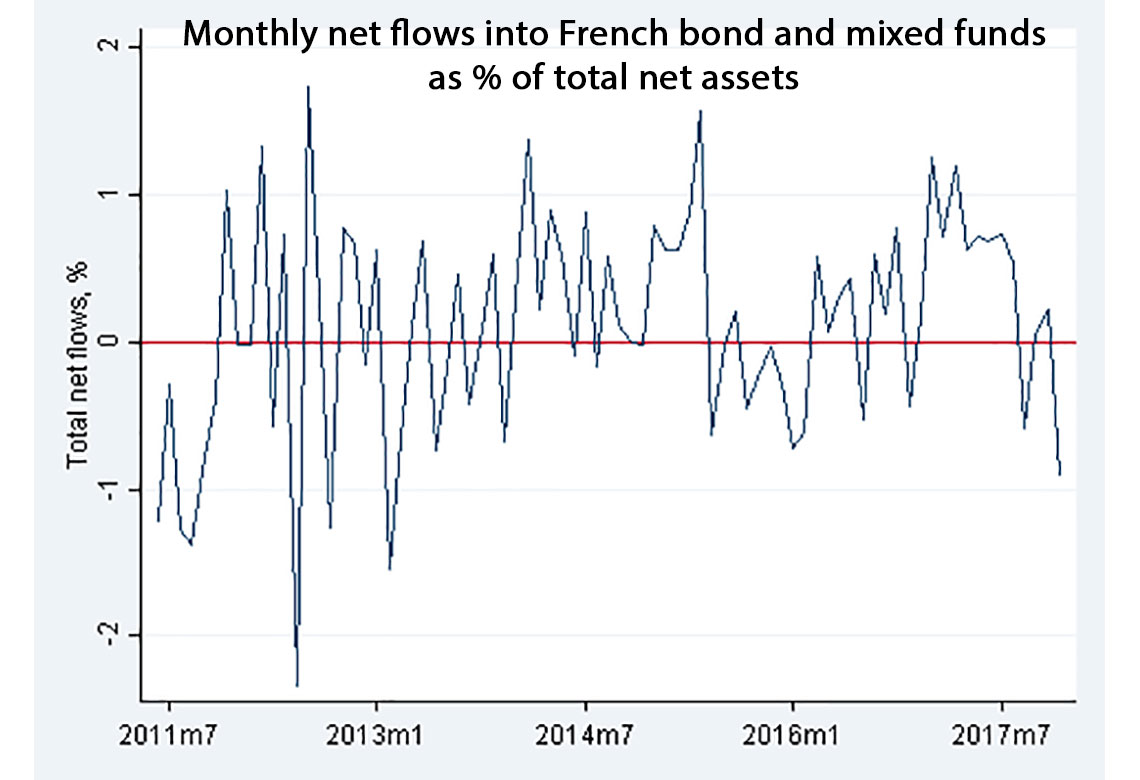 Assets under management (AUM) by investment funds have surged for the last decade in most countries. They amounted to €11 trillion in the euro area in 2017, which is about the size of the annual GDP. French investment funds play an important role in the euro area financial landscape, as they now rank fourth behind Luxembourg, Germany and Ireland, holding 10% of the all euro area funds’ assets (Ponsart and Salvio, 2018).

This significant development in asset management sector due to the low interest rate environment and more market-based finance orientation raises many questions regarding financial stability. A key vulnerability of bond funds involves possible liquidity mismatch between their assets and liabilities particularly in the presence of first-mover advantage. Indeed, when funds with less liquid assets face investors’ fund outflows, they may exert an adverse impact on prices of assets they sell in order to meet investors’ demand. In this paper, we analyze the effects on the French corporate bond market exerted by the French bond and mixed mutual funds that represent about a half of the French asset management sector (€ 638 bn of AUM in 2017).

We use Bank of France monthly data on the total flows in and out of all French bond and mixed funds as well as on the amount of bonds held by these funds at the bond-level from July 2011 to December 2017. Among all the bonds held by these funds, we only retain those issued by French non-financial companies for two reasons. First, there is a substantial home bias that makes French issuers predominant in the funds’ portfolio. Second, the lower liquidity of corporate bonds compared to that of sovereigns or financials incite us to think that their price may be more sensitive to funds’ transactions.

The figure below shows the monthly net flows into French bond and mixed funds weighted by their total net assets from 2011 to 2017.  The net flows turn out to be very volatile, often switching between net inflows and withdrawals. Net redemptions occur in about 40% of the time sample and reached their peak at the height of the European sovereign debt crisis in summer 2012.

The aim of the paper is to identify the effect of these fund net flows on corporate bond yields. To do so, we estimate regressions at the bond-level that explain yields by macroeconomic variables, such as the sovereign 10-y rate, the short-term rate, the Vstoxx as well as  bond-specific variables, such as the residual maturity, liquidity and the issuer’s probability of default. We also account for the corporate securities purchasing programme (CSPP) implemented by the ECB since June 2016 by adding dummy variables on the eligible bonds. More specifically, we test for several hypotheses about the responses of bond yields to net flows of funds at a bond-level. First, we verify that flows in and out of mutual funds affect corporate bond yields. Second, we test for a concave relationship between fund flows and bond prices that may stem from the low liquid nature of corporate bonds. Namely we want to determine if outflows affect bond yields to a greater extent than inflows. Third, we test if the impact on yields due to the funds’ flows is stronger for the bonds that funds hold a larger share of. The estimations strongly confirm these three hypotheses and the results are found robust to changes of econometric specification.

We also test for two additional hypotheses. First, we find some evidence that the yields of less liquid bonds are more sensitive to redemptions. Our data show that when facing redemptions, funds tend to sell all bonds regardless of their liquidity whereas previous studies (Chernenko and Sunderam (2016), Jiang et al. (2018)) showed that outflows touch all asset classes but particularly the most liquid ones (cash-like securities, government bonds, etc.). However, they did not did not study price effects across asset classes. Second, our findings on the adverse effect of greater ownership concentration on the bond yields show some evidence of an amplifying effect however the result is very sensitive to econometric specifications.

Two conclusions are particularly important for financial stability and tend to reinforce some results in the previous literature. First, bond funds exert a significant impact on the bond prices (or yields), especially when facing investors’ redemptions. These results are consistent with the few existing papers for the US (Chernenko and Sunderam, 2016; Choi and Shin, 2016), though studies on the subject are rather scarce. Second, we find that the larger the funds’ holdings in a given bond, the larger the price effect on this bond. This finding may be related to similar results for institutional trading in equity markets (see, e.g., Greenwood and Thesmar, 2011). This draws particular attention to the concentration of asset holdings by one institution or one type of institutions.