Based on French firm-level data over around 15 years we evaluate the contribution of the micro-level profit shifting –through tax haven foreign direct investments to the aggregate productivity slowdown measured in France. We show that firm measured productivity in France declines over the immediate years following the establishment in a tax haven, with an average estimated drop by 3.5% in labor apparent productivity. We argue that this productivity decline, following a presence in a tax haven, is most likely explained by multinationals’ tax optimization, where domestic productivity is underestimated as profits are not recorded anymore in the home country. The fall in productivity is especially strong for firms that are intensive in intangible capital and is equivalent to 4.1% (versus 2.7% for low intangible intensive firms), reflecting the fact that these types of assets are more easily shifted across countries and facilitate tax planning. Our results additionally suggest that the mismeasurement has strong dynamic effects, as the decline becomes more important the longer the firm remains in a tax haven. Finally, given these firms’ weight in the economy, our results imply an 8% loss at the aggregate in terms of the level of the labor productivity throughout the whole sample period, which is equivalent to an annual loss of 9.7% in terms of the aggregate annual labor productivity growth. 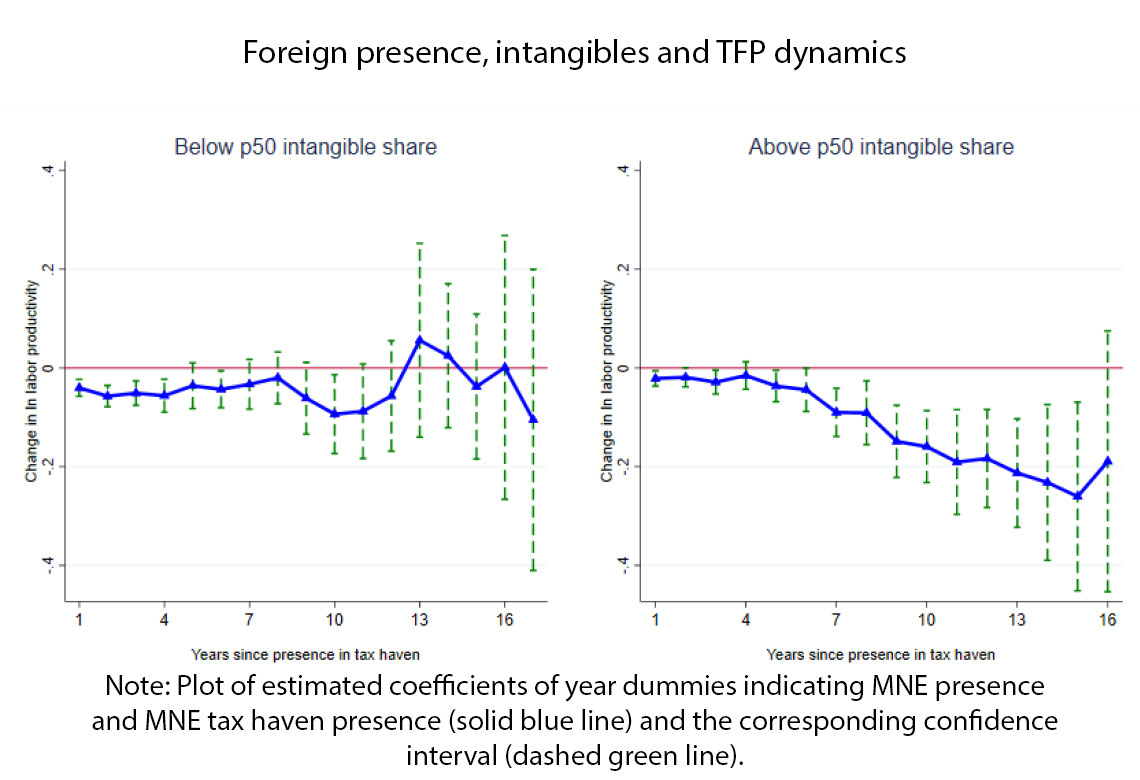 French multinational enterprises (MNEs) have been expanding their activity abroad, including for profit shifting purposes. Yet, tax planning activities may alter the measurement and our understanding of MNEs’ real activity. Dynamics of productivity over time, following tax haven presence, signal a lasting fall for intangible-intensive activities. MNEs are, on average, very big and intangible-intensive firms, which can strategically choose how they book activities within their affiliates around the world, with the potential to significantly distort aggregate statistics. In particular, in a context of deep financial integration and international tax competition, the increasing intangible economy has provided new tools for MNEs to offshore their profits to low tax countries. This, in turn, artificially minimizes activity in high tax countries, underestimating a number of aggregates such as value-added, exports and productivity.

To estimate the magnitude of this phenomenon in France, we use firm-level data, mixing information on firms’ ownership relations (foreign and domestic, related to parents and subsidiaries), balance sheets, trade, workforce and wage bill over 1997 and 2015. A staggered Difference-in-Differences (DiD) is implemented in order to estimate the average effect of profit shifting on the level of firm productivity and its conditionality on intangible assets. Offshore profit shifting is identified from within-firm variation in presence in tax havens across firm intensity in intangible capital, exploiting the precise establishment of firms’ new foreign presence in a tax or non-tax haven country. The dynamic of the productivity effect of firm presence in tax havens is assessed within a Panel Event study, which, by rejecting the existence of a pre-treatment trend, allows showing that the estimates capture the tax haven entry effect and not differential trends between treated and control units.

This analysis results in an average decline by 3.5% in firm labor productivity and 1.3% in firm total factor productivity, which is argued to be most likely due to a productivity mismeasurement resulting from profit shifting. The fall is especially strong for firms that are intensive in intangible capital, where the level of apparent labor productivity (ALP) is on average reduced by 4.1% when a firm becomes a tax haven MNE and belongs to the high intangible-intensive group of firms, while it is on average reduced by 2.7% for low intangible-intensive firms. In the case of total factor productivity (TFP), an average impact of -1.5% is estimated for firms above the median intangible intensity and around -0.9% for lower intangible intensive firms. Additionally, the mismeasurement has strong dynamic effects, as the decline becomes more important the longer the firm remains in a tax haven. For instance, estimates suggest that after 10 years of presence in a tax haven, ALP attains an average 11.7% drop with respect to the years before the tax haven presence, while the respective impact for TFP is around -4.8%. Again, the impact is particularly concentrated among intangible-intensive firms, as shown in the Figures below, which plot the estimated effect TFP for firms above and below the median of intangible intensity (ALP graph gives consistent results).