This paper investigates whether uncertainty about economic policy plays a role in shaping the credibility and reputation of the central bank in the eyes of the public. In particular, we look at the effect of policy uncertainty for the dynamics of citizens’ opinion, being trust, satisfaction or confidence, in the European Central Bank, the Bank of England and the Bank of Japan. Estimating Bayesian VARs for the period 1999-2014, we find that shocks to economic policy uncertainty induce economic contractions and relatively sharp deterioration in trust or satisfaction measures, which in general take longer than economic growth to re-build. 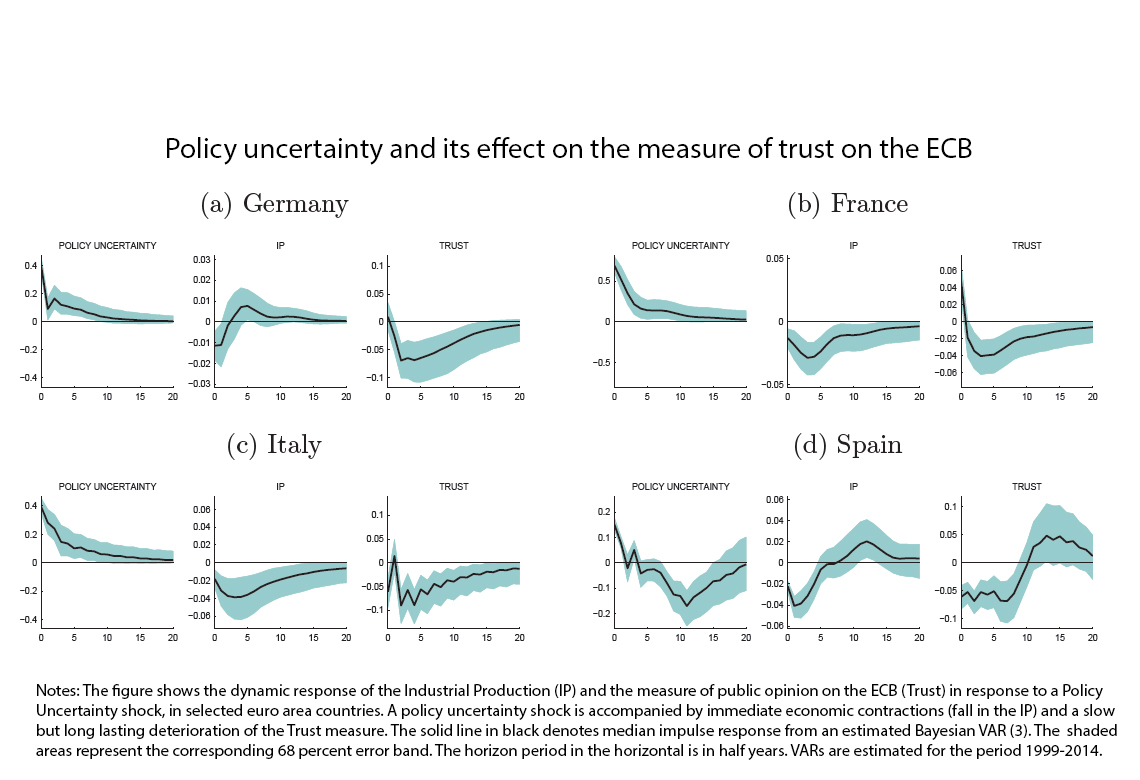 In this paper, we ask whether uncertainty about economic policies plays a role in shaping the credibility and reputation of the central bank in the eyes of the public. To this aim, we study the role of policy uncertainty on survey-based measures of public opinion (trust, satisfaction and confidence) on central banks. Public trust and confidence in central banks are important for the effectiveness of the monetary policy. Trust and credibility are particularly important to have well-anchored inflation expectations, both in good and bad times.
The central banks under our investigation are the European Central Bank (ECB), the Bank of England (BoE) and the Bank of Japan (BoJ). The choice is constrained by the availability of measures of public opinion on central banks. We obtain these measures from the Eurobarometer survey (ECB), the Inflation Attitudes survey (BoE) and the Public Opinion survey (BoJ), respectively. The two latter surveys are published by the respective central banks. These surveys seek to gauge the confidence of citizens on the monetary institution and/or their satisfaction with the way the central bank is doing its job to preserve price stability. To measure policy uncertainty we rely on the news-based Economic Policy Uncertainty (EPU) index of Baker, Bloom and Davis (2016). The EPU captures uncertainty about what policy actions the decision makers will undertake and uncertainty about the economic effects of current and future actions and/or inactions. This can be uncertainty about fiscal, monetary or other regulatory policies.
The hypothesis is that high uncertainty about policies might reduce trust and confidence on the institutions responsible for economic policy. This effect could be both direct and indirect through the effect that uncertainty has on the economy, notably on growth, unemployment and prices. Moreover, positive or negative attitudes on institutions could also affect the response of the economy to high uncertainty, by accelerating or dragging the recovery. We study these dynamic relationships through a Bayesian VAR framework. We link economic policy uncertainty with measures of public opinion on central banks while accounting for variables that seem important for building confidence on such institutions, like the industrial production, inflation and the unemployment rate. We use data for Germany, France, Italy, Spain, and United Kingdom for the period 1999 - 2014 and 2003 – 2014 for Japan.
Overall, we find that shocks to uncertainty induce economic contractions and a relatively sharp deterioration in trust or confidence measures, which generally take longer than economic activity to reverse back to initial levels (see Figure 1). This reinforces the idea that confidence is easy to lose but hard to gain. We observe the strongest drop in trust for Italy, followed by Spain and France. Thus, uncertainty has a negative effect on macroeconomic outcomes (in line with previous studies) but also shapes the dynamics of public opinion on central banks in Europe (the BoE and the ECB). The case of BoJ is not clear from the data.
The deterioration of public confidence in response to heightened policy uncertainty should be worrying for policymakers. In the current environment of low interest rates, trust and credibility in the central bank is even more important for the success of policies that rely on commitment on future actions, like the forward guidance on rates and balance sheet policies.
The uncertainty studied in this paper relates to fiscal, monetary or regulatory policies. Thus, central banks seem to be held accountable even for issues that fall beyond their mandates. In response, a clear central bank communication not only to the specialised audiences but also to a wider public would enhance public understanding and support for central banks.