The paper re-investigates the effects of government spending shocks on the real exchange rate and inflation. In contrast with some previous puzzling results, we find that an increase in government spending appreciates the real exchange rate and is inflationary; besides, it induces a trade balance deficit and a decrease in consumption. The discrepancy with the existing literature lies in the identification of fiscal shocks: embedding a narrative approach in a proxy-SVAR is what makes the difference. Empirical findings are then well explained by a standard estimated open real business cycle model. 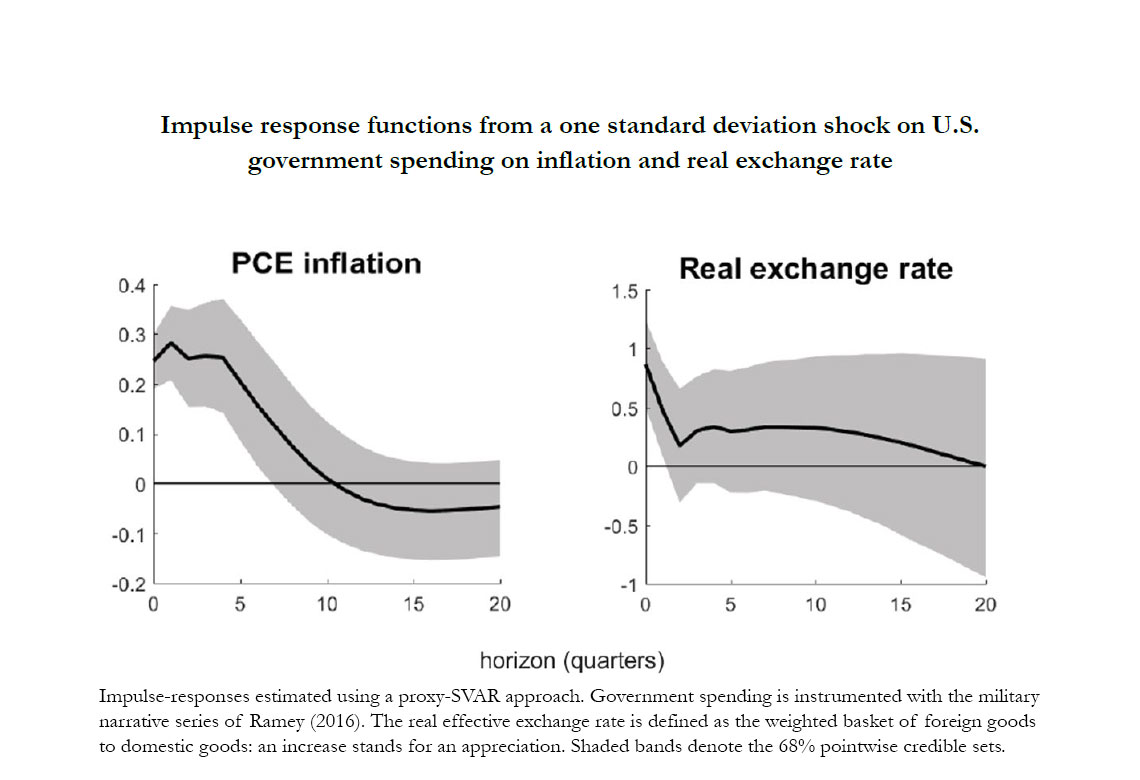 Since the Great Recession, the debate on the role of fiscal policy has gained traction, as discretionary fiscal measures have started afresh to serve as policy tools in advanced economies. The renewed interest in fiscal policy has spurred considerable academic research on its effects. However, despite the importance of the question, there is still no consensus on how inflation and the real exchange rate respond to fiscal shocks. The aim of this paper is to re-examine the implications of fiscal policy for domestic and international variables, starting from the responses of inflation and the real exchange rate.

According to standard theoretical frameworks, whether Real Business Cycle or old and new-Keynesian theories, inflation should increase and the real exchange rate should appreciate in response to an increase in government spending. However, the empirical literature finds mixed results. On inflation, while Edelberg et al. (1999), Zeev and Pappa (2017) and Caldara and Kamps (2017) find that a government spending shock is inflationary, Fatás and Mihov (2001b), Canzoneri et al. (2002), Mountford and Uhlig (2009), Dupor and Li (2015), Ricco et al. (2016), Jorgensen and Ravn (2019) and D’Alessandro et al. (2019) find that the same shock decreases prices/inflation.

On the real exchange rate, Kim and Roubini (2008) found that fiscal expansions depreciate the real exchange rate. This result has then been confirmed by Monacelli and Perotti (2010), Enders, Muller and Scholl (2011), Ravn, Schmitt-Grohe and Uribe (2012) and Ilzetzki, Mendoza and Vegh (2013). However, Auerbach and Gorodnichenko (2016), show that unanticipated shocks to announced military spending cause an appreciation of the U.S. dollar. Moreover, Born et al. (2013), Kim (2015), Forni and Gambetti (2016), Born et al. (2019), Miyamoto, Nguyen and Sheremirov (2019), Boehm (2019) and Lambertini and Proebsting (2019) argue that the response of the exchange rate depends on country characteristics, like the stage of economic development, the exchange rate regime, the timing of the fiscal shock (namely if it is anticipated or not) and the sign or type of fiscal instruments (government consumption or investment).

This paper re-examines and merges the closed and open economy debate by employing a different identification scheme to estimate the impact of fiscal spending shocks on inflation and the real exchange rate. The military narrative series constructed by Ramey (2011) and Ramey (2016a), after having showed that is a valid instrument for unanticipated fiscal shocks, is used into a Vector Auto-Regression, employing the proxy-SVAR methodology developed by Mertens and Ravn (2013) and Stock and Watson (2008). This model is estimated on quarterly United States data using a Bayesian approach over the 1964Q1-2015Q4 period. Using this identification technique, most puzzling results dissolve: government spending shocks are inflationary, appreciate the real exchange rate, worsen the trade balance and decrease private consumption. Multiple robustness checks are also included.

Finally, in order to check the theoretical coherence of our empirical estimates, we set up a standard two-good RBC open economy model and estimate it to match the impulse-responses to a government spending shock. This exercise enables to get an immediate feeling on how far we can go in explaining empirical results with a standard and frictionless framework. Empirical dynamics are aligned with standard theoretical predictions and the responses of an estimated real business cycle small open economy model match extremely well empirical impulse-responses.

The contribution of the paper can be seen as a reconciliation of empirical results with standard theories or, more simply, as an incitement to further research on the joint response of domestic and international prices to fiscal shocks.