Working Paper Series no. 735: The Real Effects of Checks and Balances: Policy Uncertainty and Corporate Investment

This article explores the economic effects of checks and balances on corporate investment and employment. I use U.S. gubernatorial election results from 1978 to 2010 as a source of exogenous variation in whether the party controls both the executive and the legislative branch (unified government) or not (divided government), which determines its ability to implement its political agenda. I find that both public and private firms respond to the political cycle by reducing investment and hiring when government becomes unified. Investment drops by three to five percent in the year following an election resulting in unified government, while stock returns volatility is three percent higher. The findings support the hypothesis that moving from divided to unified government raises policy uncertainty by increasing the probability of future policy changes. Consistent with a real option channel, the effect is stronger for capital intensive firms with lower asset redeployability. 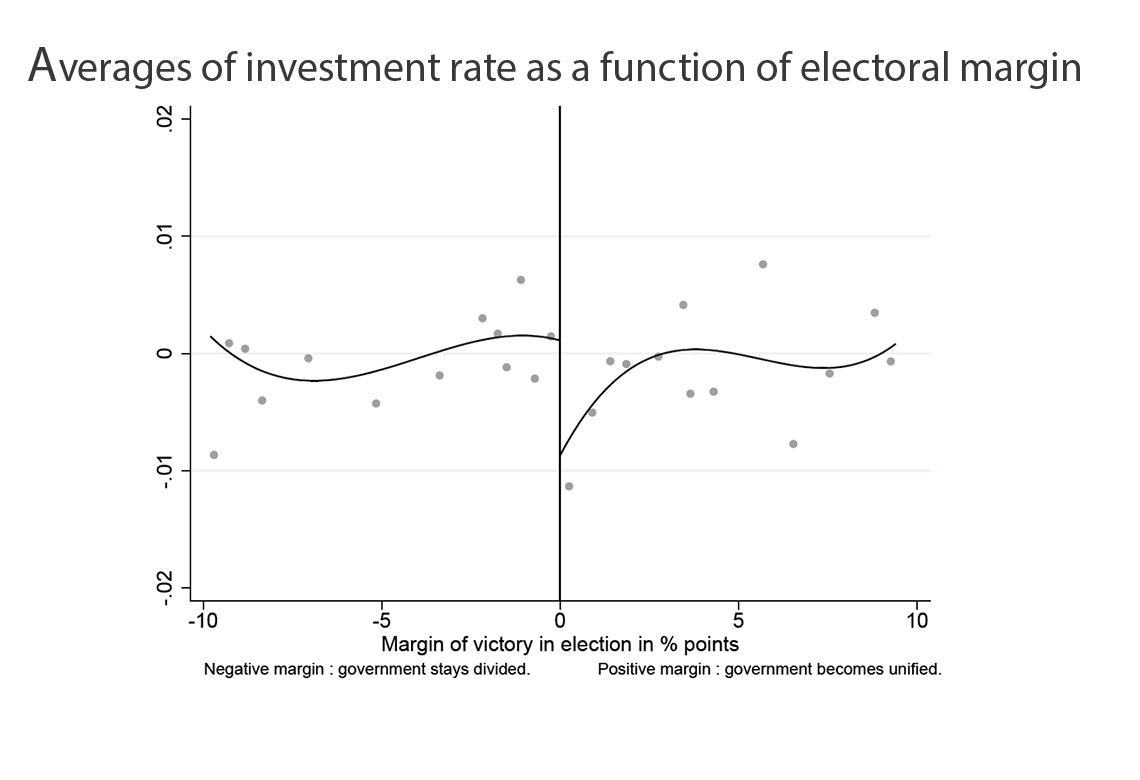 In the wake of the political crisis the U.S. experienced in 2019, which led to a month long partial shutdown of the federal government in January, the question of the economic consequences of having a government controlled by a single party or not - i.e. unified versus divided government - has been widely debated. This question is not specific to the U.S. Several European countries including Germany or Italy have also experienced divided legislatures and the need to form coalition governments in recent years.

The concept of divided /unified government is central to lawmaking because the extent to which a given party fully controls the government affects its ability to pass bills. This ability is materially greater when the elected government is unified. As the likelihood of significant policy changes increases so does policy uncertainty surrounding such changes: uncertainty about which policies will be introduced, about when those policies will be introduced and about the effects of those policies. By contrast, electing a divided government leads to more moderate (economic) policies and a lower probability of significant policy changes.

This paper examines the economic effects of having a unified or a divided government through the lens of policy uncertainty. In particular, I use the elections of U.S. governors (“gubernatorial elections”) as a source of variation in divided or unified government, to help isolate the effect of a political transition from other confounding factors.

My main empirical design exploits the fact that gubernatorial elections in different states occur in different years. This creates changes in divided or unified government, which are staggered over time and across states, for a difference-in-differences research design in which I compare firms headquartered in states that switch to unified or to divided government, with firms headquartered in states that do not experience any changes. In additional results, I use a regression discontinuity design, for a subsample of close elections. I exploit the pseudo-random variation regarding which party wins elections in close races, by comparing those states that became unified because a governor candidate barely won an election and those that stayed divided because a governor candidate barely lost an election.

I document novel and robust evidence that transitions between divided and unified government induce cycles in corporate investment and employment. Specifically, in the year following an election, the corporate investment rate of firms headquartered in states that switch to unified government drops by an average of three to five percent, relative to other firms (see figure). On the employment side, the job creation rate also decreases. The effect is entirely concentrated in the first year after a governor is elected, which is consistent with firms postponing (partially) irreversible investment decisions in presence of uncertainty. The effect is stronger for smaller firms and firms whose operations are concentrated in their state of headquarters, which are more exposed to local policy.

The effects of transitions to divided government on corporate investment are weakly positive; they vary over time conditional on political polarization and can even turn into significantly negative in states where Republican and Democratic party platforms are most ideologically divergent. This suggests that the status quo becomes an undesirable outcome when political polarization is too high - as gridlock will likely dominate any political compromise attempts.
Finally, higher stock returns volatility for firms headquartered in states switching to unified government, combined with higher - negative - sensitivity of investment for capital intensive firms with lower asset redeployability, support the hypothesis that changes in partisan control translate into changes in the degree of policy uncertainty.

My findings suggest that partisan alignment between executive and legislative powers may be as relevant to explain corporate outcomes as partisan preferences over policy through the channel of policy uncertainty. More broadly, these results highlight the interplay between political institutions and corporate decisions and the possibility that checks and balances directly influence firm behavior.